Dr. Masaru Emoto was born in Yokohama in July 1943. He is a graduate of the Yokohama Municipal University’s department of humanities and sciences, with a focus on International Relations. He also graduated from the Open International University as a doctor of Alternative Medicine.
Subsequently he was introduced to the concept of micro-cluster water in the USA, and Magnetic Resonance Analysis technology. The quest thus began to discover the mystery of water.
Dr. Emoto undertook extensive research into water around the planet, not so much as a scientific researcher but more from the perspective of an original thinker. At length he realized that it was in the frozen crystal form that water showed us its true nature.

His book “THE HIDDEN MESSAGES IN WATER” (ISBN-10: 0-7432-8980-3) introduces his revolutionary work. When he first heard that water constantly continues to arrive on the earth from the distant reaches of the universe, he was filled with wonderment.
He discovered that molecules of water are affected by our thoughts, words and feelings. Since humans and the earth are composed mostly of water, his message is one of personal health, global environmental renewal, and a practical plan of peace, that starts with each of us.
His photographs were first featured in his self-published books “Messages from water 1 and 2”. “The Hidden Messages in Water”, was first published in Japan, with over 400.000 copies sold worldwide. (photo front and back of his book).

Dr. Emoto discovered that crystals, formed in frozen water, reveal changes when specific concentrated thoughts are directed towards them. He found that water from clear springs and water that has been exposed to loving words, show brilliant, complex, and colorful snowflake patterns. In contrast, polluted water, or water exposed to negative thoughts, forms incomplete, asymmetrical patterns, with dull colors. He exposed water also to music and found that classical music formed beautiful crystals and for example Hard-rock ugly incomplete crystals.
He also put vials with water on different photographs with beautiful results (see photos 3, 4 and 5). 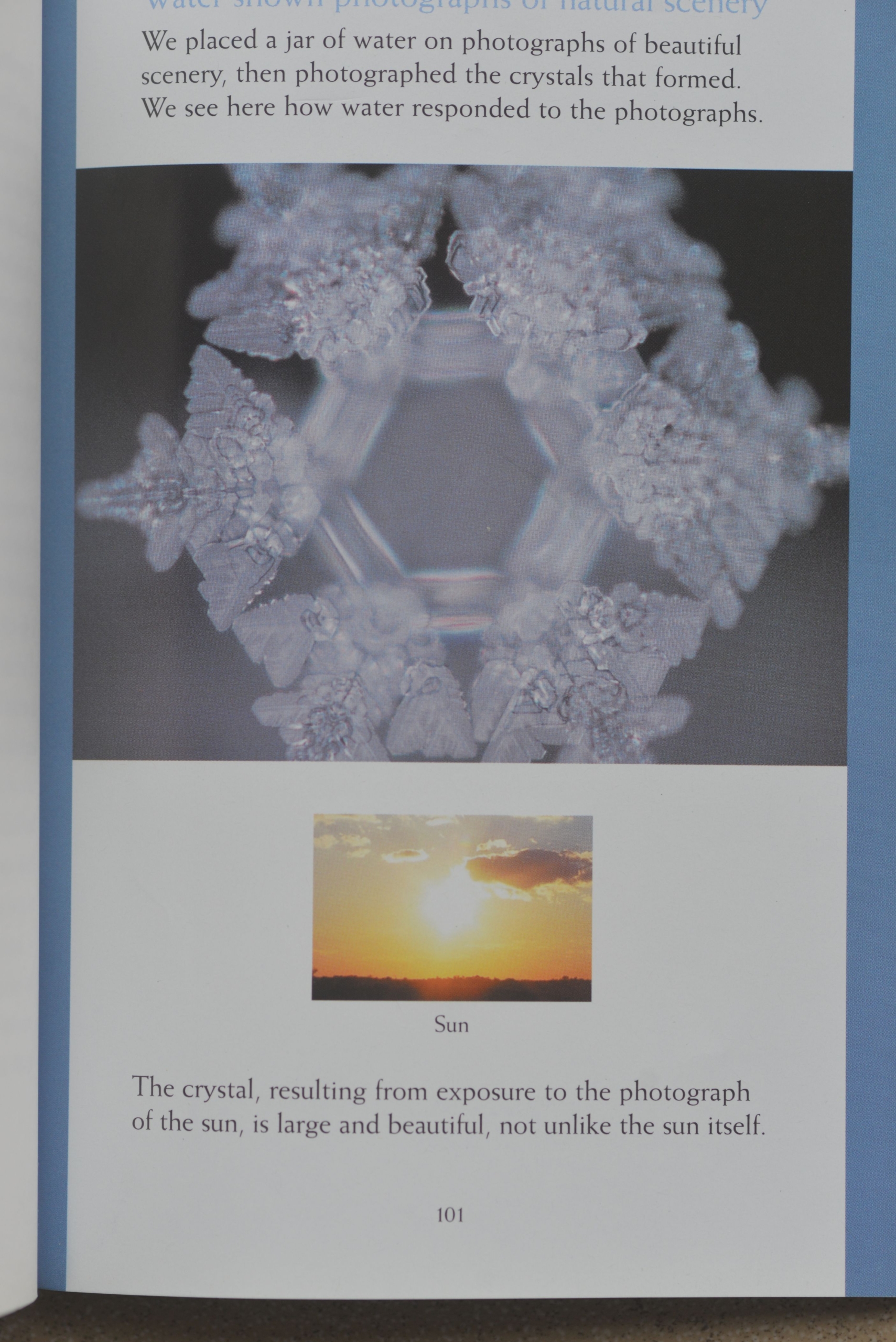 This brought me on the idea to send to his laboratory in Europe a 3D lenticular photograph of the face of Jesus Christ, and ask them to do the research on how the water would react when exposed to the photograph, and what crystals would form. I did not tell that the photograph showed Jesus Christ, taken from the Shroud of Turin. I asked them also to explain what they were seeing in the crystals based on their experience.

A couple of weeks later they sent me the photographs of the crystals that had formed, putting a vial of water on this photograph (3D lenticular), and then freeze it in a special way in their laboratory (See photos 1a, 1b, 2, 3a, 3b, 3c, 4a, 4b) and an e-mail with the following text:

“Dear Petrus Soons,
Well, the pictures were very special. It reminded us throughout the entire testing like
“Star Trek Gates “. The crystals are like the portal into another dimension.
It is difficult to interpret them, but these crystals have been very strong and powerful- and beautiful “. They look like the crystals from the words “Love and Gratitude”.
Best regards
RASMUS

Without knowing what kind of photograph this was, they call the pictures of the crystals “like the portal into another dimension”. That is exactly what the Resurrection stands for! (Isabel Piczek)
Coincidence?? And also looking like the crystals from the words “Love and Gratitude”.

Look at the photographs of the crystals and make up your mind.