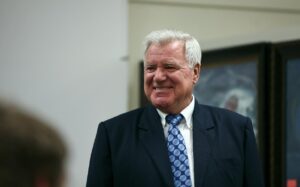 Dr Petrus Soons was born in the Netherlands. He studied Medicine at the University of Utrecht and the Erasmus University in Rotterdam where he graduated as a medical doctor in 1970.
He worked as a General Practitioner in the Netherlands and Curacao, the Netherlands Antilles, and was the Founder and Director of an Ultrasound Clinic in Curacao. He is now retired and since 2001 he lives with his wife Dalys in Volcan, Panama.
Since 2002 he works also as a sculptor in tropical woods and that resulted in 2009 in a sculpture of the Body of Christ based on the 3D studies that he did.
In the year 2004 he began his studies of the Shroud of Turin. He concluded that it was possible to create holograms based on the 3D information embedded in the image. To achieve this objective, he formed a team of 3D experts.
Under his guidance the team performed the following tasks: 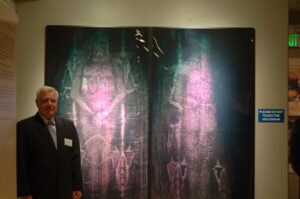 Dr. Soons in front of Holograms

After the team produced the life-size Holograms in 2005 and 2006, he studied them intensively. His studies confirmed many of the previous findings but also revealed some surprises and the discovery of heretofore unknown details.
In November of 2006 he was granted an audience by the Custodian of the Shroud, Cardenal Severino Poletto. He showed the Holograms that his team had produced of the front and the back of the body and also the face to the Cardenal and a group of esteemed Italian Shroud scientists. 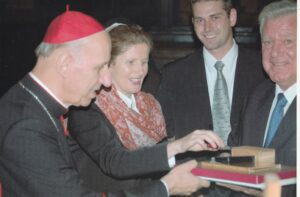 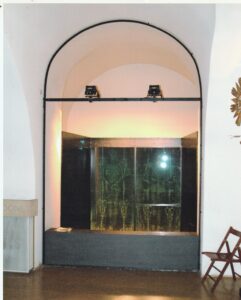 This led to the decision of Cardenal Severino Poletto to place these Holograms as a permanent exhibition in the MUSEO della SINDONE in Turin.
He was also introduced to Don Giuseppe Ghiberti who was in charge of the daily affairs of the Shroud and he brought Dr. Soons in contact with Father Hector Guerra of The Legionaries of Christ. 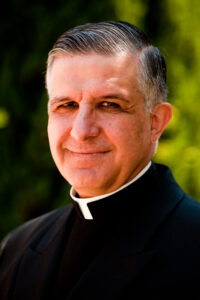 Father Guerra was responsible for creating a series of permanent expositions of the Shroud and he had established already two expositions in:

Dr. Soons donated two sets of Holograms to these expositions.
The close cooperation of Dr. Soons and his sponsor group with Father Hector Guerra resulted in a series of new expositions:

Dr. Soons and Father Guerra cooperated closely until the untimely death of Father Hector Guerra on december 11, 2015 and then Dr. Soons organized very successful expositions in Panama in 2013 and in Tegucigalpa and San Pedro Sula in Honduras in 2016.
As a sculptor he produced many life-size sculptures including a Pieta and Maria with child.
In 2009 he finished an exact copy of the body of Jesus Christ, based on the measurements on the Shroud and the 3D studies that he had conducted. These studies put him in a unique position to reproduce all the anatomical details and the exact position of the body in 3D. 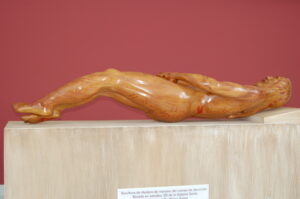 His studies and scientific investigations of the holographic images with the new discoveries have been presented the last couple of years in the USA, Israel, Latin America and Europe.
He has given conferences in:

He participated in the following documentaries about the Shroud:

Dr. Soons is also a member of the Shroud Science Group (SSG) and is continuing with his scientific investigations of the Shroud and giving conferences in different countries. 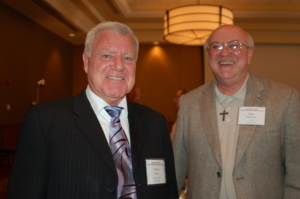