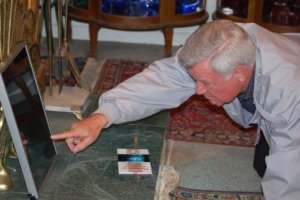 In March of 2006, while studying the first Hologram of the face that was produced by the Dutch Holographic Laboratory (in September of 2005), I discovered for the first time that there was an oval solid object in the neck area under the beard of the Man on the Shroud and that there were, what looked like three Hebrew letters on the surface of this object, in relief. (See photograph 00). I was invited for a meeting with AMSTAR in Kaufman, Texas, in the house of Mike Minor. Isabel Piczek and Tom D’Muhala were also present and the illumination in the room was excellent to see very clearly the hologram and the object under the beard. (see photographs 1). 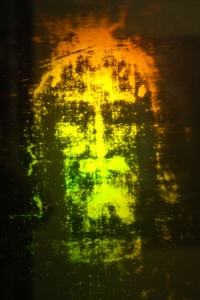 I have to make clear that I do not speak the Hebrew LANGUAGE. However, since I was a young boy, one of my hobbies has been Calligraphy and as the individual Hebrew characters are very beautiful to write, I regularly exercised writing this alphabet, so I was very familiar with the shape and the form of the different letters. Maybe that is the reason that I recognized the shape of these three Hebrew letters.

I was puzzled by the fact that on certain photographs these letters were visible and not on others, so I consulted professional photographers. They told me that because the image is present only on the most superficial one to two fibers of the cloth, (each thinner than a human hair), the FOCUSING OF THE LENS (distance) by the individual photographers is of the utmost importance and that varies from photographer to photographer. Remember that after the fire of 1997, when Aldo Guerreschi (professional photographer) wanted to take a photograph of the face, he had problems focusing. I quote his words: “I approached the face placing my camera at a distance of about 20-30 cm, aimed at the face and saw…………………..nothing in my viewfinder! And yet”, I said, “I know the image by heart” I had to beg my friend to point to the position of the eye because from a distance of 30 cm I could not see it. I could only see it as I moved away from the Shroud. (End quote). (See photograph 2, showing the room in which Aldo Guerreschi after the fire in 1997 made his photographs). 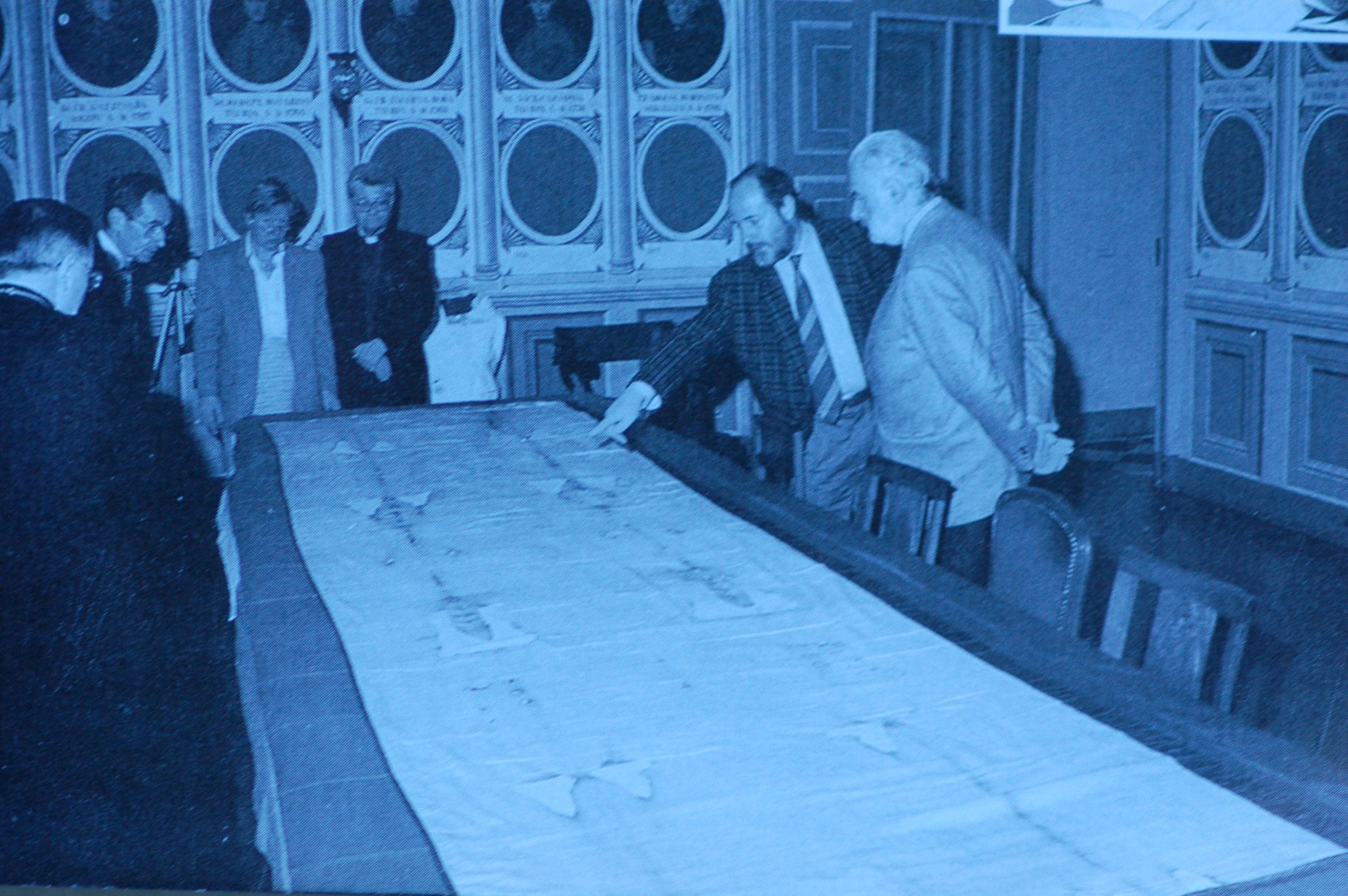 The second fact to remember that is very important when taking photographs (of the Shroud face) is the lighting. It makes quite a difference if one uses direct lighting, lighting under certain angles or striking light, ultra-violet or infrared light. It is very interesting to see that the letters show up in the majority of the photographs taken by Vernon Miller and Barrie Schwortz during the 1978 STURP investigations. Both were professional technical photographers and together built a mechanism on a rail to control the distance of the camera to the Shroud and had of course complete control over whatever lighting conditions they wanted to create. On the Enrie photographs one can see the shape of the solid object very well, however the individual letters are not visible. Enrie worked under different conditions than did Barrie Schwortz and Vernon Miller.

The next images (3 and 4) were based on photographs made by Barrie Schwortz . ((©) 1978-2010 Barrie M. Schwortz Collection, STERA Inc.) and photograph 5 was taken by Vernon Miller, Chief technical Photographer of the STURP-team 1978. They all show the three letters on the surface of the oval solid object. 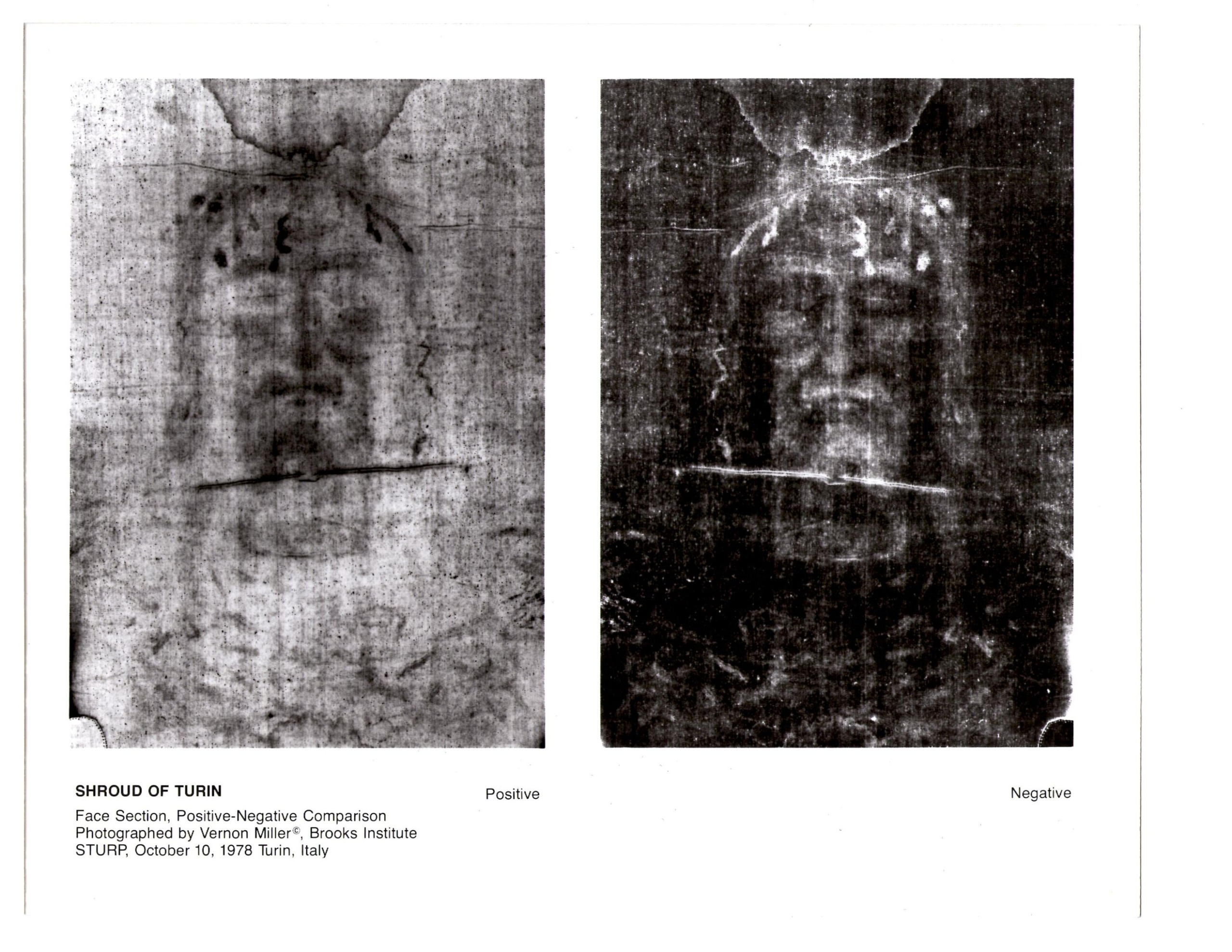 In 2007 I asked Bernardo Galmarini (3D specialist, Argentina) to do a conversion of the head, with special focus on the region of the neck area and that resulted in an anaglyph photograph. To see the 3D of this photograph you will have to use 3D glasses (red glass in front of the left eye) and you will be able to see the oval solid object in 3D relief, like floating, with on the surface, seemingly also in relief the three letters.(See image 6). 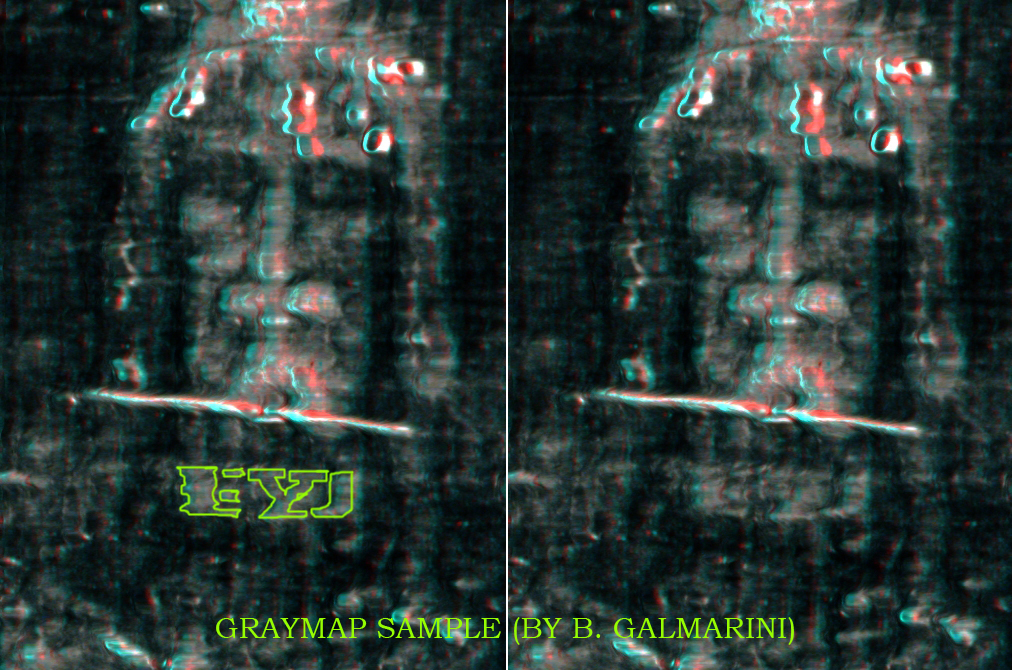 In the next photograph of the face (image 7) the letters are marked in red and the way we think that the solid object was lying in the neck area of the body of the Man on the Shroud is shown on the sculpture. (Image 8).

THE THREE HEBREW LETTERS:
Hebrew is a language that is written and read from the right to the left. So the three letters that are visible are from right to left:
TS’ADE—ALEPH—NUN (see image 9) 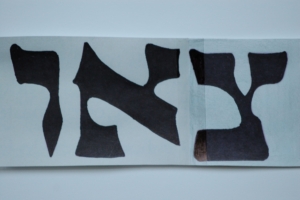 An example of such a solid oval object with in relief on the surface three letters you can see in the image 10, which I bought in Jerusalem in a shop with religious objects in the Jewish Quarter of the Old City. 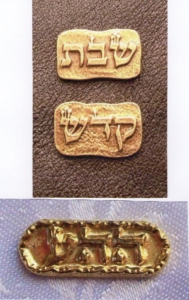 Image 10. Amulet image at bottom with similar shape and in relief 3 letters

I consulted experts in Hebrew in Jerusalem, Rome and the Oriental Institute in Oxford to ask for the meaning of these letters, or if they formed a known word. Most experts did not want to give a definitive answer, because they all wanted very detailed photographs of the letters, and better then what we showed to them, you cannot extract from the Shroud with the existing techniques. In Jerusalem our expert showed me the dictionary of ERNEST KLEIN, “A Comprehensive Etymological Dictionary of the Hebrew Language for Readers of English” and told me that these letters formed the word TS’ON, and also “A dictionary of the Targum, The Talmud Babli and Yerushalmi and the Midrashic Literature by MARCUS JASTROW, and told me that these letters formed the word TS’ON. (see figure 11, 12 and 13).

According to these dictionaries the meaning of the word TS’ON is: “small cattle, sheep and goats”.
I started to look for a meaning of this word, which could relate it to the image of the Man on the Shroud and automatically ended up with the Gospel of JOHN 10:11: “The Good Shepherd”. (John of course is the best eyewitness because he was present at the Last Supper, the Crucifixion and the burial in the tomb on Friday afternoon, and on Sunday morning, together with Peter, he was also present in the tomb, after the Resurrection). In “The Good Shepherd”, Christ is saying: “I am the gate for the sheep; whoever enters through me will be saved”……………………………..”I am the good Shepherd; I know my sheep and my sheep know me—just as the Father knows me and I know the Father—-and I lay down my life for the sheep ( this is an insight into his worldwide mission—to die for the sins of the world). I have other sheep that are not of this sheep pen (The “other sheep” were non-Jews. Jesus came to save Gentiles as well as Jews, that is why he is the Messiah), I must bring them also. They too will listen to my voice, and there shall be one flock and one shepherd. The reason my Father loves me is that I lay down my life—-only to take it up again. No one takes it from me, but I lay it down of my own accord, I have authority to lay it down and authority to take it up again. This command I received from my Father”

So, we see a direct connection between the Good Shepherd, WHICH IS JESUS CHRIST and the word TS’ON. Jesus is mentioning here not only that he is the Shepherd, but also mentions that his mission was, to save everybody in this world, not only the Jews but also the Gentiles, he talks about his death and also about his Resurrection. Moreover, the Prophet EZEKIEL, in predicting the coming of the MESSIAH, called him a SHEPHERD (Ezekiel 34:23)). (See figure 14 and 15, the Good Shepherd).

There is however something more with the word TS’ON. Like we mentioned before, in KLEIN’s dictionary it is translated as: “small cattle, sheep and goats”. (This is like saying “soldiers” instead of army and TS’ON is NOT a flock but “sheep and goats”).
The EXCEPTION for the translation of the word TS’ON, we find in Exodus 12:21.

When the Israelites are ordered by God to prepare a lamb for sacrifice and after the sacrifice put the blood on the doorposts, the word that is used for lamb is SEH (Exodus 12:3) and that is correct. However, in Exodus 12:21 it says: “Then Moses summoned all the elders of Israel and said to them, “Go at once and select the animals for your families and slaughter the (Passover) lamb”. The word that is used in the Bible is TS’ON and this is the ONLY TIME in the whole of the Bible that the word TS’ON is used as lamb and it is specifically translated as such for this occasion. In the Judaic Tradition this sentence in Exodus 12:21 is also understood (translated) as: “MAKE A SIGN WITH THE LAMB”, (By putting the blood of the lamb on the doorpost). The reason for this is that there is a very close relationship in the root and also in the sound, between the word TS’ON and the word TS’IOEN, and this word means “sign”. In the Judaic Tradition when words have the same root and/or sound, they are like “family of each other” and are very closely related in meaning and use.
So, we find again a direct connection between the word TS’ON, and Jesus Christ, who is the Passover lamb, dying at the moment on Friday afternoon when in the Temple the sacrifice of the lambs took place. “The Lamb of God that takes away the sins of this world”. (See figure 16 and 17, the Passover Lamb).

The early Church Fathers were very clear in their opinion, that Our Lord Jesus Christ WAS the Passover Lamb.

The content of this article is completely my personal interpretation. I believe that this finding on the image of the Shroud of Turin is very important. An oval shaped solid object under the beard of the Man on the Shroud, containing three Hebrew letters that form the word TS’ON and indicating a very strong and direct link to Jesus Christ.

I would like to thank Bishop Jacob Barclay, Jerusalem, for his encouragement and help, regarding the solid oval object and the three letters. (figure 18 and 19).

(In the PowerPoint Presentation of the 3D qualities (5.7), you can also see a series of photographs that show the solid oval object with the three letters in relief and the meaning of these letters).