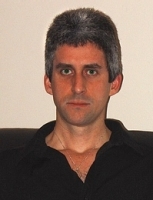 WORK DONE DURING THE LAST 10 YEARS:

—-Years 2001 to 2002: Series of more than thirty 2d to 3d conversions of famous paintings, which are being sold in the following website: http://www.snap3d.com/famous.php/
—-Year 2003: Development of my own 2d to 3d conversion method for “3d- Lenticular” format. This format is produced with a plastic sheet with micro-lenses, which allows to see the images in three dimensions without 3d glasses.

—-November 2001: Editing of an article for the “British Journal of Photography” about the stereoscopic 2d to 3d conversion of photographs and paintings (UK).
—- Year 2003: 2d to 3d conversions of LEONARDO DA VINCI paintings, for the exposition: ”Leonardo y las Ciencias” in the Madrid Museum in Spain. Format: Polarized Projection on a 6m x 4m screen.
—-September 2004: Participation in an educative stereo movie for www.3dstereo.com.pl with 2d to 3d conversions of famous paintings. (Poland) —-Year 2004: Co-development, in collaboration with Dr. Imre Zsolnai-Nagy (Hungary), of an optimized Image Processing method for “Color Anaglyph” method. The system is called “Analux 3d”, which is incorporated in two of the most famous freeware stereo softwares: “Anabuilder’ in France and “Stereo Photo Maker” in Japan.
Since 2004, HONORARY MEMBER of the “Societa Stereoscopica Italiana” by unanimous vote. (http://www.ssi-3d.it/) —-Years 2004-2005: Development of a new optimized version of “Analux 3d”, with own parameters and much improved results.

THE FOLOWING PART IS THE WORK THAT BERNARDO DID ON MY REQUEST ON THE SHROUD IMAGE, THE CONVERSION FROM 2D TO 3D.

—- Since 2008 until today, Bernardo Galmarini’s photographs and stereoscopic 3d work has been published in newspapers, books, catalogs, brochures and magazines. Some of these publications are: “The British Journal of Photography” (UK), “Svet Magazine” (Czech Republic), “Photo Plus Magazine” (UK), the “New York Post” (USA), “Freeze Magazine” (USA).