In November of 2004 I had an accident and fractured a vertebra. At that particular moment I wanted to start sculpting a PIETA but my recovery took 5 months and I was unable to work, so I decided to look for the most original face of Jesus Christ and his mother Mary in the Internet, and then using these images for the sculpture. When you look for these faces you end up automatically with what are called the “acheiropoeita”, or “images not made by human hands”. They are, the image of the Virgen de Guadalupe on the Tilma of the Indian Juan Diego in Mexico City and the image of the Man on the Shroud of Turin. I then started to study many books written about the Shroud of Turin during my 5 months of rehabilitation. I was rather familiar with the 3D concept because I founded, and for many years worked in an ULTRASOUND CENTER in Curacao, the Netherlands Antilles, and had the opportunity to follow from the beginning of the eighties of last century the development of this particular 3D technique. I also studied the theory of the HOLOGRAPHIC UNIVERSE (Dr. Susskind, Gerard van “t Hooft and Dr. Wheeler), and was very familiar with the concept of Holography. With this expertise in mind, there were two observations that caught my attention.
The first observation was: with the knowledge that there was a cloth-to-body distance information present, it should be possible to CREATE HOLOGRAMS based on this information in the image, after conversion from 2D to 3D.

The second observations that caught my attention were:
1) The image on the Shroud appears more distinct at a distance and fades when viewed at certain angles, particularly as one comes closer to the Shroud. The image is faint, without well-defined boundaries so the eye has no point of reference and it appears simply as variation of the background density. In addition, you’re viewing only a small portion of the entire image up close. In a way, it is out of context and it is only as you back away that it is seen as part of the bigger picture that gives it meaning. This is the classical explanation of this observation. HOWEVER, it is also a HOLOGRAPHIC OBSERVATION. If you stand in front of a large hologram, where thanks to the angle of the lighting you are able to see the image, and you back up or come close or go to the side for that matter, the image becomes very vague or disappears completely.
2) After the fire in the Basilica of San Juan Batista in 1997, the Shroud that had been saved by the Fire Brigade of Turin, was brought to the residence of the Custodian to investigate it for damage that might have been caused by the fire. ALDO GUERRESCHI, a professional photographer, who was very familiar with the Shroud image because he had worked for many years with Giuseppe Enrie in Turin, was asked to photo-document the examination of the Shroud, to determine the state of the sheet and to photograph possible damage to it. He published in 2000 after the International Convention of Sindonological Studies (San Felice Circeo) an article: “The Turin Shroud: from the photo to the three-dimensional”. I quote from this article:
3) “ I therefore had the good fortune to see the Shroud in close up for a whole day. When this sheet was enrolled on a long table (with light coming only from one side of the room where there were windows high up), I realized that everything that I had learned up to that point was worth nothing: the image that I thought I knew was not that one. While photography has the advantage of fixing an image in time and of concentrating it so that whichever angle you look at it from, it will remain the same, with the Shroud that is not the case. Moving around that table (lighting under an angle from one side only !), from a certain angle I saw this image so faded as if to practically disappear, while from others it seemed as if the figure WAS ALMOST OUTSIDE THE SHEET: it was, I repeat, an incredible emotion. At that moment I knew that this image was unique. I approached the face placing my camera at a distance of about 20-30 cm, aimed the camera at the face and saw…………………nothing in my viewfinder”. “And yet “, I said, “ I know it by heart”. I had to beg my friend to point to the position of the eye, because from a distance of 30 cm, I could not see it. I could only see it as I moved away from it”. (Aldo Guerreschi confirmed to me personally these observations during a meeting in Turin in 2008). In Holography the angle of the light is very important to see the hologram, and he wrote me a mail in 2008:

“ Concerning the question that you asked me on the light that illuminated the Shroud that was horizontally laid out on a table. I remember only a light from the windows, at a distance of 3 to 4 meters, higher op the wall, not very strong and only from one side, parallel to the Shroud”. These observations are again having a very strong HOLOGRAPHIC QUALITY. 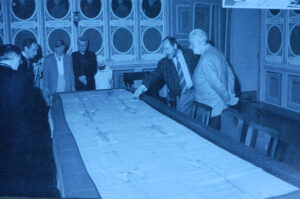 Checking Shroud for damages after 1997 fire

All these observations pointed to the fact that there is a great probability, that apart from the 3D-distance information in the grey-scale of the image there could also be holographic information hidden in the Shroud. Now, holography is based on a fixed interference pattern of two light waves, the object beam and the reference beam (laser light), and the medium to fixate that pattern is a special holographic film. How there can exist an interference pattern in a linen cloth is basically unexplainable and we are working on finding a solution for these problems. Another factor would be, if there is an interference pattern present, how to activate that. But it makes for nice science to solve all these obstacles!

Just recently I found an article in which theoretical physicist SUE BENSON advanced the idea, that the Shroud image may be more than a negative and a 3D encoding. It may actually be a quantum hologram. Quantum holography, still very theoretical, is getting considerable attention in research laboratories as prestigious as IBM, in search of new ways for storing and retrieving large amounts of information. Benson, in an article in the December/January 2001 issue of Journal of Theoretics, describes macro-level quantum holography that may be applicable to the formation of the Shroud image. Quantum holographs should produce three-dimensional information as well as negativity and may very well offer some quantum event explanation of how the image was formed.

There are not many people, including scientists, that know exactly how holography works and what the consequences would be for the Shroud studies, so in the beginning of 2005 I decided to find a laboratory that could create these holograms of the face and the body on the Shroud and having these holograms it would be much easier to explain the holographic ideas for Shroud studies behind it. I was born in the Netherlands and contacted the Dutch Holographic Laboratory in Eindhoven and had a meeting with Walter Spierings, the owner. After lots of brainstorming we decided to form a team of experts for the six different steps that it would take to produce the holograms and that was achieved in 2005 and resulted in the production of the first hologram of the face in September of 2005.

THE DIFFERENT STEPS INVOLVED IN THE PRODUCTION OF THE HOLOGRAMS:

1) PHOTOGRAPHS Photographs being used were 1st and 2nd generation copies of the Enrie photographs of 1931.

2) DIGITAZATION The photographs were digitized with 7000×10.000 pixels.
3) BARRIE SCHWORTZ EXPERTISE Solution for the image-less area on the right side of the face.
4) 2D to 3D CONVERSION Done by Bernardo Galmarini in Argentina and later perfected by the Dutch Holographic Laboratory.
5) CREATION OF THE MASTER HOLOGRAM Dutch Holographic Laboratory.
6) COPIES OF MASTERS Also other 3D products, lenticulars, anaglyph photographs.