In November of 2006 during the audience in Turin with Cardenal Severino Poletto and a group of Italian Shroud scientists where I showed for the first time the life-size Holograms, the Cardenal decided that these life-size Holograms of the front and the back of the body should be placed in the Museo della Sindone in Turin. Three months later they were installed in the Museo.
During a visit to Turin in the spring of 2007 I had a meeting with Don Giuseppe Ghiberti, and he suggested to me that I should contact Father Hector Guerra L.C. He told me that since 2005 Father Guerra was involved in the realization of permanent exhibitions of the Shroud of Turin. The first exhibition was inaugurated in the Notre Dame Center, July 22nd , 2006 in Jerusalem and is a must for the pilgrims visiting the Holy Land. After that he managed to realize the next permanent exhibition in the Universitate Europeo di Roma, Regina Apostolorum and in February of 2010 the next exhibition was inaugurated in the National Shrine of OUR LADY of GUADALUPE in Sacramento-CA, USA. He had the support and cooperation of the authorities in Turin and Gian Maria Zaccone and Bruno Barberis were very helpful in the setting up of these exhibitions. I contacted Father Guerra after my return from Turin and out of that grew a friendship and cooperation. Father Guerra decided also to place the life-size Holograms of the front and the back of the body in these permanent exhibitions. The name of the exhibition is: “WHO IS THE MAN OF THE SHROUD ?”, giving the visitors all the information about the Shroud and in the end letting them decide what to believe or not.
Father Guerra inaugurated in 2010 also a travelling exhibition in Curitiba, Brasil and is preparing these travelling exhibitions also in the Netherlands and Germany-Austria and another permanent exhibition in Columbia.
Following are some photographs of some of the permanent exhibitions: 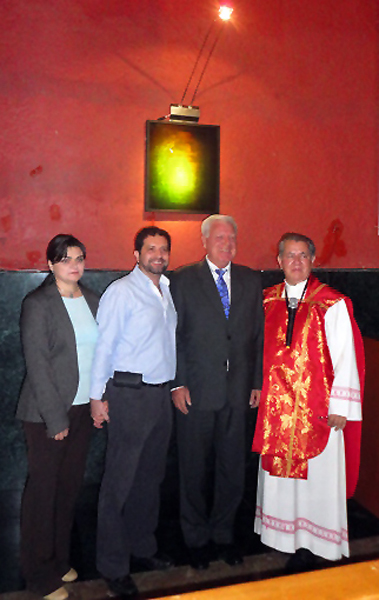