The holographic and anaglyph images that we produced in 2006 and 2007 are still being investigated. One has to be very careful with the interpretations. To give some examples where we found 3D reliefs in the images and are looking for an interpretation of what that could be, look at the photographs:

1) Figure 1 shows the region of the hands. In the wrist area of the anatomical left hand, between the wrist-wound and the metacarpalia (mid-hand bones) that are visible, we can see a 3D relief, that looks like a rope. That would show that the wrists were bound together here and that the arms were not tied to the body. Figure 2 is an anaglyph photo of the same region (use the 3D glasses) This is of course not a final explanation!!
2) Figure 3, shows also a 3D relief on top of the fingers of the left anatomical hand where parts of the fingers are not visible. This has the shape of a little bottle, upside down, with a tap (ampulla). Again, this is only to show that there are abnormalities in the 3D image, but we do not pretend to have a final explanation.
3) Figure 4 shows the same region with now a different explanation. This time we drew the 3D relief in the shape of a flower on top of the ampulla. Again, this is not a final explanation, it is a possibility.

Of great interest in the 3D studies are the image-less areas, for example: under the beard, in the area under the solid oval object with the three letters (See figure 5, Anaglyph image use 3D glasses), the sides of the face (see 3.4 Barrie Schwortz and 6.11 Avinoam Danin for explanation), the areas around the hands and the lower parts of the arms, the sides of the upper legs, especially the right anatomical upper leg, and the lower parts of the legs. 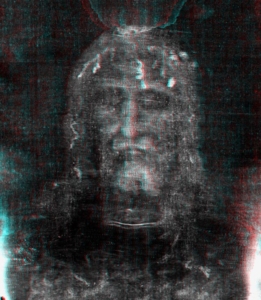 We know from the STURP investigations in 1978 (Adler c.s.), that under the blood spots there is no image. We know also from the investigations of the Israeli botanist Prof. Avinoam Danin, that there are present flower- and plant images on the Shroud and also on the body- image. It is realistic to state, that the formation of the body-image was seemingly blocked by the presence of the blood and the flowers. That means also that whatever “energy” or process that formed the image, that this “energy” seemingly originated from the inside of the body (or the surface) in an up-downward direction (collimated) and was blocked by the presence of solid objects like the blood, flowers or plants.

So, for the 3D investigations the image-less areas are of the utmost importance, because the question is basically: Was there something solid present in these image-less areas, that blocked the formation of the body-image? And if so, can we see in the 3D what that was?
So, the research is only beginning, and we are developing more sophisticated 3D techniques of 3D conversion and imaging.

An interesting discovery when doing the 3D research is the following: When Bernardo Galmarini, the 3D specialist from Argentina, started with the conversion of the image from 2D to 3D, he first took away the bloodspots in a complete “layer”, because these bloodspots contained a lot of “digital noise” but no 3D information in their grayscale. They were probably formed by direct contact between the wounds and the linen, so they were not part of the grayscale of the image. After finalizing the conversion to three dimensions, this layer, containing the bloodspots was carefully repositioned on top of the 3D image of the body and it was interesting to note that they ended up anatomically correct. The blood in the hair for example, ended up again IN the hair and not on the side of the face, where some investigators concluded that they should have been. (see again figure 5, USE 3D GLASSES)

So, basically we are still in the research stage and hope to use more sophisticated 3D techniques to do the next part of the research.