The Shroud of Turin is a piece of linen 442.5 cm (441.5 cm) long and 113 cm (113.7 cm) wide. These are the measurements of this linen after the restoration of 2002 and done by Bruno Barberis and Gian Maria Zaccone. The fabric is hand-woven and handspun in a herringbone pattern and bears different images. The most notable are the front and back images of a crucified man, head to head, with the feet of both images facing to the outside of the cloth. Further, the image has a number of burn holes, as well of water-stains. The burn holes are on the side of the body image and result from a fire in 1532 in Chambery in the south of France. Other burn marks include the so-called poker holes for which no dating is known. 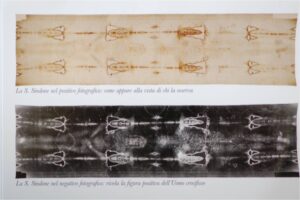 Positive and negative image of the Shroud

Both a front and a back image are present because the crucified man was laid out on one end of the 4 meter linen sheet. The opposite end of the Shroud was then doubled over the top of the head, over the face and down to the front of the body.

Positive image of the Shroud

The body is naked, bearded and long-haired. The face has a mask-like appearance with the eyes representing an owl-eyed look. In the frontal view the forehead area shows blood in the form of a reverse “figure-3” pattern, with small spots of blood on the left and right of the forehead and in the hair, all representing bleeding from the crown of thorns. The back and top of the head also show bloodspots, as a result of the sharp thorns. The hair in the frontal image is forward, covering the ears. The head is bent forward, and slightly turned to the anatomical right side. The eyebrows and the area below the right eye and the bridge of the nose appear to be swollen. There is a line in the middle of the bridge of the nose that is consistent with a bone/cartilage separation. This does not have the aspect of a fracture. The moustache and beard are visible and colored due to the fluid from the lung edema that came out of the nose and mouth, after the body was lowered from the cross and put in a horizontal position. 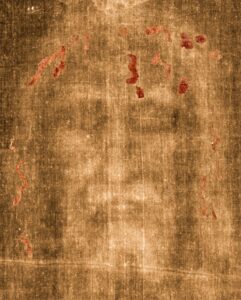 Negative image of the face

The arms show directional blood flows consistent with the position they had during the crucifixion. The hands are crossed just below the umbilicus at the hip level with the left hand over the right one. Both thumbs are missing,, and a wrist wound is visible on the right side, obviously due to a nail wound. There is a raising of the chest consistent with rigor mortis. On the right side of the thorax there is a large area of blood, with on the top a wound in the shape of a Roman spear (called the hasta), in the region of the sixth intercostals place, representing the blood flow from the spear wound.
This continues to the middle-back side, and shows the blood flow that went to the back after the body was put in a horizontal position.

Negative image of the body

The back, buttocks, legs, chest and abdomen, show evidence of scourge marks, many of them depicted as dumb-bell shaped images, caused by the Roman Flagrum Taxulatum. The shape of the buttocks is round and not flat, and this is also an indication of rigor mortis. The right shoulder is lower than the left and might be a sign of a luxation of the shoulder. Images in the region of the left scapula and right shoulder area suggest abrasions, caused by the carrying of the vertical beam of the cross, the patibulum. There is also a slight bulging of the abdomen. The buttocks are a-symmetrical, with the right lower than the left. The legs are close together. There is a large abrasion and contusion on the left knee region. The calves show a natural roundness. The bare feet reveal the right sole and part of the left foot in the back image, covered with dirt, and also blood coming from the nail wound. The left foot is crossed over the right foot. The left leg id bended more than the right leg.