In September of 2005 the first hologram of the face was produced based on a photograph of the face made by Barrie Schwortz during the STURP-team investigations of 1978, where Barrie was the technical photographer. I contacted him and that led to a visit in November of 2005 to Los Angeles where Barrie was living at that moment. Barrie is a professional photographer and film-producer and the creator of the website www.shroud.com, which is the most informative website of the Shroud of Turin.

First hologram of the face

After studying the hologram of the face he had some criticism about the image and gave his professional opinion about the procedure that we had followed and also gave us good advices that led later on to new conversions of the Giuseppe Enrie photographic material (1931) and solved also how to find information in image-less areas that we had encountered. This brought the quality of the holograms that were created later to a much higher level of precision and detail. I am very grateful to Barrie Schwortz for taking the time and giving his professional advice.

Following is the content of an E-mail that he sent me in May of 2006 where he describes how to find information in parts of the imageless areas on the sides of the face. One year later we also solved parts of other image-less areas around the hands and lower parts of both arms and also on the anatomical right side of the face and the forehead when Prof. Avinoam Danin from the Hebrew University in Jerusalem discovered flower images on these before-mentioned places, and where these flowers and plants seemingly had blocked the formation of the body-image there.

I quote from Barrie’s mail:
“This response below was originally written and posted to the private Yahoo Shroud Science Group (SSG)”:
(See photograph 5)

“ In response to a number of requests and the ongoing discussion about the supposed “lack of image” on the sides of the Shroud facial image, I have done a simple density correction to demonstrate that facial image is indeed visible in the darker areas on the sides of the face. To simplify matters, I only did the correction on one side. The first image (left) shows the face without any correction. The second image (center) shows the outline of the area I selected for correction. I basically followed the vertical lines at the left and right margins of the dark band in the weave which extended the correction beyond the cheek and into the hair at right. The third image (right) shows the facial image with the selected area density corrected. Note that more of the cheek and jaw-line is visible and you can still see a separation between the cheek and the hair. I used the magnetic lasso tool in Photo Shop to select the area. With the magnetic lasso tool, the border snaps to the edges of defined areas in the image. The magnetic lasso tool is especially useful for quickly selecting objects with complex edges set against high-contrast backgrounds. I then applied a +20 point brightness (RGB luminance) correction to the selected area, using the surrounding densities as a visual reference to make the adjustment. No other processing was done”. 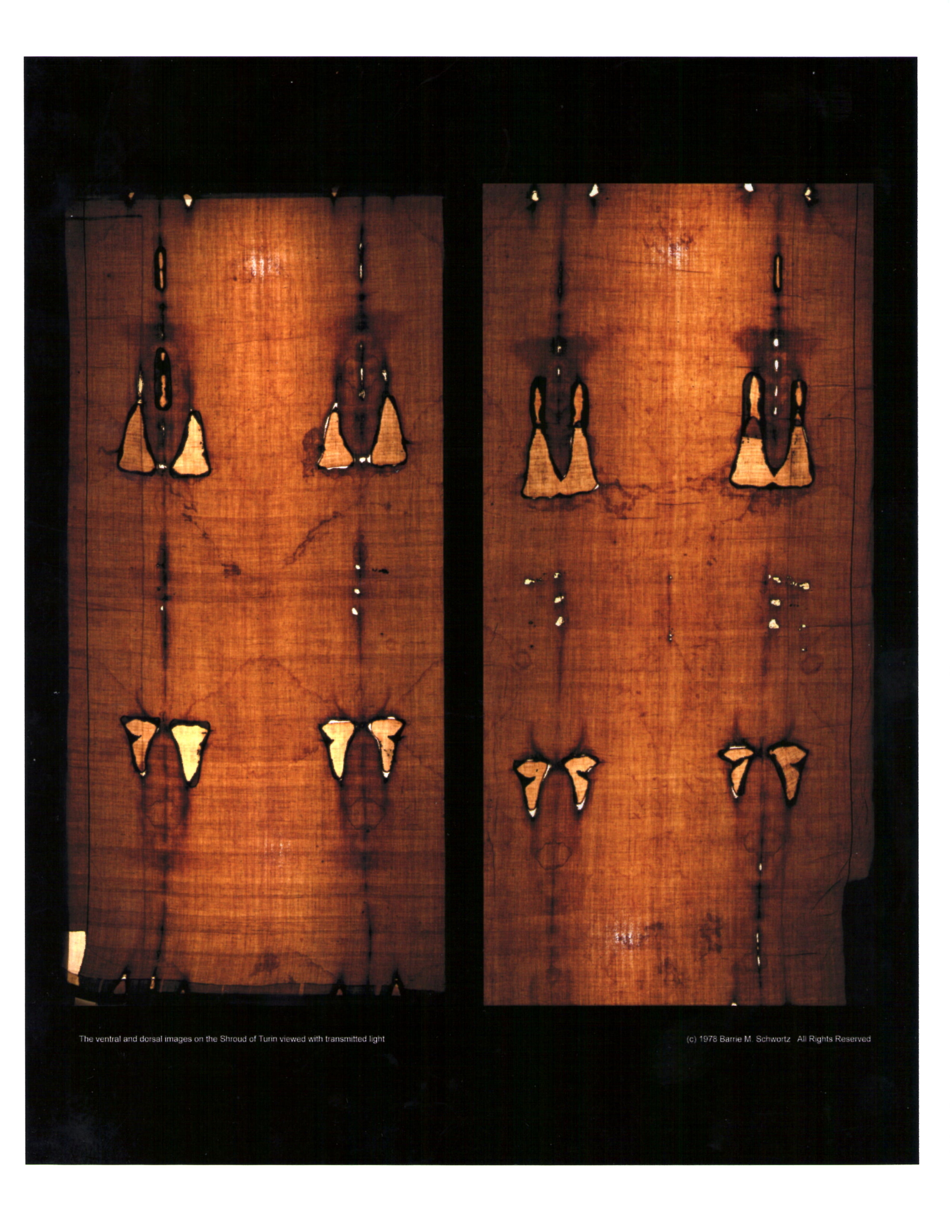 This information demonstrates that the natural banding in the linen from the various batches of ancient linen that were woven together to make the Shroud cloth, took up the image in varying intensities. In other words, the darker bands of linen made the Shroud image darker in these areas. This is particularly noticeable along both sides of the face, although these bands run through the entire length of the Shroud and are very visible in my transmitted light photographs. (see photograph 4a). There appears to be a direct correlation between the linen banding and image density. Included below is an additional comparison showing this cloth banding relative to image density.
See attached photograph 6. Here is the text that accompanied this photo:

This set of images provides an interesting comparison of the image density versus the cloth density with transmitted light. First, in case there is any doubt that there is banding in the Shroud weave, the transmitted light photographs clearly show this banding running throughout the entire length of the cloth. These are not just “speculation”. Once again, I used the same pixel selection tool in Photo Shop to select the area to the right of the face, but this time based on transmitted light density.
There appears to be a similarity between the lighter band to the right of the face in the transmitted light photographs, and the darker band to the right of the face in the black and white negative image. The selected areas are quite similar in shape. Of course, this is just a preliminary observation and would need to be tested with more precision before any definitive conclusions could be drawn. However, I believe it is safe to say that there appears to be a correlation between the cloth density and the image density in the banded area to the right of the face.
As you can see, the “magnetic lasso” is simply a Photo Shop tool that makes it easier to select certain areas of a photographic image. All I did was lighten the selected area to match it to the surrounding image densities. The resulting image clearly shows a fuller more accurate face”. End quote Barrie.

7. Face with and without correction

The following photograph 7, shows the difference once we applied the technique that Barrie indicated in the Dutch Holographic Laboratory in Eindhoven in the Netherlands. On the left is a photograph of material we used to produce the first Master hologram (see also photograph 11) and it is clear, that there are very dark imageless areas in the banding. The photos 2 and 4 show the face with the corrections. Also, another method was used in the Holographic Laboratory by Walter Spierings, the Director, in the conversion of 2D to 3D and that resulted also in much more detail. Photo 3 is the gray-scale information of the photos 2 and 4. The face is now much more “natural” and detailed. 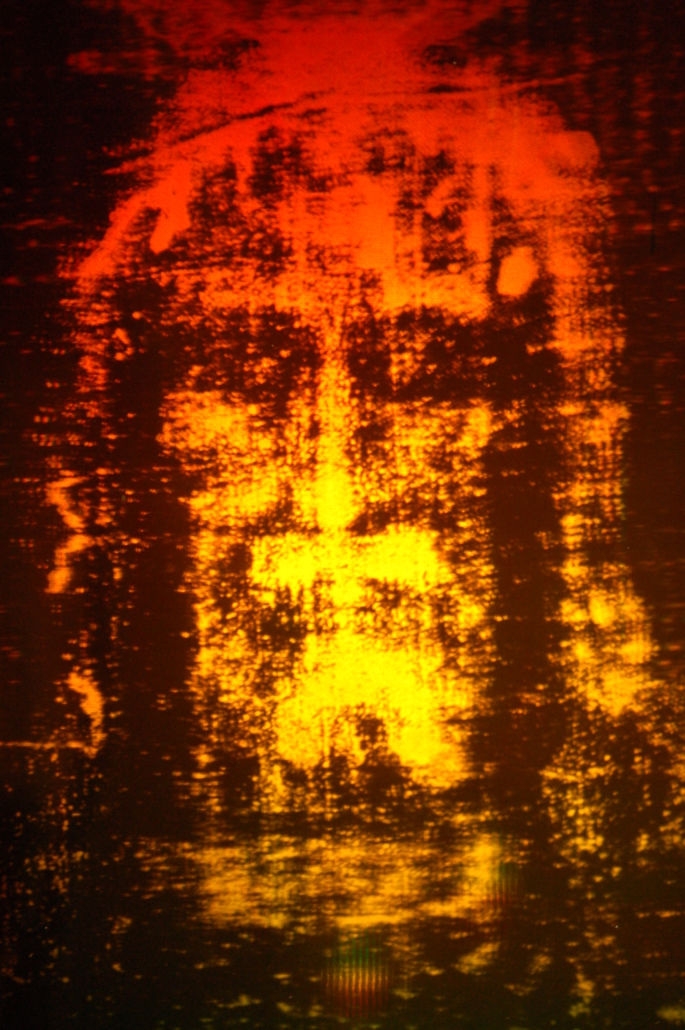