NEGATIVITY OF THE IMAGE : EXPLANATION

REMEMBER WHEN ISABEL PICZEK TALKS ABOUT THE FORMATION OF THE IMAGE IN THE PREVIOUS CHAPTER “THE EVENT HORIZON“ SHE SAYS:
“The mechanism is extremely complex. The orthogonal projection is scarce. The oblique forms are transported in multi-planes turning and turning, superposed and creating a Bas-Relief effect with the mysterious Event Horizon as its impenetrable background. Another paradoxical quality of the Shroud is its semi-three-dimensional character, a two-dimensional encoded image that can only translate itself in three dimensions, forever speaking about the presence of a real three-dimensional Body”.
When I tried to find in the Literature the topic of the Negativity of the Image, the only reference I stumbled upon was in the book “HANDS OF LIGHT” written by Barbara Brennan (famous Spiritual healer and clairvoyant), Bantam Books, ISBN: 0-553-05302-7, pages 52-53.
Talking about the different AURA bodies on page 52, Brennan explains the 5th body which she calls,
THE ETHERIC TEMPLATE BODY:
“I call the fifth layer of the aura the etheric template, because it contains all the forms that exist on the physical plane in a BLUEPRINT or TEMPLATE form. That is, it looks rather like the NEGATIVE OF A PHOTOGRAPH. (Remember, the Shroud image is in negative !!!).
It is the level at which sound creates matter, (And He spoke into being, GENESIS).
To my clairvoyant sight, these forms appear as clear or transparent lines on a cobalt blue background, much like an architect’s blueprint, only this blueprint exists in another dimension. It is as if a form is made by completely filling in the background space, and the empty space left creates the form “.
An example would be, to compare how a sphere is created in Euclidian geometry, to the way one is created in etheric space, In Euclidian geometry, to create a sphere, one first defines a point. A radius drawn out from that point in all three dimensions will create the surface of a spere.
However, in etheric space which one might call ETHERIC SPACE, to form a sphere the opposite process takes place. An infinite number of planes comes from all directions and fill in all space, except for a spherical area of space left empty. This defines the spere. It is the area not filled in by all the planes that meet each other that then defines an empty spherical space “.

Thus, the etheric template level of the aura creates an empty or negative space in which the first or etheric level can exist, filling in the void or negative space with its structure. So, this 5th body contains all the shapes and forms that exist on the physical plane and like mentioned, they exist in negative space, creating an empty space in which the etheric grid structure grows and upon which all physical manifestation exists. It contains the entire structure of the field, including body organs and body form (limbs etc.), ALL IN NEGATIVE FORM.
So, this sounds a lot like what Isabel Piczek is telling when she says that the formation of the image is complex, and the oblique forms are transported in multi planes turning and turning, superposed and creating a Bas-Relief effect with the mysterious Event Horizon as its impenetrable background (as if the Body is the spere in this case). And when she talks about the other paradoxical quality of the Shroud, its semi-three-dimensional character, a two-dimensional encoded image that can only translate itself in three dimensions, forever speaking about the presence of a real tree-dimensional Body than it looks very similar to the formation of the sphere in etheric space, including the 3D properties.
Studying the ANAGLYPH photographs of the Man on the Shroud, the Face and the Front and the Back of the Body, it occurred to me that the 3D had to be like a mold. When we did the 3D studies and converting the grayscale, including the 3D information from 2D to 3D we made it look like a real body in positive. But most probably the 3D info was pointing inward like a mold, or like the inside of a sarcophagus lid, so a negative reversed impression.
When you cut out a piece of rock, than the place where you have cut it out is like a negative of the rock that you have cut out, so again a reversed negative impression.
If you would make a death mask of a person in gypsum, you take the mask off, and then you will have a mold of the anatomical face on the inside of the gypsum.
To demonstrate this effect, I have added three ANAGLYH photographs. If you want to see the positive 3D of the face or the body, you take your 3D glasses, red glass on the left and the cyan one on the right.
Now you reverse the glasses, so the red one on the right and the blue one on the left. The effect is amazing because now you will see the face and the body reversed and like a mold of the face and body, like the inside of the gypsum mold that we mentioned before.
So, in my opinion, that could be the real negative 3D information that was encoded in the Shroud, so, like a mold, because that is the natural way that the linen covered the face and the Body and has been “imprinted” on the inside of the linen in negative. 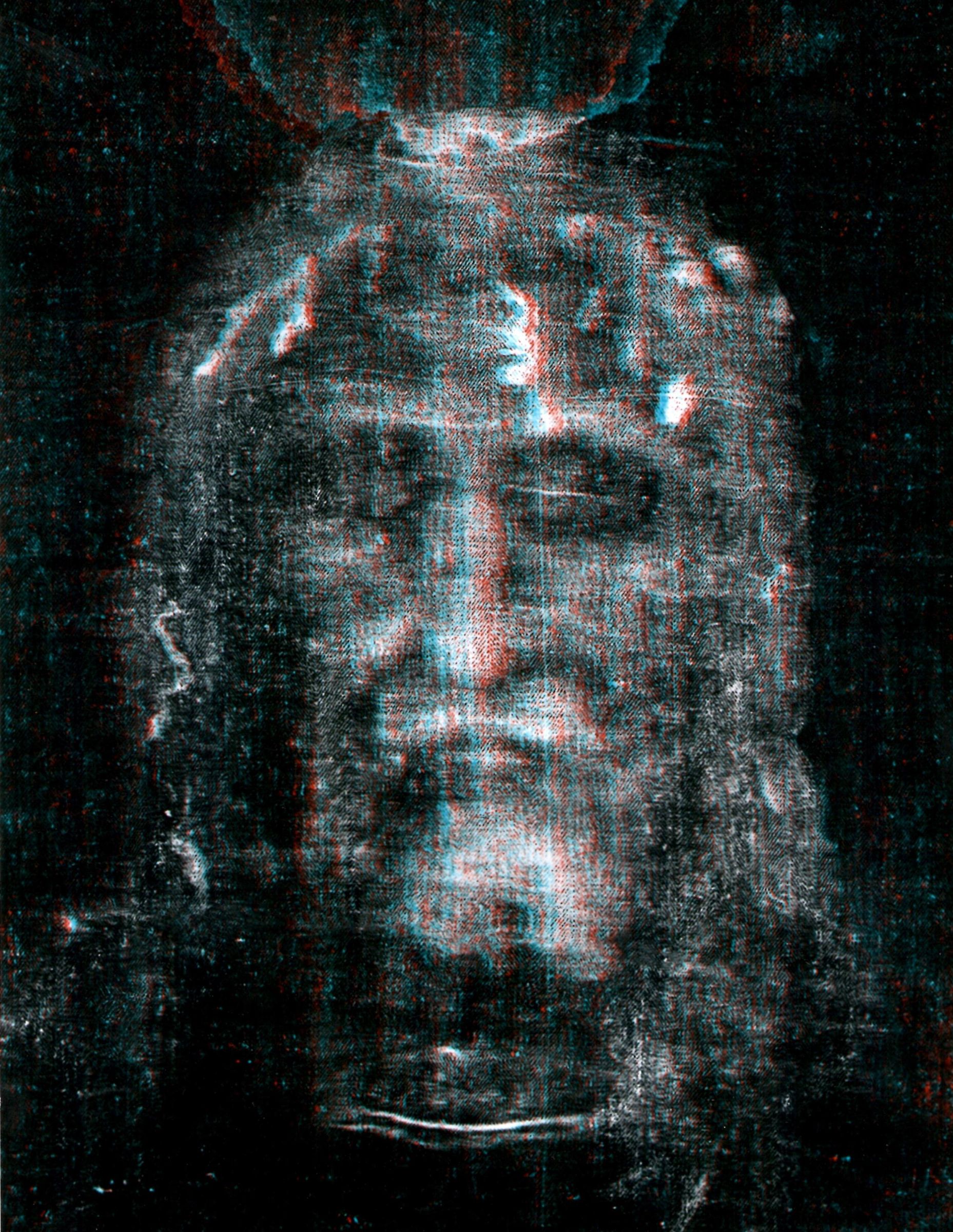