Since 2009, Pete Schumacher and Dr. Petrus Soons did research with the VP-8 Image Analyzer, so it is important to understand how this Analyzer functions, what it was made for and what can you do with it. Following is an explanation written by Pete Schumacher, who was the Product Engineer of the VP-8, designing the circuit boards. 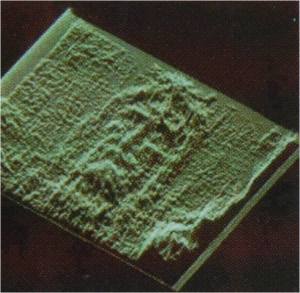 The “VP-8” does in fact have the capacity to divide all, or any portion of the brightness dynamic range of an input image into eight individually variable “slices” of brightness range. So, if we had an image with a possible dynamic range of say 600 individual levels of brightness, we could set slice 1 to cover a range from say zero to 300 and assign that range of values the color red. Then we could set the next “slice” to cover the range from say 300 to 307, giving it the color orange, and so on. When we get to level eight “slice”, we could assign it to be any value of brightness above the highest value set in “slice” 7. We could assign that value the color violet, for example. Each slide range has a particular color assigned to it in the wiring of the unit. Each slice range is also able to be displayed as a shade of gray on a monochrome (black and white) monitor. The brightness of the color and the shade of gray assigned for display of a selected input image brightness range is variable, so that the distinction of each assigned “slice range” can be emphasized, or even turned to zero (black) intensity. This allows each slice range to be displayed together with other slice ranges to enhance combining of slice ranges, or to enhance separation of brightness slice ranges. The brightness range slices can be overlaid onto the RGB (color monitor) video image of the input picture and they can be overlaid in gray shades atop the input picture on a monochrome monitor. The best image to use for mapping brightness variations of an image is one which has captured the full dynamic brightness variations of the object being imaged. In this case, the dynamic range of brightness of for example Barrie’s fascimil image of the Shroud is best. None of the “brights” in the image are “saturated” and neither are any of the dimmest portions “saturated-black”. The real Shroud image is very faint (lacking in contrast) The dynamic curve of the process used in his image can be reconstructed with the appropriate gamma setting (exponent of internal amplification) of the video camera to produce a linear, non-saturated (non-clipped) dynamic brightness reproduction of the original—–which is the Shroud image.. With many other Shroud images, contrast was not (to my knowledge) preserved as a faithful reproduction of the actual Shroud image brightness dynamic. Most (if not all) were contrast pushed to enhance viewing of the image with the naked eye, or perhaps to improve image processing capture, some even employing auto-shutter, automatic ranging (auto-black level and auto-gain), or histogram stretching for all-bit digitization. 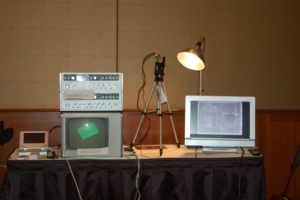 Most other images used films and process that failed to preserve the brightness dynamic of the original image. If, therefore, you map the brightness of an image, which has inadvertently, or purposefully been modified from the original brightness dynamic of the Shroud, in such a way that the original dynamic cannot be recovered, then the brightness map (isometric display of image brightness) will be distorted. Also note, a monochrome or color photographic image produces brightness variations in the monochrome video camera being used to input the photograph into the VP-8 system (as does a scanner, digitizer etc.). The input camera device must also be of a type, and calibration, to produce a faithful (hi-fidelity) reproduction of the photograph’s brightness data into the VP-8. Then the VP-8 must be properly calibrated to produce an accurate isometric projection onto a properly calibrated XYZ (vector, or Cathode Ray Tube -CRT) display monitor. Non of this is trivial. It is all critical to the process of making an accurate brightness map of any image.
There are many factors involved in the analysis of an image. From the lighting in the area and the illumination of the object, to the internal settings of the processing and display equipment. It is important for anyone studying the Shroud to consider all the factors before making an assessment, and even then it is doubtful that an absolute conclusion can be determined without additional interpretation and expert analysis—–including spectral isolation of image components, comparison with other images and analyzers, and “ground truth” physical examination of the origin object itself.

Photos 3 and 4 show the head and the body of the Shroud image as result of the imaging in the VP-8 Image Analyzer.

The DVD seam 3D rotation is a movie (DEMO) that shows the functioning of the VP-8. The movie starts after 1 minute and 14 seconds and shows the head, and in the end of the movie the arms and hands.

The next DVD shows first an image of the head so you can appreciate the 3D. After that you see the photograph of a couple (Pete and his wife Susan) and the FLAT result without 3D, and the noses pushed into the face (in the VP-8).

The next 4 photographs also show this result when you put the photograph of a person in front of the video camera of the VP-8 and the result is very striking compared with the face of Jesus on the Shroud. You can see that the faces of the two persons are flattened and distorted, unlike the image of the face on the Shroud, where you have an anatomical correct 3D.

This chapter and the next 7 chapters are the result of the cooperation of Dr. Petrus Soons and Pete Schumacher doing research on different aspects of the Shroud image with the help of the VP-8 Image Analyzer.

6.3) Discovery of an OVAL SOLID OBJECT under the beard of the Man on the Shroud.
6.4) The discovery of 3 HEBREW LETTERS on the solid oval object under the beard.
6.5) The discovery of a HALO around the head of the Man on the Shroud.
6.6) Research of the NAIL wounds.
6.7) Signs of the presence of a PHYLACTERIE on the left arm.
6.8) Investigation of the LANCE wound.
6.9) Research of the possible presence of LEPTONS on the eyelids.
6.10)—6.11) Research Avinoam Danin & Dr. P. Soons

In 2009 during the Shroud Conference in Columbus, Ohio, Dr. Petrus Soons for the first time gave a presentation to the Scientific Shroud Community of the 3D work that he had done with his team in the Netherlands, that resulted in the 3D Holograms of the Face and the Body of the image of the Man on the Shroud and some new discoveries he had done studying these 3D materials. Pete Schumacher was also present and being very familiar with the 3D properties of the Shroud image, because of his work with the Vp-8 Image Analyzer, was very impressed with the results of this work. Out of this meeting developed a friendship, and also a cooperation that resulted in doing research on certain aspects of the Shroud image. Dr. Soons traveled regularly to Alamogordo, New Mexico, where Pete was living with his wife Susan, and where he also had the Shroud Exhibit and Museum, which was an ideal place to do the research. In this Museum was also exhibited a life-size replica (fascimil) of the Shroud, produced by Barrie Schwortz, and very close to the original of the Shroud and this was used to do part of the research.

We will go chapter by chapter, but first I will show some photographs that will give a very good idea of how the setup for the research was with the Vp-8 Image Analyzer, so maybe it is good to repeat in a short way the functioning of this VP-8.

The VP-8 is an analog video processing device (developed in 1972 by PETE SCHUMACHER), which processes monochromatic images (2-dimensional images) and converts the various luminance levels of it into a hypothetical height, corresponding to those luminance levels, thus forming a vertical relief. The VP-8 System uses a video camera with a lens to capture a video image of the object, or photograph to be analyzed and then making measurements and special displays to aid in the analysis. The brightness of the XY monitor is also controlled by the VP-8, thus creating an “XYZ-Display” (vertical relief). The VP-8 was used for various applications. The 1977 brochure lists “radar-imagery, X-ray photography and infrared thermography, laser profile analysis, earth resource satellite image analysis “.

The primary interest to the Shroud of Turin research was the isometric projection display which maps brightness variations within video images.

The Vp-8 Image analysis in 1976 in Colorado Springs (Captains Jackson and Jumper) revealed that a photograph of the Shroud image, unlike any photograph, also of a drawing or painting, was “spatially encoded” i.e., it possessed depth information. John Jackson and Eric Jumper noticed an exact mathematical relationship between the body—cloth distance. The image on the Shroud varied inversely with the cloth-to-body distance, meaning that the dark parts in the image on the linen were closest to the body surface and the white parts on the linen furthest away from the body.

Following is an article about the discovery and study of the solid oval object under the beard of the Man on the Shroud (6.3.1)