This chapter and the next 7 chapters are the result of the cooperation of Dr. Petrus Soons and Pete Schumacher doing research on different aspects of the Shroud image with the help of the VP-8 Image Analyzer.

6.3) Discovery of an OVAL SOLID OBJECT under the beard of the Man on the Shroud.
6.4) The discovery of 3 HEBREW LETTERS on the solid oval object under the beard.
6.5) The discovery of a HALO around the head of the Man on the Shroud.
6.6) Research of the NAIL wounds.
6.7) Signs of the presence of a PHYLACTERIE on the left arm.
6.8) Investigation of the LANCE wound.
6.9) Research of the possible presence of LEPTONS on the eyelids.
6.10)—6.11) Research Avinoam Danin & Dr. P. Soons

In 2009 during the Shroud Conference in Columbus, Ohio, Dr. Petrus Soons for the first time gave a presentation to the Scientific Shroud Community of the 3D work that he had done with his team in the Netherlands, that resulted in the 3D Holograms of the Face and the Body of the image of the Man on the Shroud and some new discoveries he had done studying these 3D materials. Pete Schumacher was also present and being very familiar with the 3D properties of the Shroud image, because of his work with the Vp-8 Image Analyzer, was very impressed with the results of this work. Out of this meeting developed a friendship, and also a cooperation that resulted in doing research on certain aspects of the Shroud image. Dr. Soons traveled regularly to Alamogordo, New Mexico, where Pete was living with his wife Susan, and where he also had the Shroud Exhibit and Museum, which was an ideal place to do the research. In this Museum was also exhibited a life-size replica (fascimil) of the Shroud, produced by Barrie Schwortz, and very close to the original of the Shroud and this was used to do part of the research. 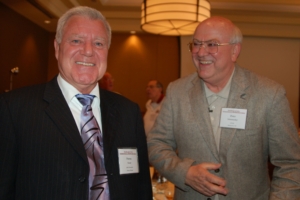 We will go chapter by chapter, but first I will show some photographs that will give a very good idea of how the setup for the research was with the Vp-8 Image Analyzer, so maybe it is good to repeat in a short way the functioning of this VP-8.

The VP-8 is an analog video processing device (developed in 1972 by PETE SCHUMACHER), which processes monochromatic images (2-dimensional images) and converts the various luminance levels of it into a hypothetical height, corresponding to those luminance levels, thus forming a vertical relief. The VP-8 System uses a video camera with a lens to capture a video image of the object, or photograph to be analyzed and then making measurements and special displays to aid in the analysis. The brightness of the XY monitor is also controlled by the VP-8, thus creating an “XYZ-Display” (vertical relief). The VP-8 was used for various applications. The 1977 brochure lists “radar-imagery, X-ray photography and infrared thermography, laser profile analysis, earth resource satellite image analysis “.

The primary interest to the Shroud of Turin research was the isometric projection display which maps brightness variations within video images. 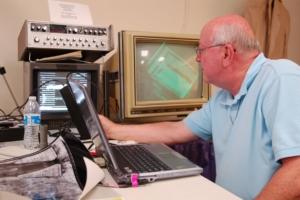 The Vp-8 Image analysis in 1976 in Colorado Springs (Captains Jackson and Jumper) revealed that a photograph of the Shroud image, unlike any photograph, also of a drawing or painting, was “spatially encoded” i.e., it possessed depth information. John Jackson and Eric Jumper noticed an exact mathematical relationship between the body—cloth distance. The image on the Shroud varied inversely with the cloth-to-body distance, meaning that the dark parts in the image on the linen were closest to the body surface and the white parts on the linen furthest away from the body.

Following is an article about the discovery and study of the solid oval object under the beard of the Man on the Shroud (6.3.1)