PHOTOGRAPHS
Photographs were taken in 2000 and 2002 by the team of CARLOS GIAN DURANTE, consisting of Joseph Cavalli, Daniel Demonte, Tiziana Durante with the help of Nello Balossino. The photographs were taken with artificial lights and all kind of filters and lenses in normal, and also digital format.

SCANNING OF THE SHROUD
According to Barrie Schwortz this was also done in 2000 with the HAL-500 and according to the information that I have, this was a partial inspection. This was done by the CENTRO ELECTRONICO NATIONAL GALILEO FERRARI.
The scanning of 2002 was done by the team of the INSTITUTE OF PAUL SOARDO and the team consisted of: Joseph Rorsi, Paola Iacomussi, and Nataia Bo.

PHOTOGRAPHS OF THE RESTAURATION.
These were made by GIULIANO MARCHISCIANO and his helpers and VIDEOS were also made by the team of TELESUBALPINA consisting of Daniel D’Aria and Bittorio Villera.

MEASUREMENTS OF THE SHROUD
New measurements of the Shroud were done by Gian Maria Zaccone with the help of Bruno Barberis and that resulted in new measurements. Length of the Shroud: LEFT 442,5 cm and RIGHT 441,5 cm. The width: TOP 113,7 cm and BOTTOM 113 cm.

SOME TECHNICAL ANALYSIS (???) was also done by Peter Savarino the “Consejero Cientifico” of the Custodian. All the proceedings were noted down during the whole restauration by Sister M. Clara Antonini.

RECORDING OF THE SPECTRA, TAKING OF SAMPLES
On July 2, 2002, the work on recording the spectra and the taking of samples of minute particles from the surface of the REVERSE SIDE of the Shroud cloth began. They proceeded according to the following operative scheme:

1. Identification of the sites to be investigated
2. Recording of the spectra
3. Taking of the samples

The sites to be investigated were identified, on the basis of a proposal by prof. Baima Bollone. This proposal identified 10 sites with precise characteristics that are listed as follows:

These points were measured on a photographic copy and the measurements were transferred onto the reverse side of the Shroud. Once the sites had been identified the RAMAN SPECTRA were recorded. The recording was done by Dr. Ricardo Taglapietra and by engineer Enrico Maria Orsi from the firm RENISHAW. The recordings were carried out directly on the various sites of the Shroud using a RAMAN SPECTROMETER (Renishaw RA 100 Model) with the sensor mounted on fiber optics. The sensor was placed on a mobile support (built by the firm ADL) which enabled it to reach any point on the cloth. Excitation was achieved with light (850nm wavelength) to reduce any possible risk of damage and to limit fluorescence phenomena. It is worth noting that, prior to this work, Raman spectra had been conducted on linen cloths with textile characteristics similar to those of the Shroud, and the feasibility and non-invasive nature of the procedure had been verified.

Once the RAMAN measurements had been completed the UV-VIS REFLECTRANCE SPECTRA were to be recorded. Also, in this case preliminary measurements had previously been conducted on linen cloth. The reflectance measurements were taken by Dr. Sergio Pellegrino and Dr. Manuela Caldironi from the firm LASERPOINT. The spectrophotometer used was an AVANTES (200-800 nm) with fiber-optics equipped with collimator lenses at the ends to collect the light signals directly at the measurement sites. The ADL mobile support was used for these recordings. This meant that the various sites could be reached, and good focus obtained without needing to rest any object on the Shroud.

FLUORESCENCE SPECTRA
Last the Fluorescence Spectra were measured utilizing the same basic instruments as before but with the support of an external light exciting. All the spectra (RAMAN, REFLECTANCE and FLUORESCENCE) were given to His Eminence Cardinal POLETTO.
SAMPLES
Samples were taken of the minute dust particles present on the same Shroud sites where the spectroscopic measurements had been obtained. Prof. Baima Bollone took the samples using the ADHESIVE TAPE METHOD in the presence of the Chancellor of the Bishop’s See of Turin, Mons. Giacomo Martinacci. Samples were also obtained using the ASPIRATION METHOD in these sites. All the samples were given to the Papal Custodian, Cardinal POLETTO.

FLUORESCENCE PHOTOGRPAHS
Finally, Dr. Maurizio Celia and inspectors Diego Ambrogio and Carlo Marchese from the Turin Scientific Police Force took a series of Fluorescence photographs on July 11, using visible and UV lighting techniques. The lighting was always indirect and limited to the time required to take the photographs. The results were given to the Papal Custodian, Cardinal POLETTO. During the morning of July 10, 2002, the scanning operation of the REVERSE side of the Shroud was completed.

ranged between factors 80, 110, 170, 230, 350, 390, 400 and 450. The most important details were documented in the table; it was drawn up on the spot by the recorder during work. The special microscope used was an “OPTICAN I HDS FORT, which could be moved by means of a so-called “ADL-bridge” to which it was attached with fiber optic cables connected to a monitor and a printer and the possibility to make digital shots also. The monitor was an EVER FOCUS and the printer a MITSUBISHI COLOR CP 710. The shots were recorded by a PANASONIC NV-DV 2000 Network Station Digital Videocassette Recorder, using tapes SONY mini DVM30 (cf. protocol 15a session: June 30, 2002).

After the removal of the Holland cloth of 1534 and during the conservation work of the summer of 2002, the Shroud became visible for the first time in its entirety also on the reverse side. This is an important and unexpected step forward, which may lead to the clarification of numerous questions which have remained unsolved until now. At the same time, however, the already complex issue of understanding Shroud references will become even more complicated, as we now have not only the familiar “front” but also the reverse side of the cloth. The entire surface area of reference is about 10 square meters, if in the future reference is made to any precise point on the cloth it is necessary to distinguish between:

Observation of the Shroud is rendered even more problematic by the fact, that the frontal and dorsal human image on it do not seem to be like an object, but from the view of a sort of orthogonal projection of the body image. Finally, a further difficulty is that the Shroud is frequently shown in the photographic inversion, which is certainly very impressive, but it again adds confusion to the frame of reference. To reduce possible errors to a minimum, the folded illustration (scale 1:5) of the front and the reverse sides of the Shroud has been reproduced showing both sides on one page. With the superimposition of the grid prepared by GINO MORETTO, it will be relatively easy to identify every point of the front and the reverse of the Shroud, at least in the photographic positive in the future.

To facilitate understanding of the front and the back of the Shroud, a grid of coordinates was created by GINO MORETTO, which provides a concrete frame of reference for discussion among researchers as a means for identifying the various points of the Shroud surface and for the purposes of facilitating communication.

The most obvious damage to the Shroud has been caused by the disastrous fire of Chambery in 1532. The fabric had been charred in places so that holes were left which necessitated an extensive intervention.
Two years after the fire, in 1534, the serious damage had been made as inconspicuous as possible by the St. Clare nuns, who covered with patches the big ugly holes left by the fire and attached a supporting Holland linen cloth to the backside of the Shroud.

In 2002, Mechthild Flury-Lemberg and her assistant Irene Tomesi, unpicked the Holland cloth and the patches, removed the dirt that had accumulated above all between the patches and the lining, and collected all the fragile material. During this work scanned images were taken of the front and reverse sides of the Shroud cloth and other photographic surveys were carried out. All the collected materials were given to the Custodian of the Shroud. Mgr. Severino Poletto.
The burn-holes were covered and on the backside of the Shroud a new supporting linen cloth was attached. 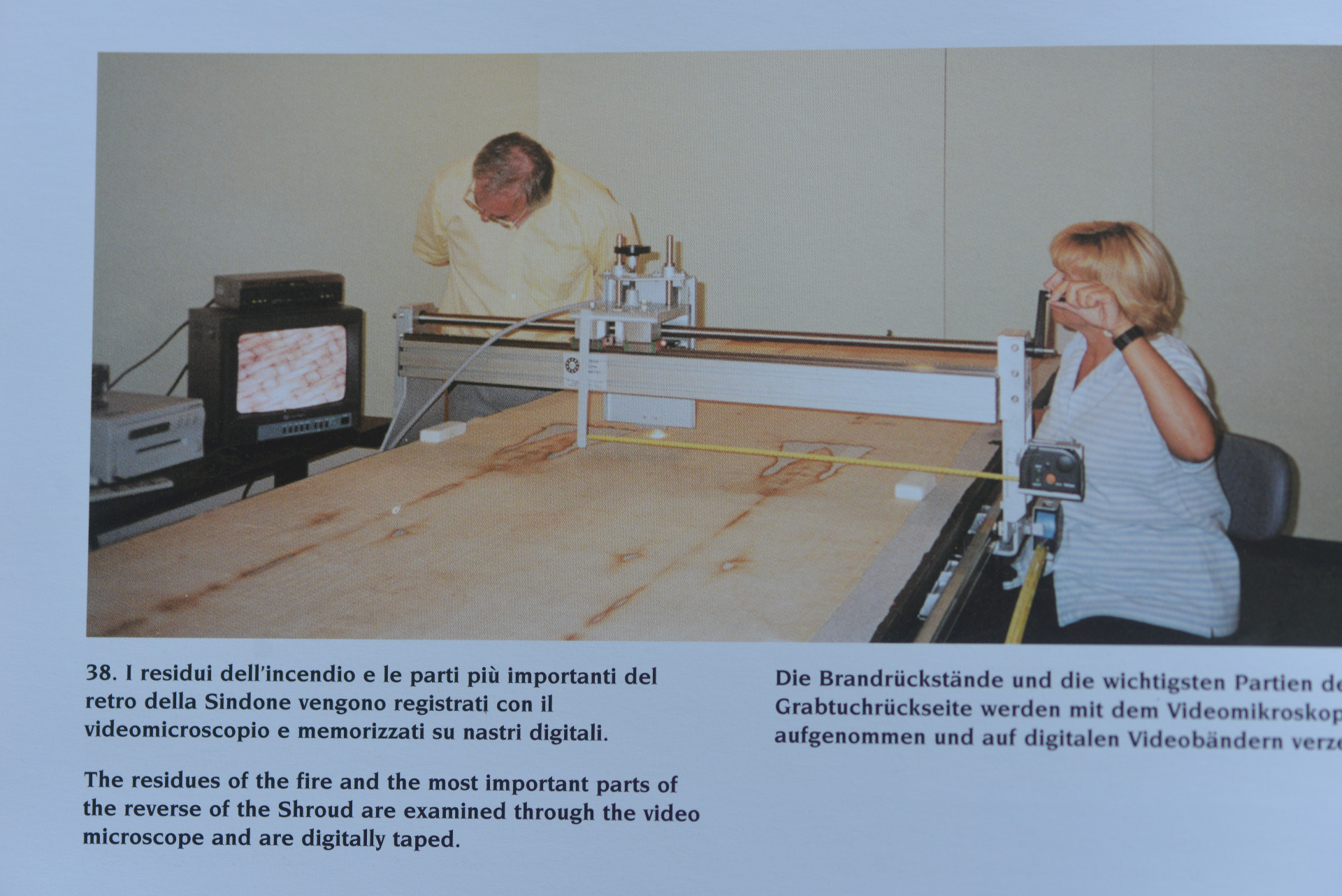 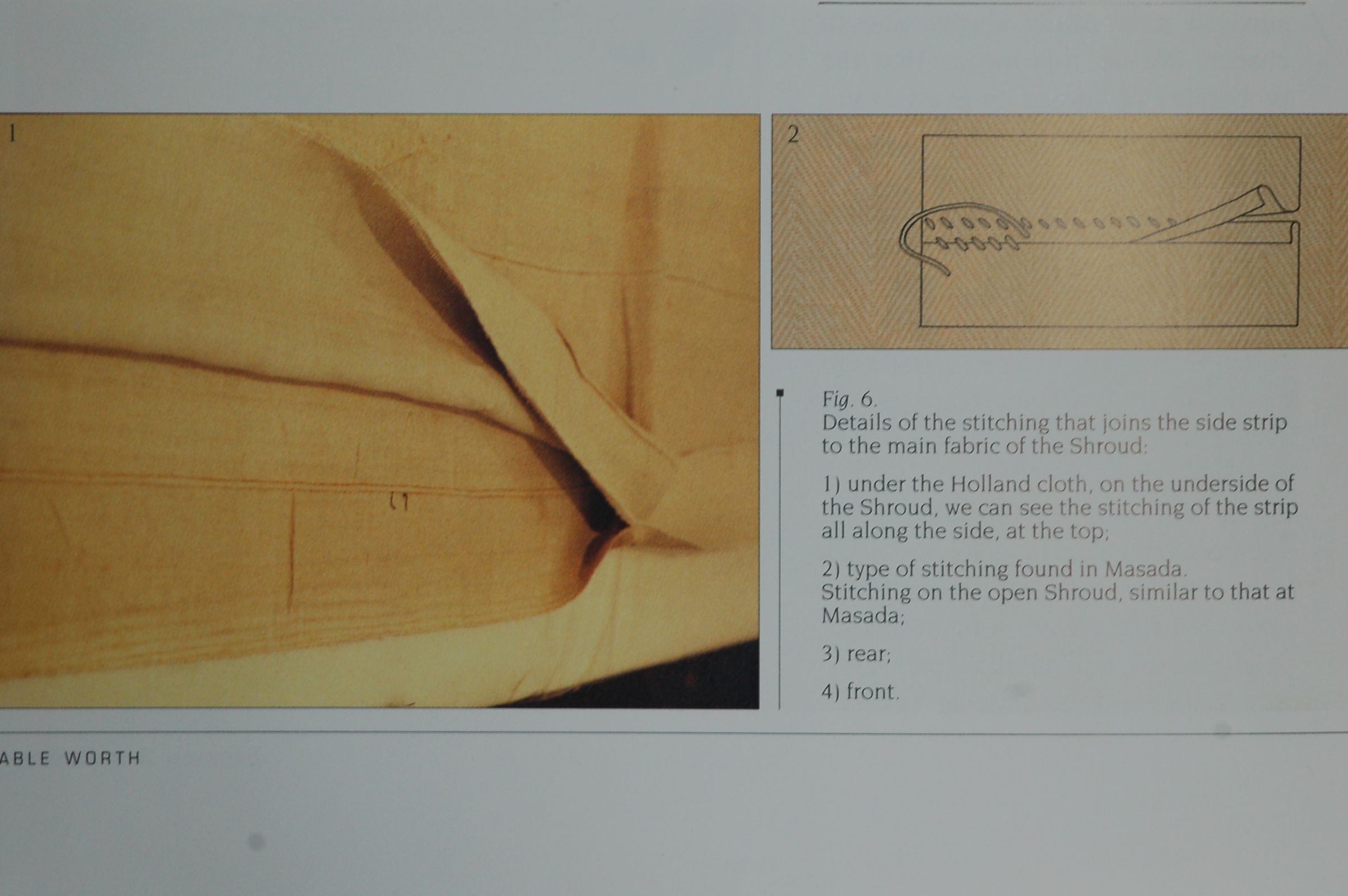