Since we met Isabel Piczek the first time in the USA in 2006, we became good friends and visited her regularly in Los Angeles in her atelier and had long discussions, with of course as main theme the Shroud of Turin. She showed us part of her work in different churches and chapels, large paintings, beautiful stained-glass artwork and her mosaics. She was a brilliant woman, and I had a great respect and admiration for her. Her death came as a shock to me and my wife Dalys and I will always remember her sharp mind and artistic qualities and her very warm personality.

Following is a short overview of her life.

In Memory of Isabel Helen PICZEK:

Isabel Helen Piczek, a world-renowned ecclesiastical and sacred artist, passed away peacefully in her home in Echo Park, California on September 29, 2016 at the age of 88. She was born in Hatvan, Hungary on November 14, 1927 to Zoltan and Elona Piczek. Her father Zoltan was a noted artist and art professor. Isabel graduated from the Academy of Fine Arts in Budapest and in addition to being a world class artist also became an internationally known Physicist, recognized for her study of “Time”, and also the Shroud of Turin. Isabel shared her formative years as an artist with her sister Edith who also nurtured and developed her own artistic style. Their partnership blossomed and matured through the years. Edith was a frequent collaborator and Isabel’s lifetime companion until her death in 2012.
Isabel was still a young student when she began to visualize the possibilities of a new sacred art form–a new liturgical vision. She realized early on that there would be no opportunity to create that vision in Hungary as it was then part of the suppressed world behind the Iron Curtain under Communist rule. Just after the end of World War 11, Isabel and her sister fled the Communist regime in Hungary and escaped across the border into Austria. It was a difficult and often dangerous journey, but they soon found their way to freedom. After a brief stay in Vienna they literally “painted” their way across Europe, travelling from one monastery to another, enduring struggles and challenges along the journey. At one point they wandered in the snow of the Alps for three days until finally finding their way across the Italian border.They continued on to Rome which would become their home for the next three years.

In Rome, Isabel won the International Grand Award for her painting at the Galleria di Roma. As a result, though still only a teenager, she won the competition to paint a new mural. Isabel, already a prodigy, was only 14 years old but was commissioned to paint a 400 sq. ft. true fresco mural at the world famous Pontifical Biblical Institute owned by the Vatican.
When she arrived to receive the award, officials doubted that such a young girl could have created the submitted art that had won the competition. To prove her ability, they demanded that she complete the first third of the mural for free and that a panel of experts would judge her work. The judges were astonished at the quality and maturity and approved the completion of the commission. From that humble start, during their three-year stay at Rome, Isabel and her sister would go on to be hired and to complete 42 additional mural paintings.
Declining a scholarship to move to Paris, Isabel and her sister briefly lived in Canada before making the decision to come to America in 1956. They soon established their Studio, the Construction Art Center, in Echo Park, close to downtown Los Angeles. It is here that Isabel has continued to live and create art over 50 years.
Her body of work is nothing short of astonishing and includes colossal sized murals, mosaics, paintings, stained glass windows and tile works for over 400 buildings, churches and cathedrals in seven countries and on three continents. 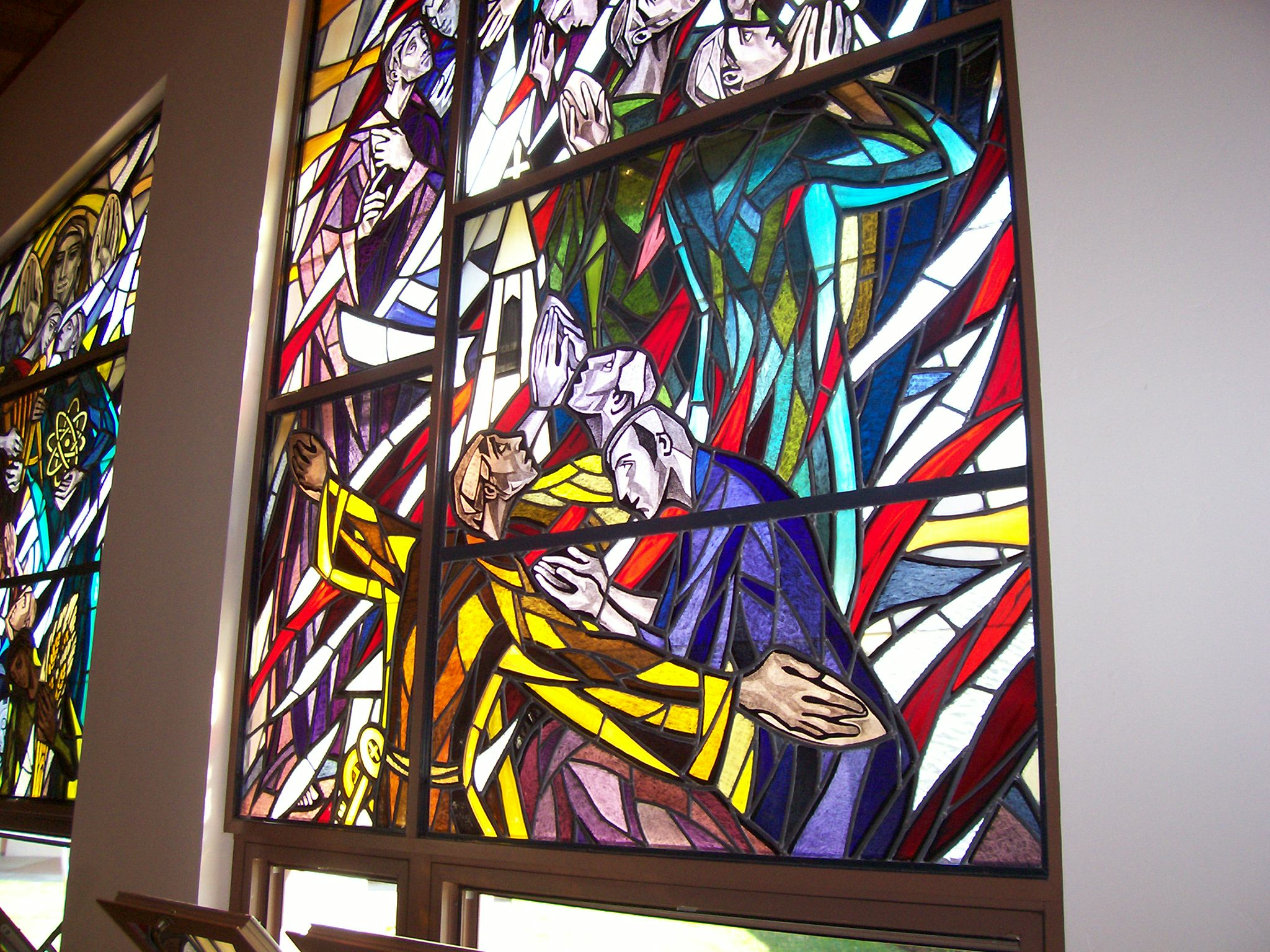 Winning an International Competition, Isabel created the 300 sq. ft. figurative stained glass entrance for the Basilica of the National Shrine of the Immaculate Conception in Washington, D.C. Considering the hundreds of art works she has created, Isabel frequently references the following as among her favorite; The large Resurrection mural at Holy Cross Mausoleum in Culver City; the art works of the Sacred Heart Chapel in Santa Anna; the mosaics of St John Neumann Church in Irvine; St. Anne of the Sunset in San Francisco; San Fernando Mission Mausoleum in Mission Hills; St. Mary Magdalene’s in Camarillo; the mural paintings, mosaic and stained glass at the Guardian Angel cathedral in Las Vegas, Nevada; Holy Family Church in Deming, New Mexico; St. John Fisher in Palos Verdes Peninsula; and the murals, stations and stained glass windows at St. Anthony Church in San Gabriel. In 1992, Isabel along with her sister Edith was honored by Pope John Paul 11 in recognition of her prolific artistic achievements, examples of which can be found in multiple cathedrals, churches and other buildings across the world.
Cardinal Roger Mahony, Archbishop of Los Angeles, conferred on Piczek admission into the Pontifical Order of St. Gregory and the title Dame of St. Gregory, making her one of only 70 Knights and Dames throughout the world who hold this honor.
Isabel’s art and research has touched the lives of millions of people around the world. Her legacy lives on through her extraordinary work.