A) CONFIRMATION OF MANY OF THE PREVIOUS FINDINGS, for example:

B) NEW FINDINGS THAT WERE DONE STUDYING THE HOLOGRAMS:

THE PHOTOGRPAHS MARKED WITH ANAGLYPH, ARE ANAGLYPH PHOTOGRAPHS AND YOU NEED 3D GLASSES
1) THE POSITIONS OF THE FEET AND THE LEGS were never clearly visible in the 2D photographs. The holograms gave a unique opportunity to see this in 3D and to reveal that both legs were bent with the left leg more than the right one and partly covering the right leg, caused by the fact that the left foot was positioned on top of the right foot in a X-way (diagonal) fashion, causing the left leg to be bent more in the knee than the right leg. In the holograms, the toes of both feet are visible. The toes of the left foot sticking out on the side of the right foot. The conclusion was that the Romans put the sole of the right foot against the stipes (vertical beam), crossed the left foot on top of the right foot (diagonal) and fixed both feet with one large nail to the vertical beam of the cross. (See picture 1 and 2) picture 2 is ANAGLYPH.

2) On the 2D photographs a bloodspot appears to be floating above the area of the head. The holograms clarified that this BLOODSPOT was actually ON TOP OF THE HEAD. There are more bloodspots all around the head area, indicating that the crown of thorns was more helmet-like than only circular. (See picture 3). Picture 3 is ANAGLYPH. 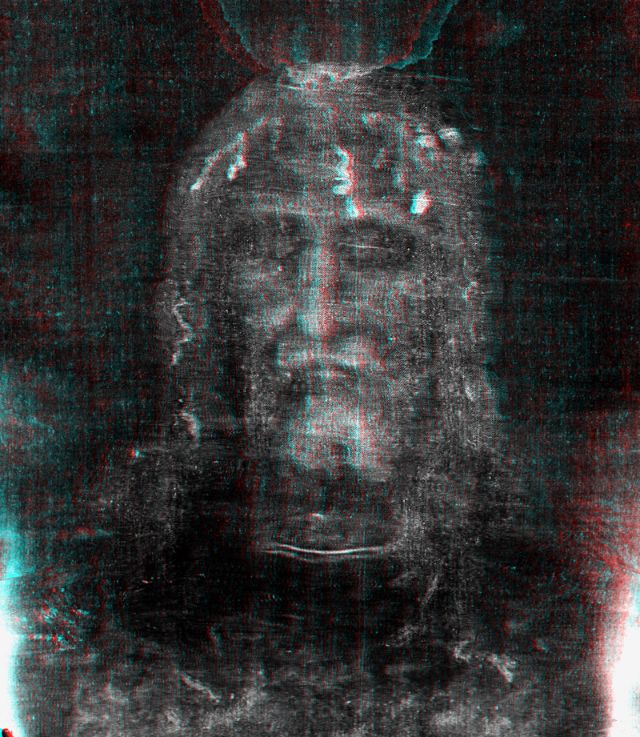 Picture 3. Bloodspot on top of the head

3) WHIP MARKINGS FOLLOW THE CURVATURE OF THE BODY. In the holographic images, the marks caused by the dumb-bell shaped objects on the end of the leather strings (or ropes) of the Flagrum Taxulatum (whip) follow the curves of the sides of the upper and lower legs, as well as the shoulders and buttocks. On the 2D on the upper and lower legs, the shoulders and the abdomen and in the 2D photographs they look straight. This cannot be the result of the work of a painter. (See picture 4). 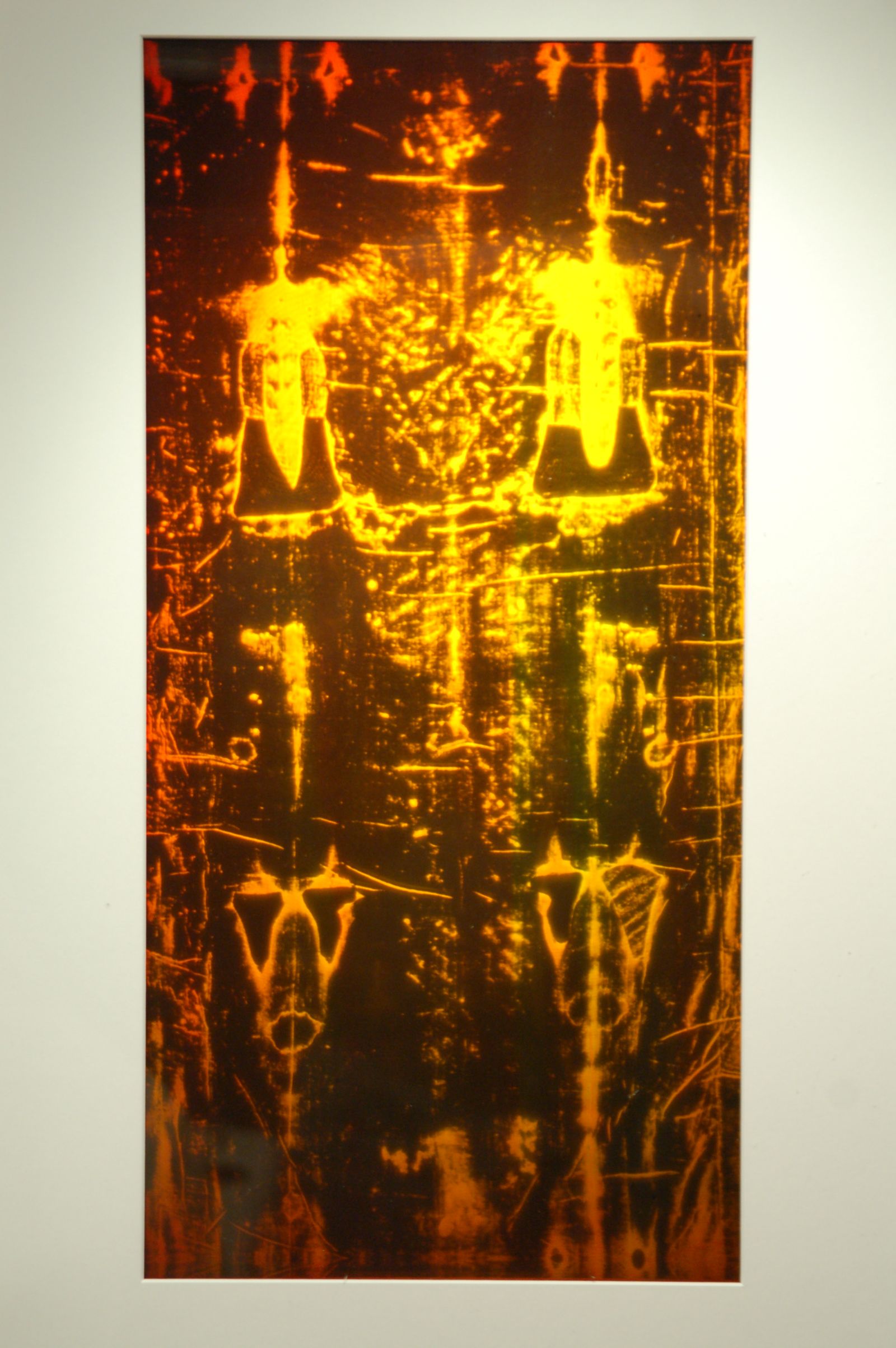 4) In the holograms we can clearly see the presence of TWO SMALL SOLD OBJECTS on top of the eyelids. There were however no more details visible on the surface. These objects are believed to be small coins (leptons) minted between 29 to 34 CE. (See picture 5). Figure 5 is ANAGLYPH. 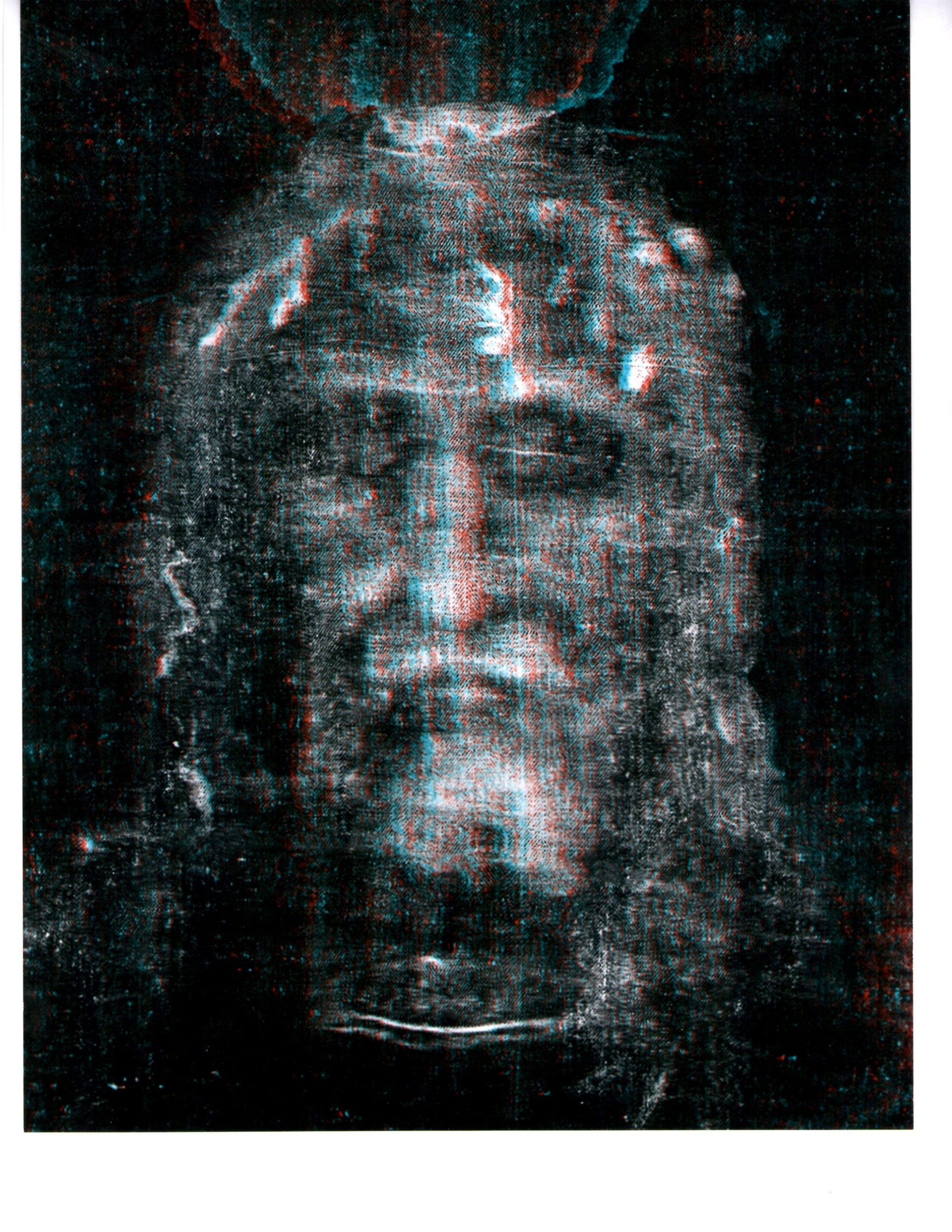 5) In the holograms the POSITION OF THE ARMS is clearly visible. They are not in the position that you would normally expect, on the side of the body. The arms appear to be rigid and oriented in an almost horizontal plane. The elbows are not inclined downwards, they rather seem to lie in this horizontal plane together with the lower arms, The anatomical left lower arm shows the elbow higher than the left hand, which is crossed over the right hand with a natural bending of the fingers . The right wrist is under the left hand on top of the space between the two upper legs. The right hand angles upward following the curvature of the upper left leg. The left hand is bent at the wrist and the fingers are in a downward direction. This position of the arms is a strong indication of rigor mortis, and that this rigor was broken in the shoulders and the elbows. (See picture 6) Picture 6 is ANAGLYPH. 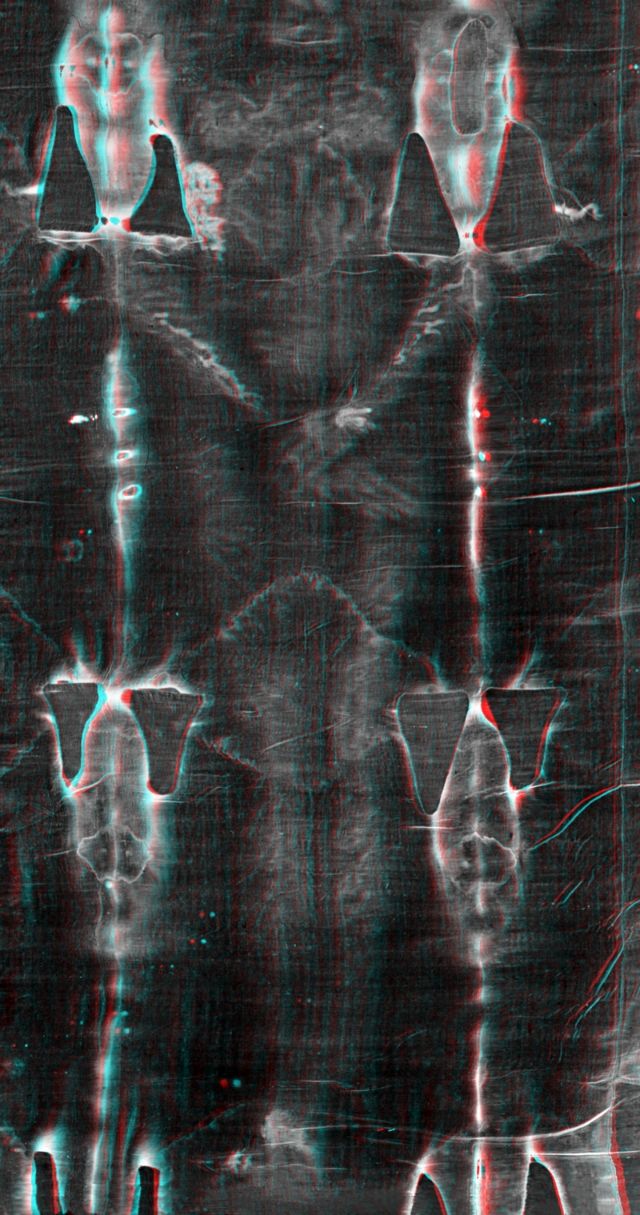 6) RIGOR MOTIS. The position of the arms is a strong indication of rigor mortis, as mentioned. Other signs of rigor mortis that are visible in the holograms are the abnormal raising of the chest area (thorax). The chest appears to be inclined in an upward position with respect to the pelvis area and abnormally expanded. Other signs are the head that is bent slightly forward and turned a little bit to the right anatomical side. The buttocks which are very tense, showing a total contraction of the muscles, although the weight of the body is very pronounced in that area, which would have caused a flattening of the buttocks. (See picture 7). ANAGLYPH. 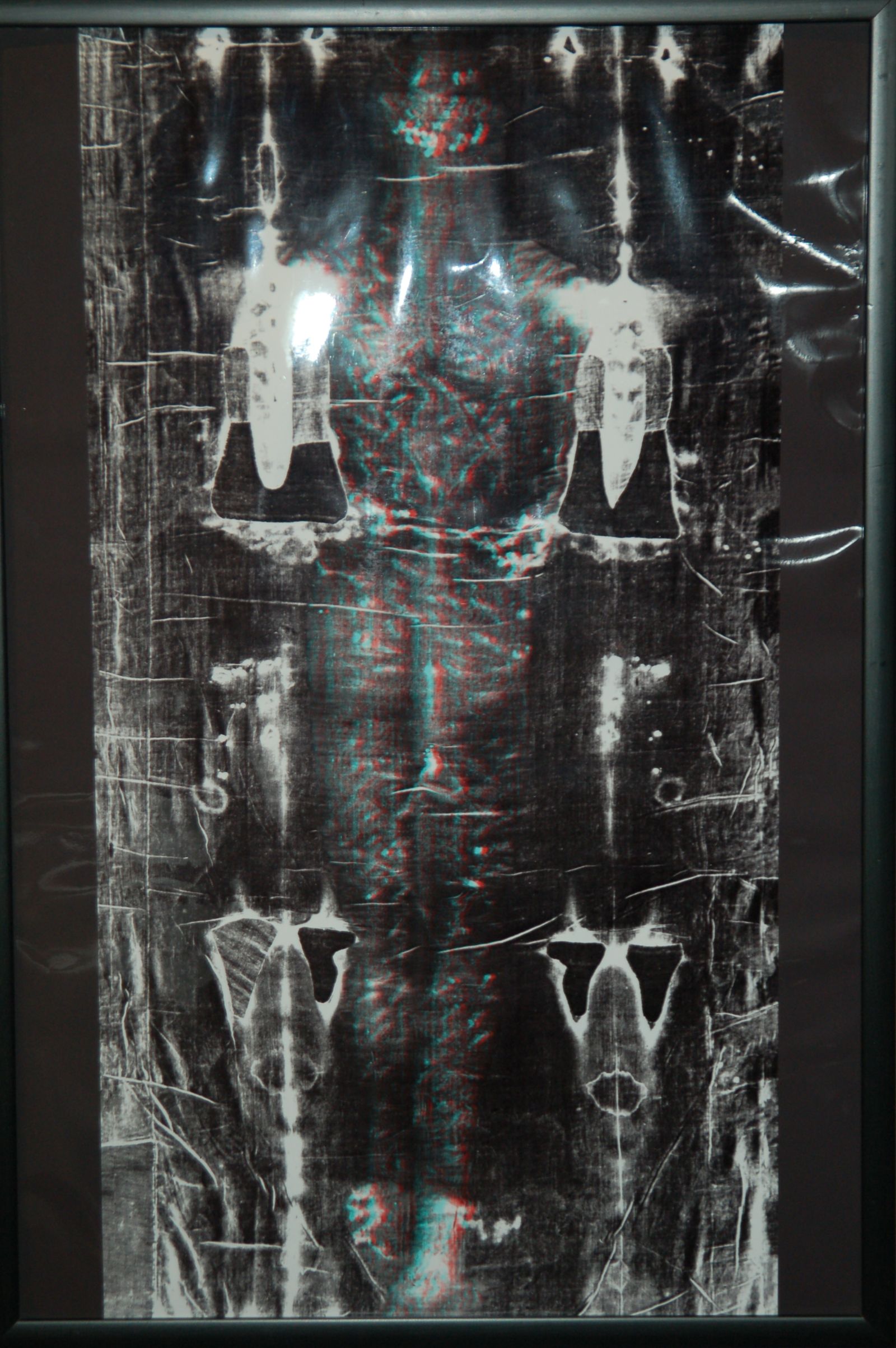 7) During the investigations of the holograms we also found a ROPE-LIKE SHAPE over the left wrist and a relief in the shape of a little ampulla near the fingers of the right hand. Maybe there was the presence of a rope that was used to keep the arms in a fixed position. However more research is needed to confirm these findings! (See picture 8). ANAGLYPH. 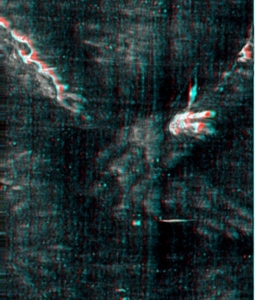 8) On the back of the head we can see that part of the long hair has the shape of a PONY TAIL. (See figure 10).

9) According to some researchers the blood in the hair on the sides of the face originates from the cheek areas. Before the conversion process from 2D to 3D the bloodspots were taken away (because they do not contain the grayscale of the image). When the conversion was completed, the layer (matrix) containing the exact position of the BLOODSPOTS was put on top of the 3D image and the bloodspots on the sides fitted nicely IN THE HAIR, even following on the anatomical right side the natural curving of the hair that is visible in the image. (See picture 11). Picture 11 is ANAGLYPH. 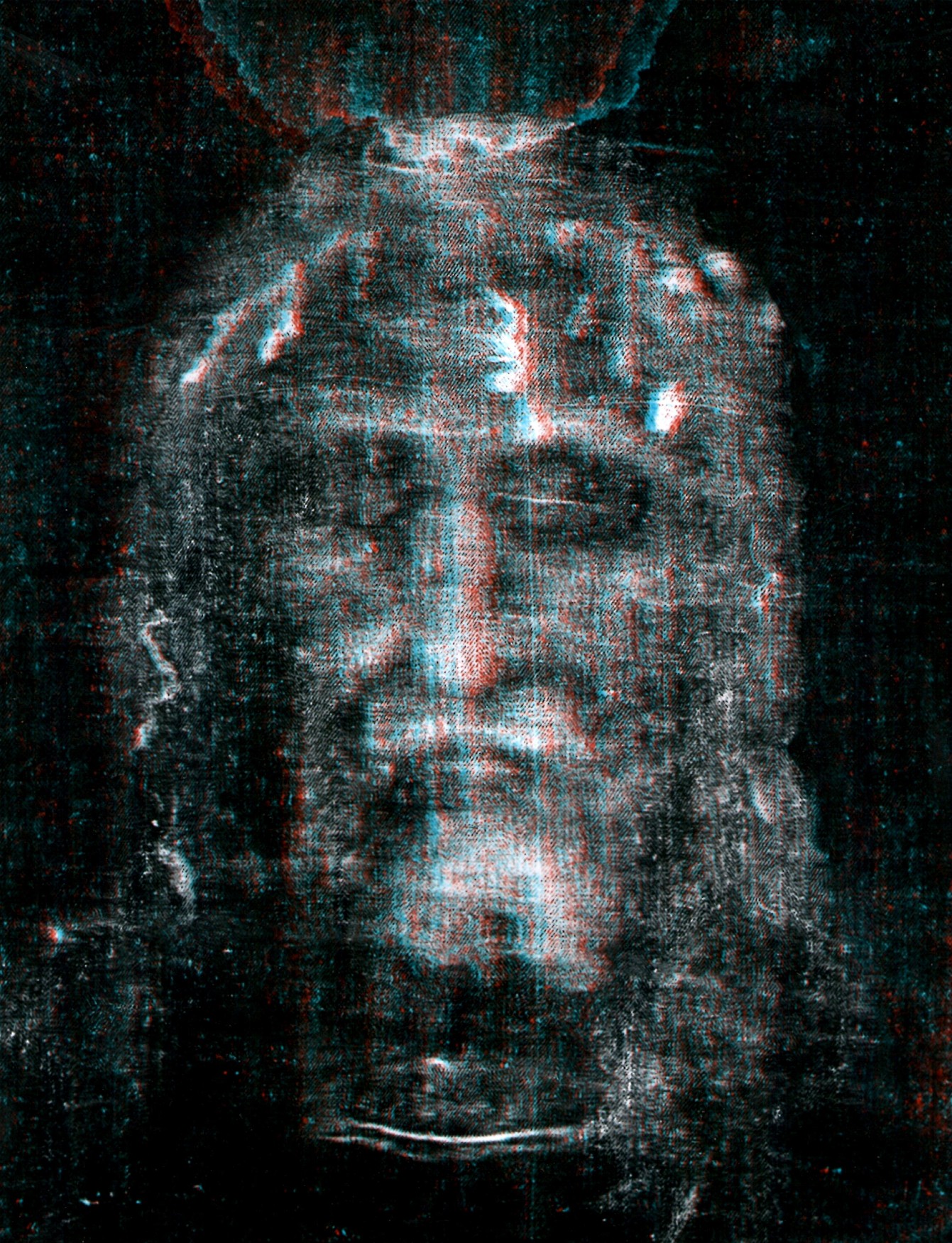 10) Looking at the holograms side-by-side of the front and the back of the body, it is obvious that we see here a bas-relief of the front part of the body and a bas-relief of the back part of the body. However, by estimating the depth of both bas-reliefs, it is evident that a “layer” of the middle part of the body is “missing” and there is an absolute absence of body-information of this part of the body. The missing layer is about 3” to 4”.Now if you measure on the Shroud the distance of the top of the head-front-image to the top of the head-back-image you see that that is about the same distance. MORE ABOUT THIS MISSING LAYER OF THE BODY IN THE CHAPTER OF IMAGE FORMATION—– CHAPTER ISABEL PICZEK.
11) IMAGE-LESS AREAS IN THE GRAYSCALE OF THE IMAGE. When converting the grayscale of the image from 2D to 3D we found that there were image-less areas that did not contain any information. These areas in the body-image showed up as “holes” in the 3D image. For example looking at the face you could see these areas on the anatomical right side of the face, multiple areas on the front of the head, also some on the left side of the face, in the middle of the beard and the right side of the moustache and on the abdomen around the lower arms and the hands. (See pictures 12 and 13). Prof. Avinoam Danin, Botanist, found later that these areas were covered by flowers. FOR MORE ON THIS SUBJECT, GO TO CHAPTER AVINOAM DANIN, HOLES IN THE IMAGE. Picture 12 is ANAGLYPH.

12) In the holograms we found that under the beard in the neck area of the frontal image there is the presence of A SOLID OVAL-SHAPED FLAT OBJECT, measuring about 4.5 by 2.5 inches. In May of 2010 the presence of this solid object was scientifically confirmed by research done by Pete Schumacher with the VP-8 Analyzer. In my investigations I found that on the surface of this object there seems to be three Hebrew letters in relief. This is my PERSONAL observation. (See figures 14, 15 and 16). These figures 14 and 15 show images of the VP-8 Image Analyzer and a solid object under the beard, which is visible in figure 16. 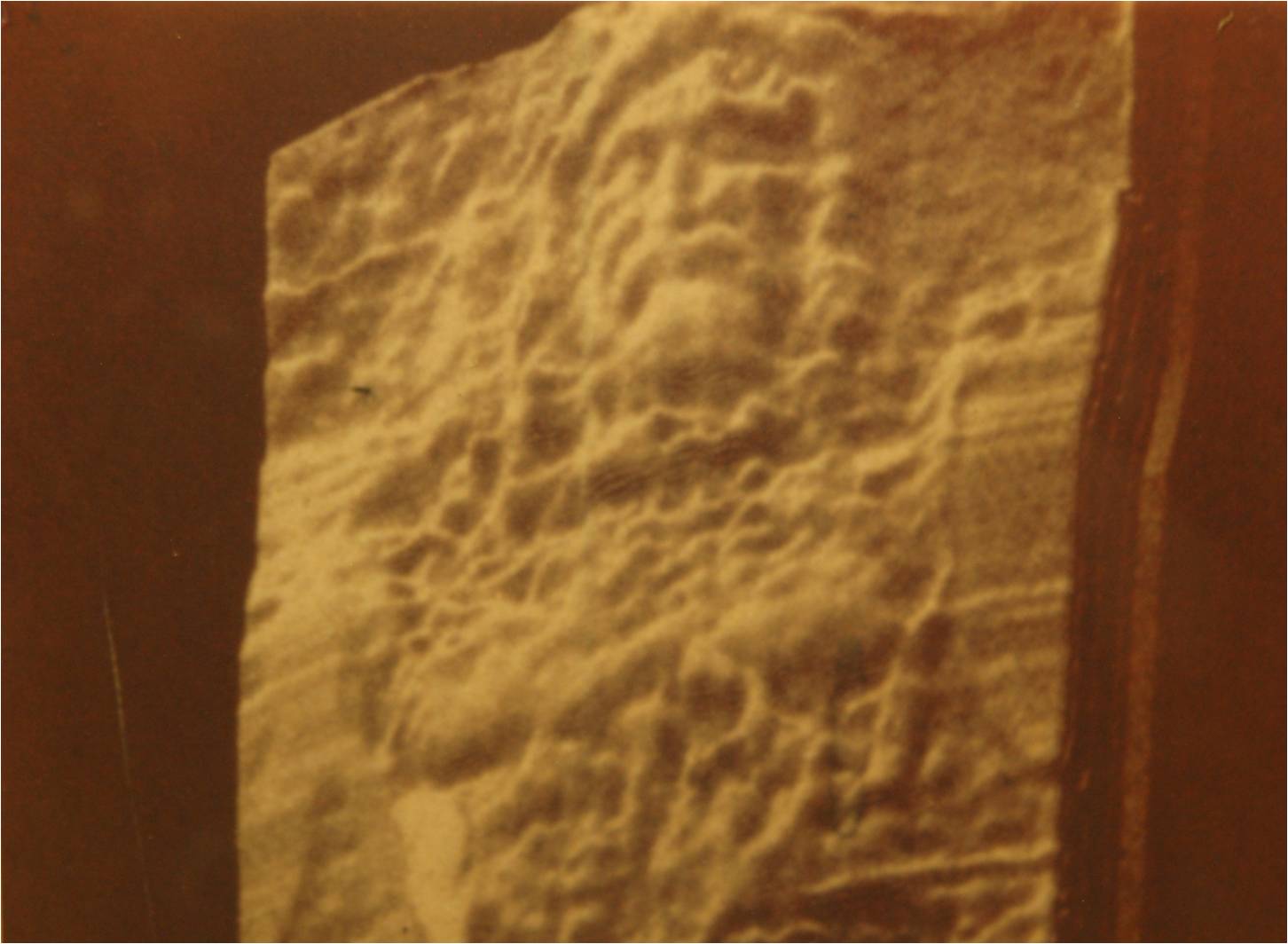