In order to understand the conversion process from the 2D images to 3D we will first explain what the GRAY-scale is. After that we will explain what ANAGLYPH IMAGING and LENTICULAR IMAGING means and then we will show two articles by the 3D specialist Bernardo Galmarini that describe how he managed to extract the 3D information in the conversion process from 2D to 3D from the images of the head and the front and the back of the body.
Finally, in the next chapters, we will give a summary of the different aspects of the conversion process and the 3D materials that were produced, like ANAGLYPH photos, LENTICULARS and finally the HOLOGRAMS and this will be followed by a series of 3D movies that show the head and the front and the back of the body in 3D and moving from left to right and vice versa. There is also a Powerpoint Presentation with the text of this presentation, explaining the producing of the 3D images and some of the findings in the 3D materials.

A densitometer measures the differences in density in a photograph. In a black and white photograph, black areas are dense with information and white areas are void of information. The in-between areas are many shades of gray, from almost white to almost black. You can assign a different number or value to each shade of gray, for example on a scale of 1 to 10, where 1 represents black and 10 represents white. All numbers between 1 and 10 represent then the various shades of grays. This is a gray-scale or gray map, where different numbers represent different densities in the image.
Now you can analyze a photograph, with for example a densitometer, that measures these before-mentioned differences in density, and give each density a different number. When in 1976 John Jackson and Eric Jumper from the Air Force Academy performed this test on a photograph of the Shroud and then used the VP-8 Image Analyzer to translate this information in vertical height, they found to their big surprise, that this resulted in a perfect 3D model, with an undistorted anatomy of the face and the body.

It could even be turned sideways, so that the face could be seen in profile. In the Shroud photographs you will notice, that the parts of the body that were close to the cloth show darker (denser) than the parts of the body that were further away from the linen cloth, with very subtle graduations of gray in-between (in the positive image). This is a very unique inverted distance to image relationship. There is no existing photograph of a face or a human body that contains this information and when converted in the VP-8 Analyzer will always give distortions, like the nose pressed in the face and the arms pressed into the body, with a flattening of the whole relief.

The importance for the Shroud image is, that we used this gray-scale, present in the ENRIE photographs, from which we know that every pixel contains the cloth-to-body information, to translate this mathematically into vertical height on the Z-axis. This is called the conversion process from 2D to 3D.
If you look at the photograph of the positive and the negative image of the Shroud face you will detect the different densities present in the image. The positive image is like you will see it on the real Shroud and the negative is the reversed version (reversal of dark/light and left/right) as shown by a photographic negative, where we see the image like in real life. 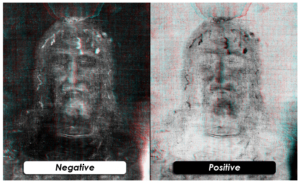 In the DUTCH HOLOGRAPHIC LABORATORY in Eindhoven in the Netherlands, Walter Spierings, the Director, and his team improved the conversion process that had been done by Bernardo Galmarini. 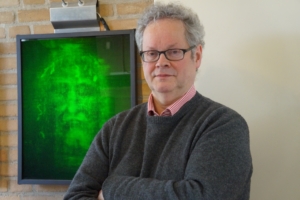 In his own words: “We used the negatives of the famous Enrie photographs of the Shroud from 1931 as the source for a gray scale calculation to determine the theoretical depth of the different parts of the image. This can be understood when you think of a ball (see photographs). It will show darker and lighter areas in accordance with the depth of a particular spot on the ball”. 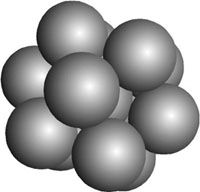 The data from the gray scale calculation as performed on the original negative image of the Shroud, turned out to deliver a realistic shape of a person. These data were used as input for the production of the Holograms. It is a good example of one of the techniques, to generate a 3D image when we are dealing with just a 2D image as a source. The existing “hidden“ 3D information in the image of the body on the Shroud facilitated this process very much”.