The VON ERLACH HOLY SHROUD PRAYER BOOK, in Latin and German, manuscript on vellum with illuminations by the Master of Claude de France (Tours and Switzerland, c.1520s and c.1540s)
A highly bespoken production containing perhaps one of the earliest surviving painted representation of the Shroud of Turin, before it suffered damage from a fire in Chambery in 1532. The prayerbook, with stunning, previously unrecorded work by the Master of Claude de France, belonged to Johannes von Erlach, Schultheiss of the city of Bern, and then to his son, Bernhard, members of one of the most fascinating families of the Swiss Reformation.
PROVENANCE:
The manuscript is in two parts: the first dates to the 1520s. The von Erlach coats of arms identify the owner as JOHANNES VON ERLACH, Schultheiss of the city of Bern, Swiss ambassador and military commander. The astonishing representation of the Turin Shroud helps situate the manuscript further within its historical context: Johannes traveled to Geneva in 1512 to meet Charles III, Duke of Savoy. The Shroud was then held at Chambery, capital of Savoy, and would, in 1532, be damaged by a fire. Could Johannes have been so inspired by a visit to the Holy Relic to have it included in his prayer book? A “terminus ante quem” for the production of the first part of the manuscript is provided by the fact that in 1528 Bern converted to Protestantism, and we know that Johannes led an army to put down a rebellion against the new faith—it is unlikely therefore that he would at this stage have commissioned such a “Catholic” manuscript. A devotion to Saint Bernhard suggests that the manuscript passed to Johannes’ son BERNHARD VON ERLACH (1518-1591).
ILLUMINATION:
The double-page miniature depiction of the Shroud of Turin in its undamaged state, held by three Bishops of Savoy, is perhaps the earliest explicit painted representation of the Holy Relic as we know it today. Visible in this painting are the so-called poker-holes, and that proves that the painter almost surely must have seen the original himself. 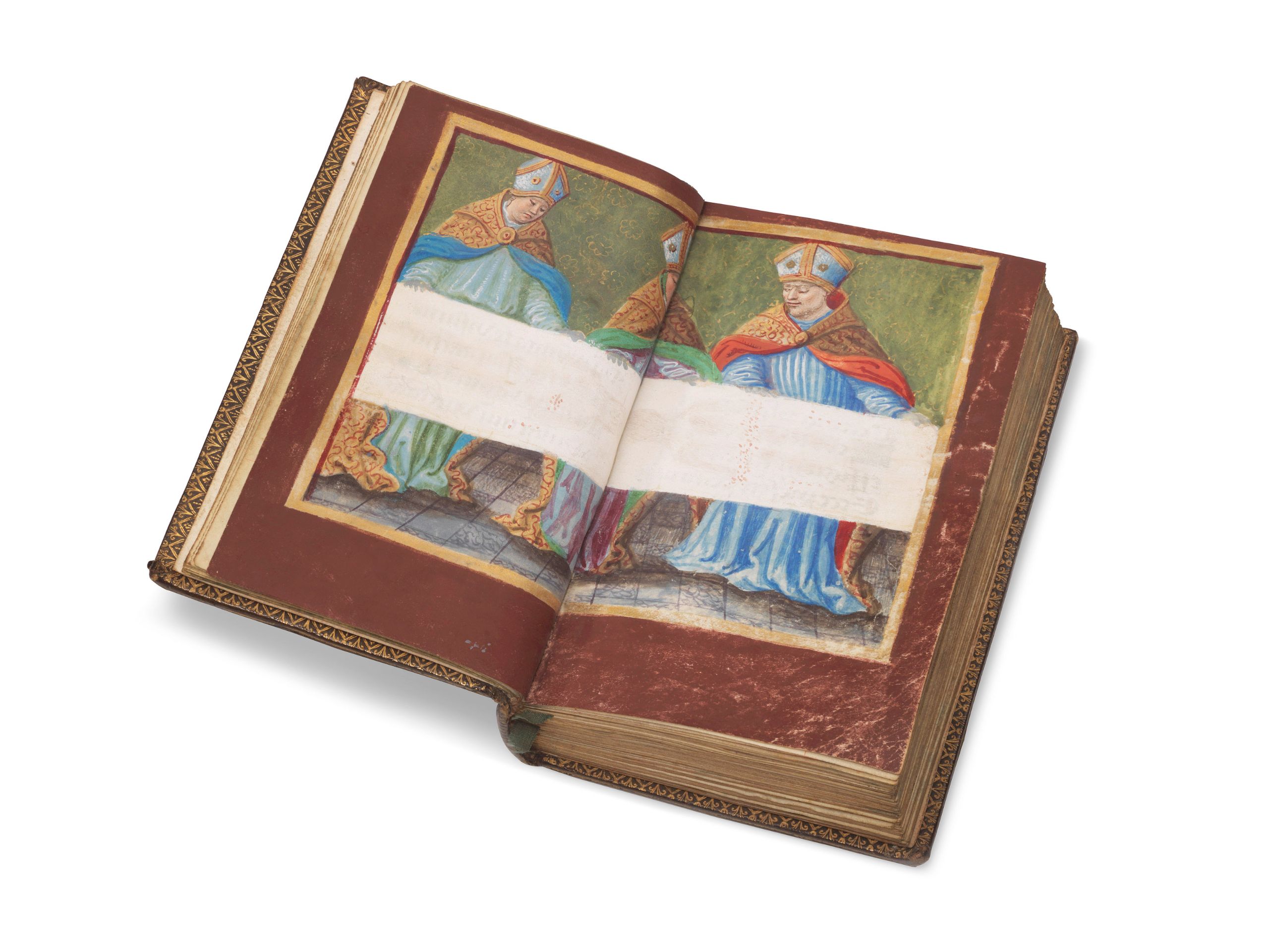