INTRODUCTION:
In 2005 Walter Spierings, the Director of the Dutch Holographic Laboratory in Eindhoven in the Netherlands, introduced me to the work of Bernardo Galmarini. He was at that moment one of the best specialists in the conversion process from 2D to 3D. Walter had worked with him in the past and was very satisfied with his 3D work. So, I made an appointment with Bernardo and travelled to Buenos Aires, Argentina, where he was living. I explained to him that we wanted to produce a 2D to 3D conversion of the body on the Shroud, based on the grayscale in the image, in order to be able to make Holograms from these materials. I also explained to him the findings of John Jackson and Eric Jumper with the VP-8 Image Analyzer and that they could confirm that in the image was embedded 3D information in the grayscale of the image. This was enough for Bernardo to start with his work.
So after finishing this work on the head and the front and the back of the body he presented the results and wrote this article of the conversion of 2D to 3D of the front and the back of the body. 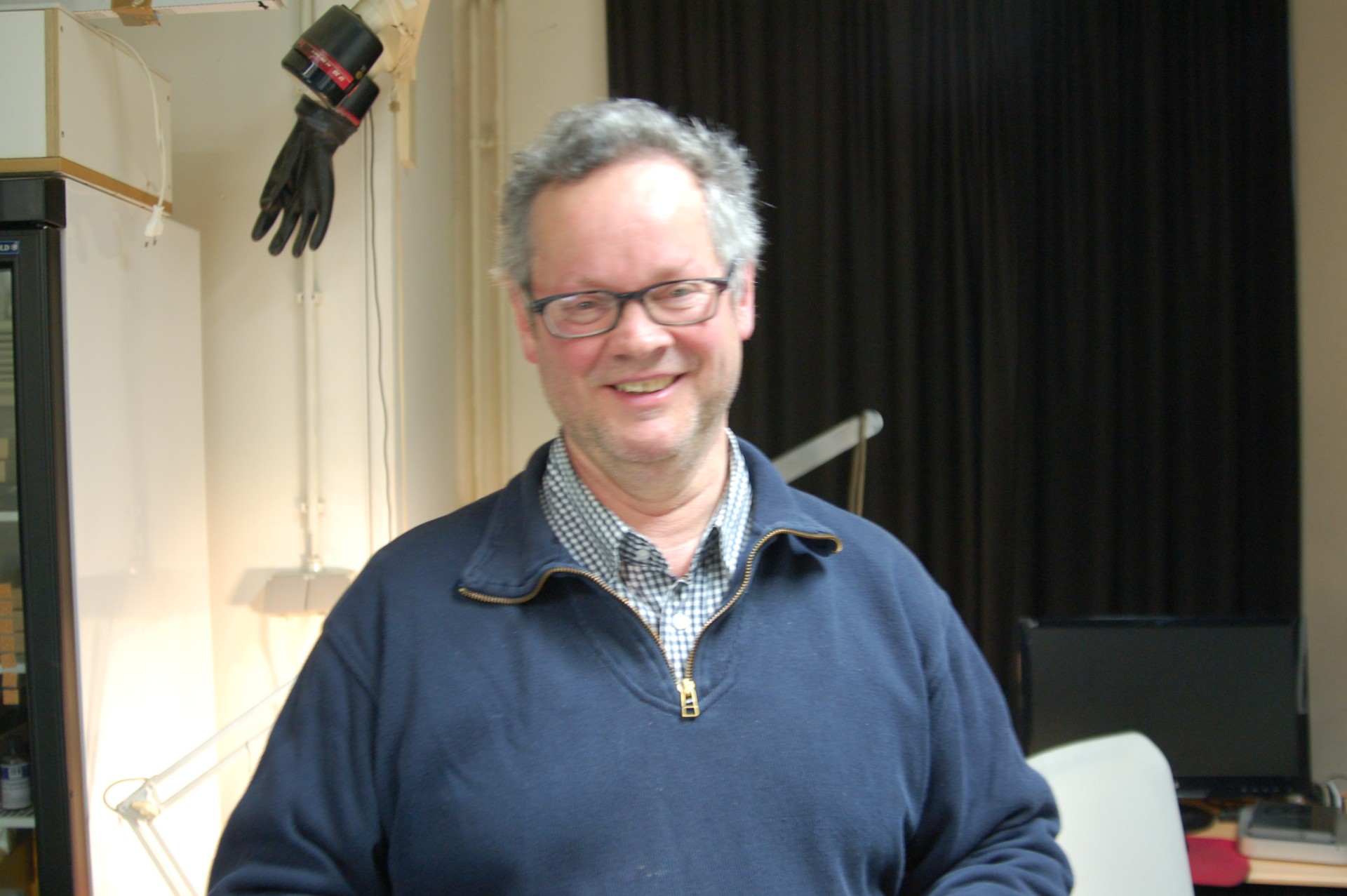 In this project, my intention was:
To see how the gray values (depth-maps)—already present in the Turin Shroud Image– (as Jackson and Jumper discovered in 1978 with the VP-8 Analyzer), could represent, by changing accordingly the parameters of the displacement of gray values on the Z-axis, a more “natural” human figure and not just a “bass-relief”-style 3D image, but with roundness and proper shapes of a human body. And then, after achieving this, to execute the following procedure:
1) A very detailed and precise combination of: Artificial and subjective 2D to 3D conversion (applying my artistic skills and my long experience in this area), and
2) A more scientific or objective approach, using the depth-map based three-dimensional image, and here excluding the deformations or image-free areas in the image, and using the most anatomically correct zones, that show a more natural shape. (Deformations or image-free areas, that may be due to the presence of flowers around and over the body on the Shroud, and/or simply due to the passing of time). So, I eliminated from the study these image-free areas, that didn’t show three-dimensional information corresponding to a human body, and I only based my work on the points or parts that showed uniform anthropomorphic 3D data. And finally, I adjusted artistically the images into a 3D figure, making the depth-map values coincide with the depth-values derived from my 3D conversion process in the front and back images. For instance: Finding image-free areas on the forearm that anatomically should fall on a straight line from elbow to wrist, these zones were adjusted to coincide with an anatomically correct image. This means, that some very important features, such as the hands, arms, chest, neck, forearms, hands, fingers, legs, feet are anatomically very realistic, based on the gray-scale values, because they do not contain many image-free areas, while other areas with missing information need a correction to coincide with the normal human anatomy.

IMPORTANT: As we know, the blood-images result from direct contact and do not contain gray-scale data. Thus, when converting gray-scale data to (anatomic) topography, the relative “whiteness” of the blood images results in the appearance of this blood, floating above the body features and skewing adjacent anatomical features. Therefore, I isolated and temporarily removed the blood images and then filled the resulting voided spaces with the average surrounding gray-value. Once having done this, the 3D depth-map looks more uniform and soft, so the relative position of the different parts and their angulations are more accurate. 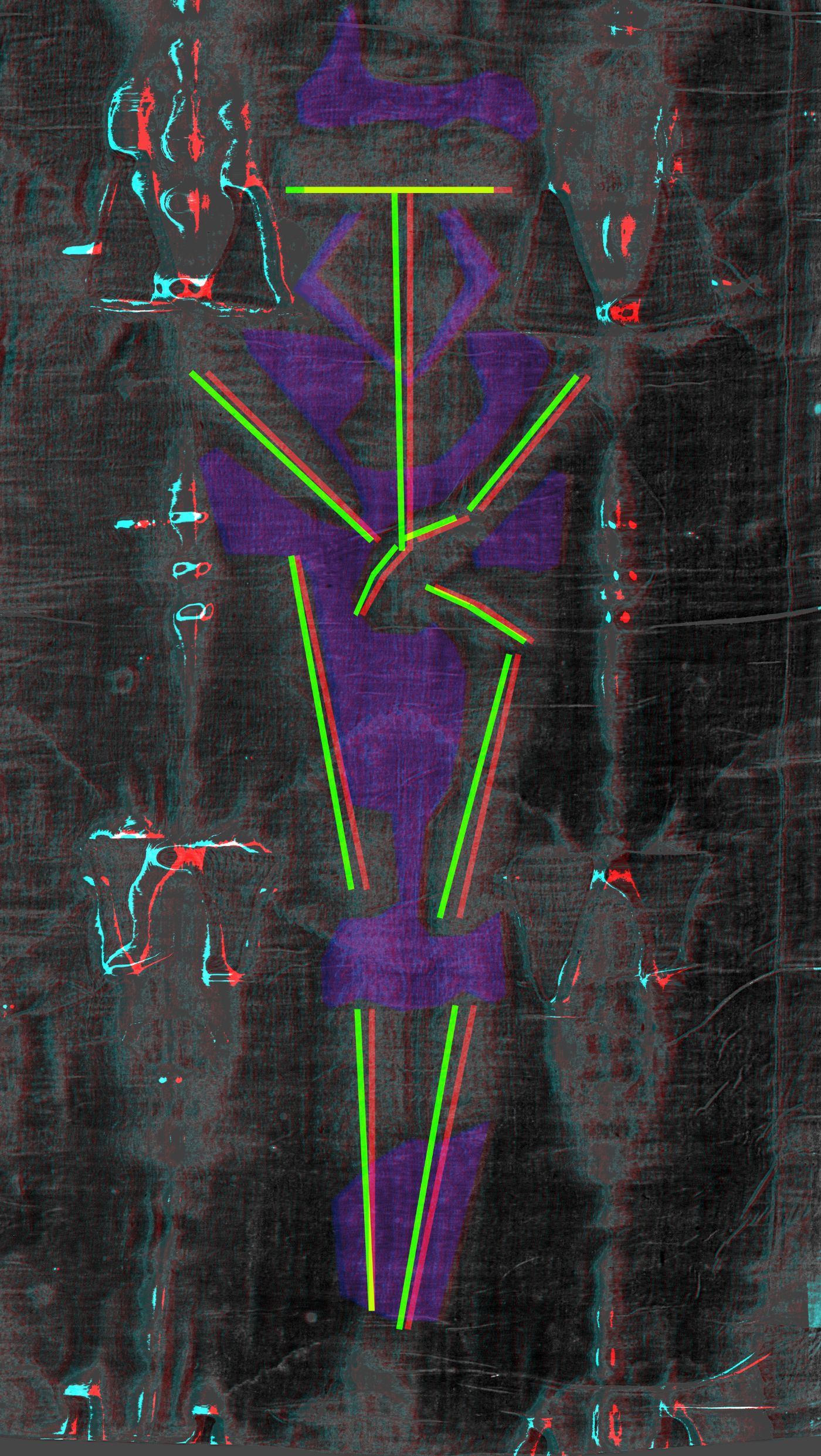 Let us see how the depth-map 3D image looks like, once the blood stains are filled in with a medium gray value, (Figure 1) and which parts of the depth-map data are usable and which ones not. I painted the non-usable parts in purple/blue (Figure 2). And finally, (Figure 3) shows the angulation of the main body parts, as shown approximately in the uniform depth-map. (The matter of the feet is a special issue, because of the presence of much digital “noise”, and will be treated separately).
NOTE: In the analysis of the body (front and back), I removed the head, because the data in the full body image (when the depth-maps are applied), are much less than the data in the much higher resolution image used in the 3D conversion of the head alone. The analysis done in that conversion will also be applied in the conversion of the whole body, and I used the same parameters and high resolution for this 3D conversion process. So, the 2D to 3D conversion of the head will be delt with separately (see chapter conversion of the Head).

POSITION OF THE FEET

The position of the feet into the 3D space is a special matter that required an analysis of its own: 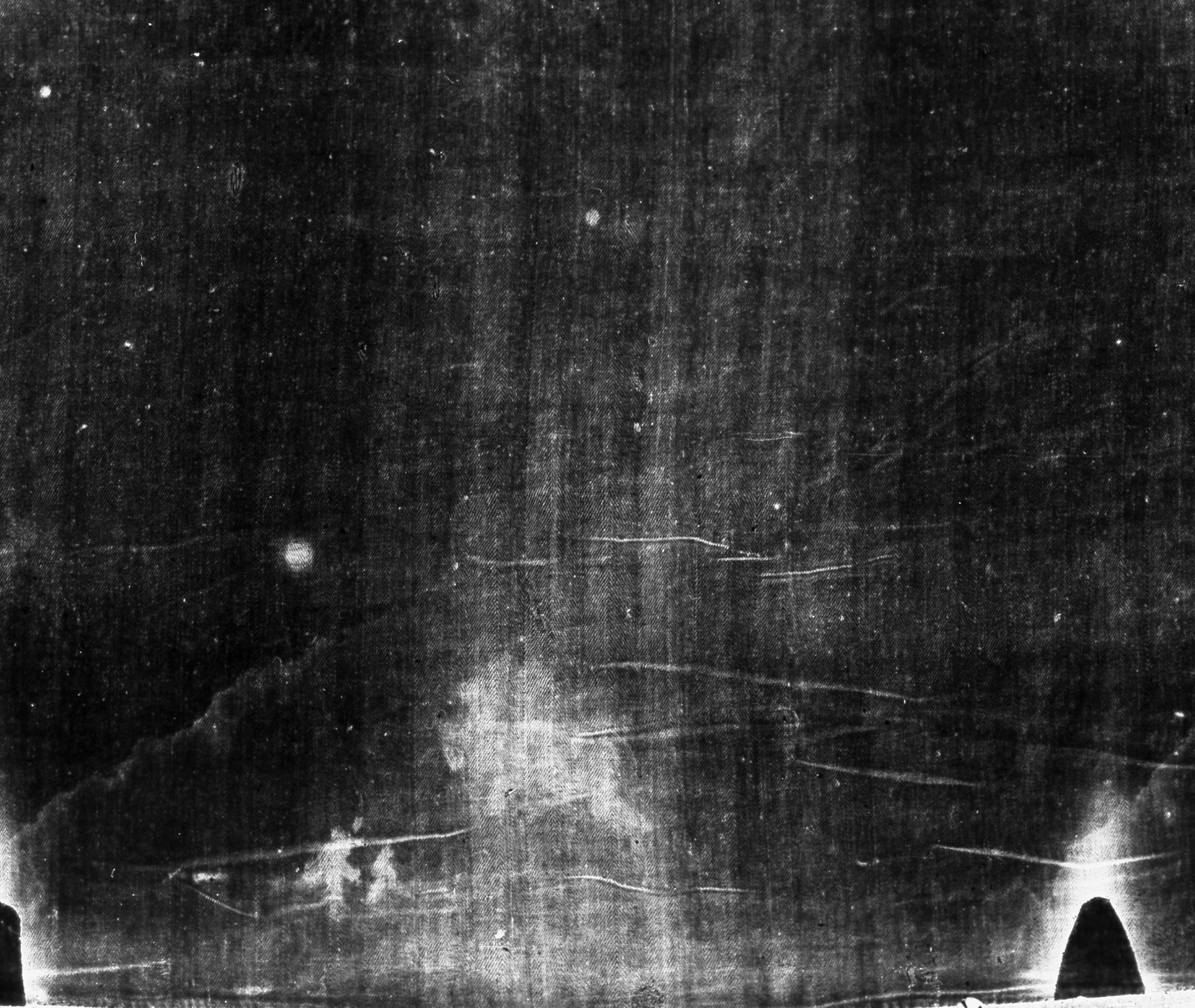 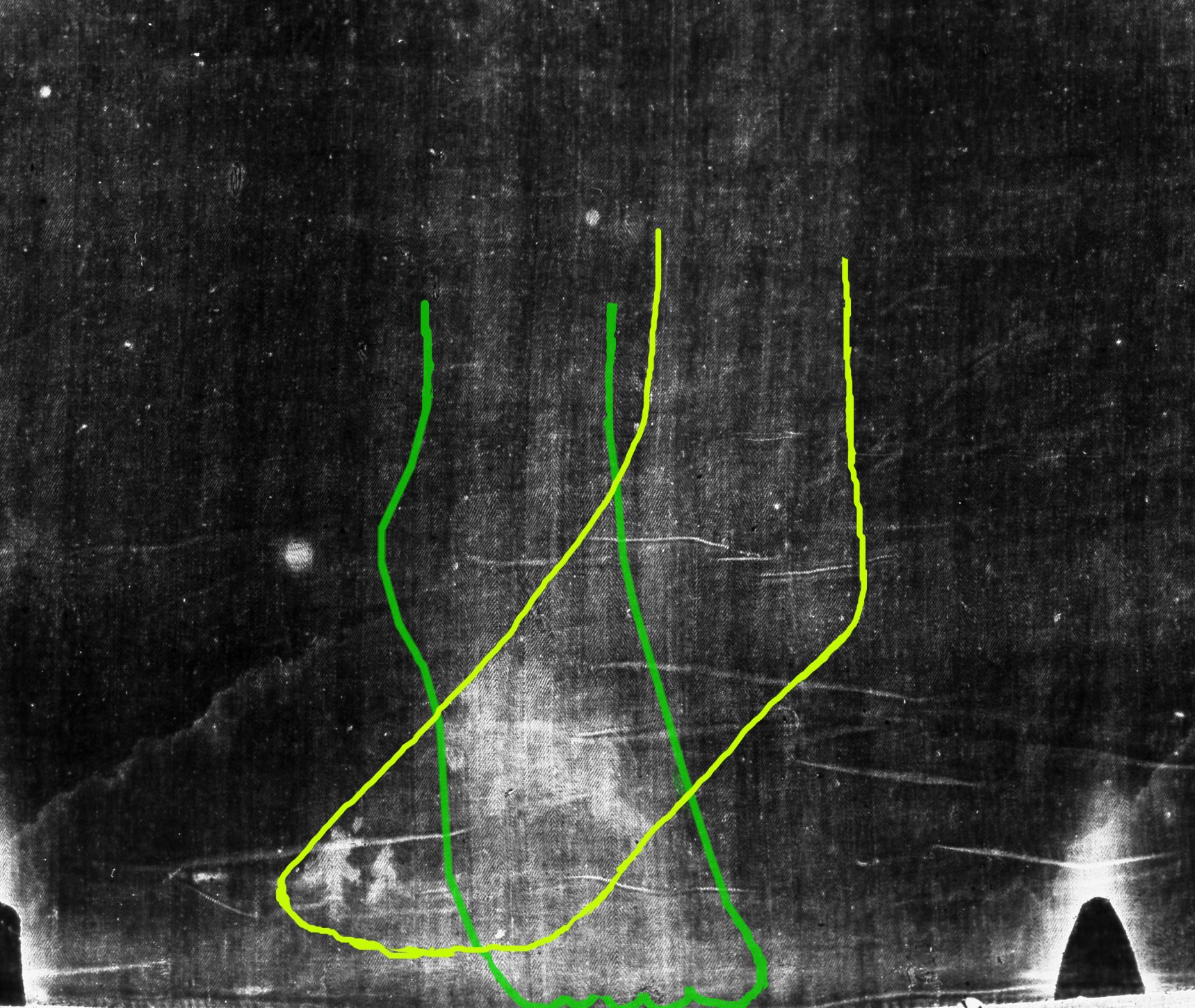 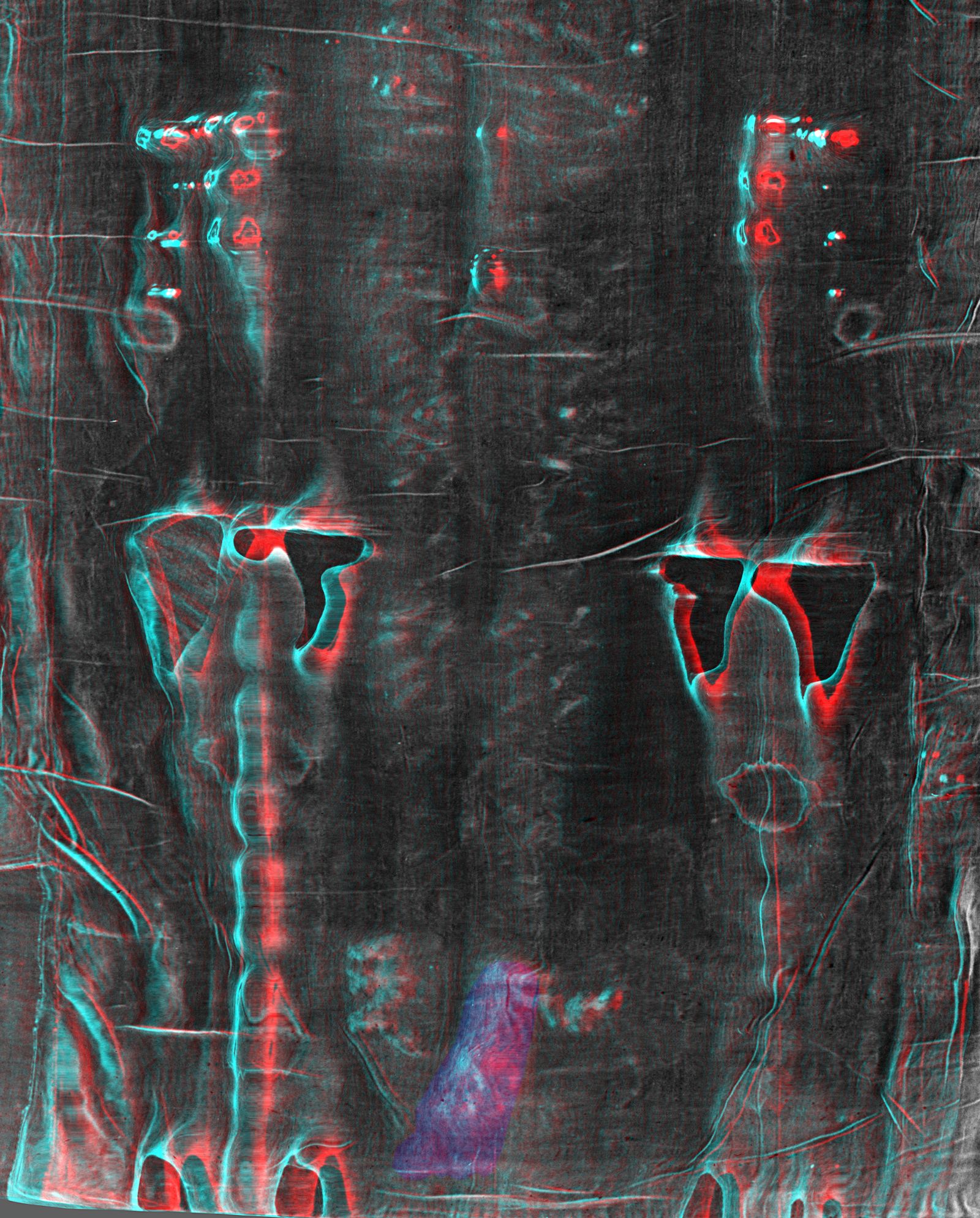 Because of the presence of a big blood stain (figure 4), there is quite a change in the depth-map readings of the parts of the feet that are close to this stain. This “digital noise” is very confusing. The relative position of the feet was not completely visible in the frontal view (figure 5), however, quite clear in the back view (figure 6), which shows clearly that the right foot is placed UNDER the left one. Left and right refers to the viewer being placed in front of the front view of the body. We can even see in the back view an almost complete and regularly shaped footprint, with the shapes of the toes, and the angulation of the foot. 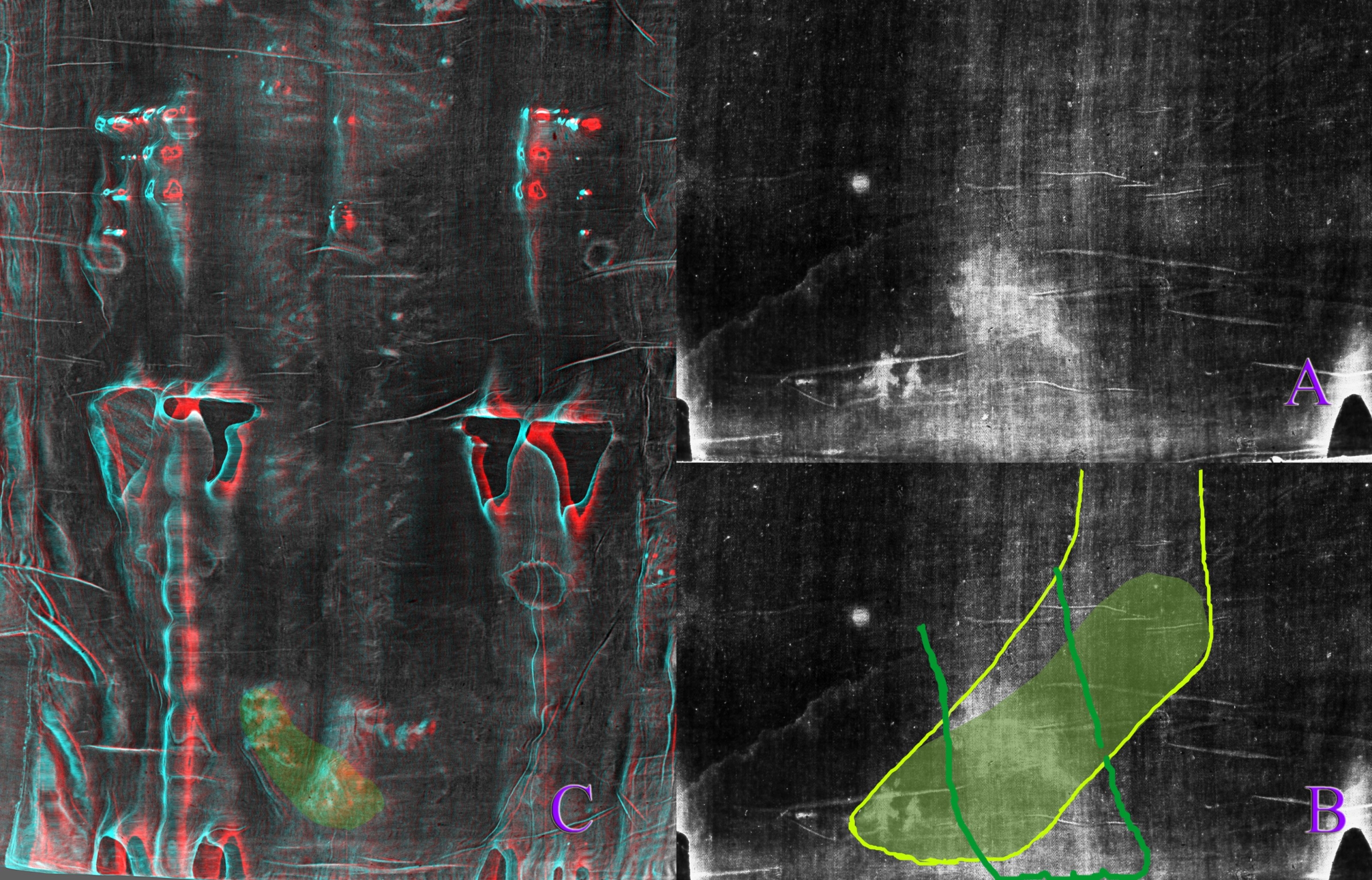 The left foot is not quite visible and clear in the back-view image, but it definitely is in the front view image. We can see a quite clear line of the contour of the left foot crossing OVER the right one (Figure 7-A) and it is marked here with a green line (Figure 7-B). I reconstructed an approximated shape of the left foot crossing over the right one, based on the frontal image and then used these data in the back view image, using as an anchor point the tips of the toes (with the blood stains), which are clearly visible in both frontal and back views (Figure 7-C).

So up to now we have:

1) In the back-view image, a very clearly visible right foot and a very confusing image of the left foot, and

2) In the front-view image, a very clearly visible left foot and a quite confusing lower part of the right foot, with almost non-existing data of the heel area of this foot.

(Figure 8) shows how the right foot contour is clearly shown and it even appears to be UNDER the left foot.

(Figure 9) shows the same image in the depth-map version and shows, even with the confusing digital noise, that the left foot crosses OVER the right foot.

Knowing the position of the feet, it was then possible to mark in the 3-dimensional space the relative position of the feet and also of the lower parts of the legs, based on the depth-map images and it shows basically, that the left foot and the left leg are over the right ones. (Figure 10). 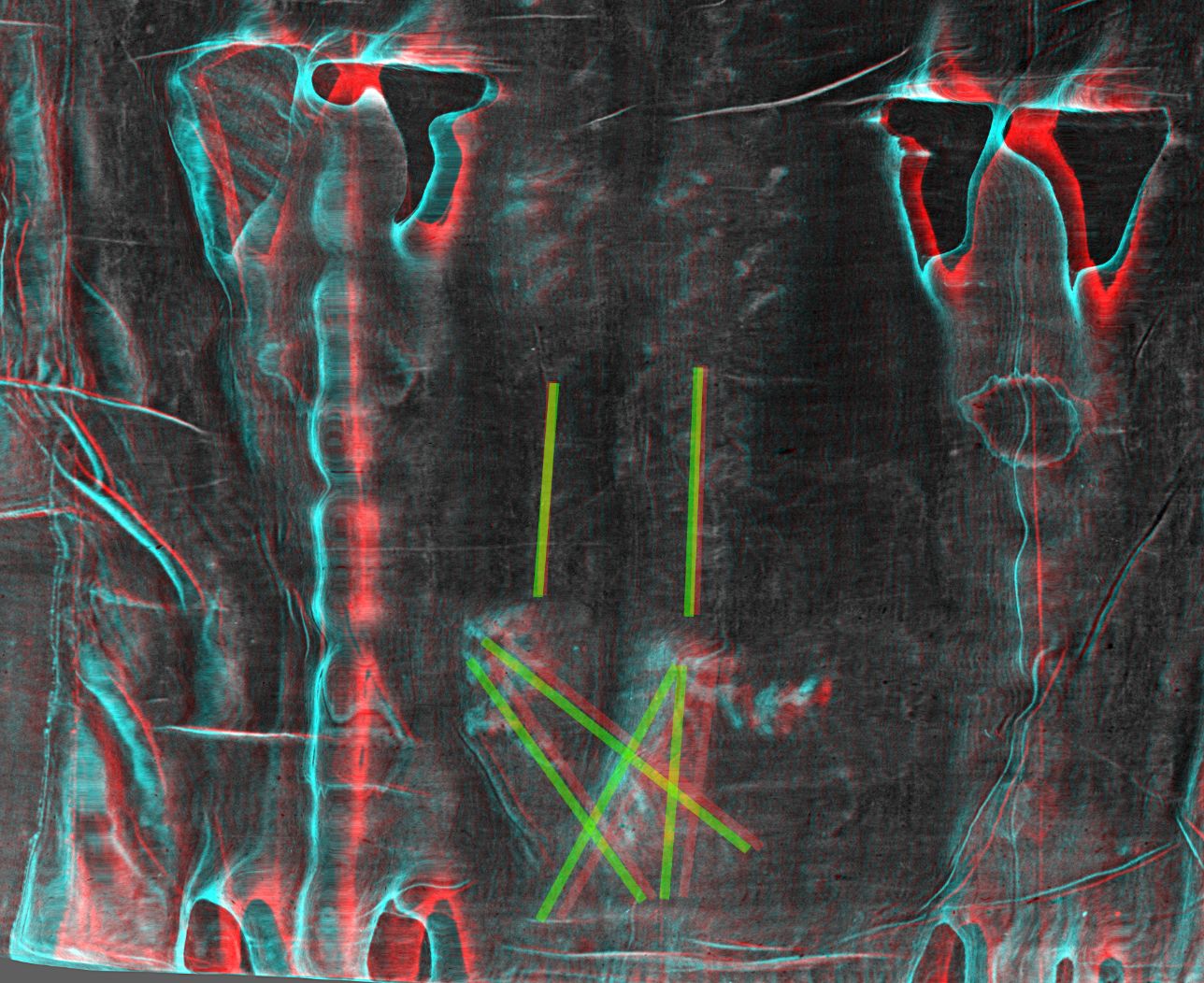 When we put side by side the results of the 2D to 3D conversion process and the depth-map 3D version we can make a series of observations (figure 11 and figure 12):

B) The hair falls down along the neck and the dorsal spine, and looks like “wet”, forming a thick “rope”-form. It is also clear, that other parts of the long hair continue to the front part of the body (chest and shoulders).

C) The buttocks do not look flat but tensed (Caused by the rigor mortis).

D) The images of the flagellation wounds follow the curved surface of the buttocks and that is a remarkable finding!!!

E) The legs look quite confusing in the back-view image. The upper part of the right leg has almost no 3D data and the left leg shows imageless areas that after conversion from 2D to 3D show as “eggs” or “holes”. To appreciate the bending of the legs we will have to rely on data from the front view image.

F) The position of the feet in the back -view image was already discussed in detail, the conclusion being, that the right foot is clearly visible, as is the tip of the left foot that seems to be crossed in an angle over the right foot. (Like an X). 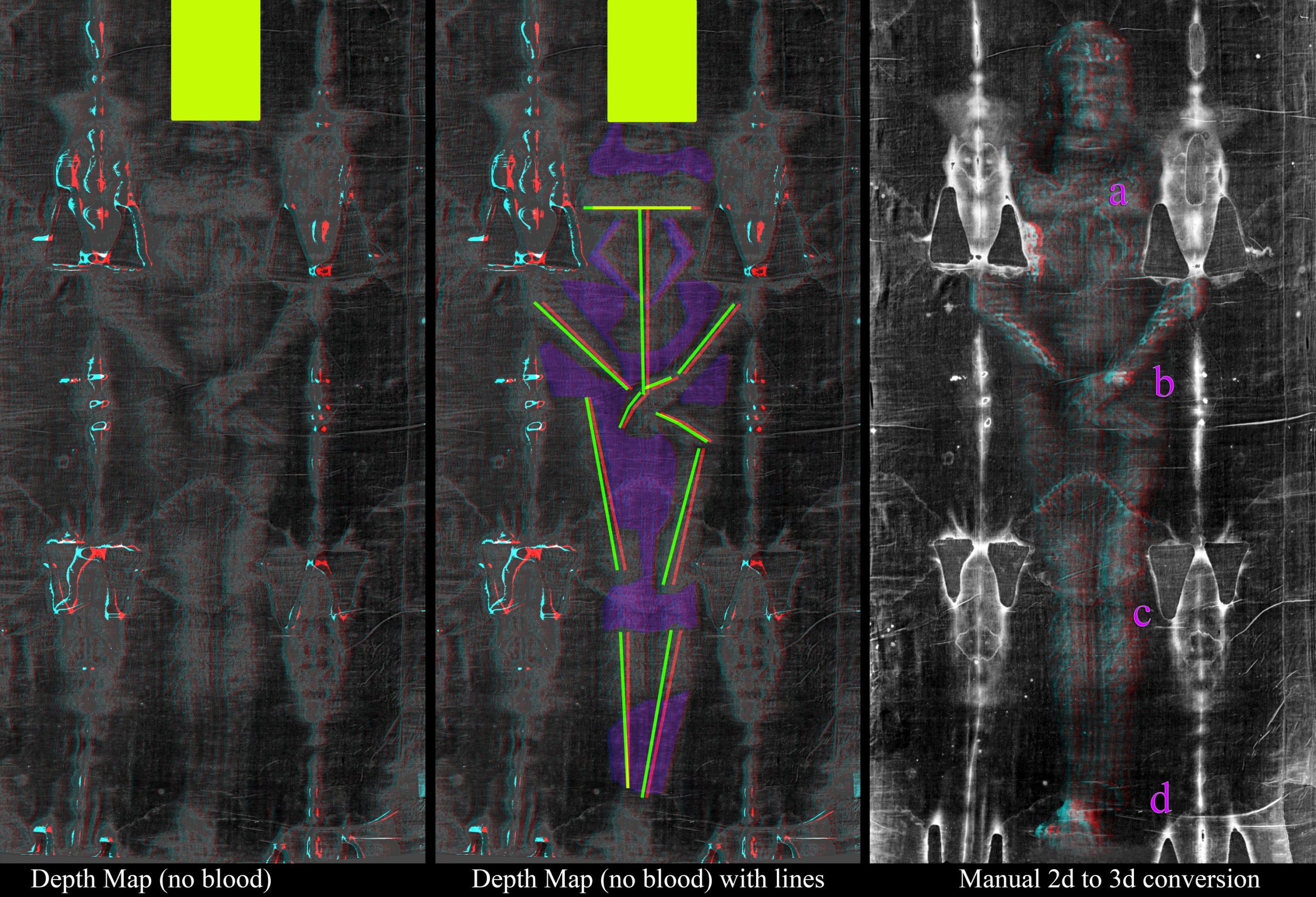 In the front 3D conversion, I based the conversion mainly on the areas with uniform 3D data of the depth-map 3D image, after taking off the blood stain images to make the 3D data more regular in the whole body, avoiding deformations in the areas surrounding the blood stains, which show up as almost pure white. So, I observed in general terms, the relative positions of the arms, legs and the body, seen in the depth-map 3D image, and reproduced that in the manual 2D to 3D conversion and made the next observations:
A) The chest looks (in the depth-map) like in an upward position in respect to the pelvis area, as if it were inclined to the viewer, and also larger than the normal anatomy.

B) The arms are in an almost horizontal plane and seem to be rigid, as the elbows do not incline downwards, but form a plane together with the lower arms and the upper arms. The anatomical left lower arm has a higher bending (Elbow is higher than the hand) as the left hand is crossed over the right hand. So, it is a natural and correct bending. This we can observe in the depth-map image. The right wrist is under the left hand, over the space between the two legs, and the right hand angles upwards and follows the left upper leg curvature.
This is also shown in the depth-map, combined with the fact that the fingers of this hand bent downwards along the left leg curvature. The left hand is clearly bent at the wrist and the fingers, as is also shown in the 3D depth-map data.

C) The position of the legs was based on the relative position and angles of both legs, as shown in the depth-map image, so the left leg a little bit more bended and over the right leg.

D) The feet. The left foot crosses in an angle over the right foot like an X, with the tips of the toes visible.

IMPORTANT: In order to be as accurate as possible, the materials for the studies came from different sources.

Second and third generation photographs made by Giuseppe Enrie in 1931 that were made available by Prof. Alan Whanger. The original source of these photographs was the Guild of the Shroud and Father Otterbein made them available to Prof. Whanger for research purposes.

Photographs (black and white and UV-photographs) made by Vernon Miller, the technical photographer of the STURP team in 1978, and made available to us with the cooperation of Tom D’ Muhala and permission of Vernon Miller.

Photographs of Barrie Schwortz, also a technical photographer of the 1978 STURP team. Barrie gave us permission to use his photographs of the face and the body to create the first series of holograms in 2005. The rights were given by STERA, and Barrie is the Director of this foundation.