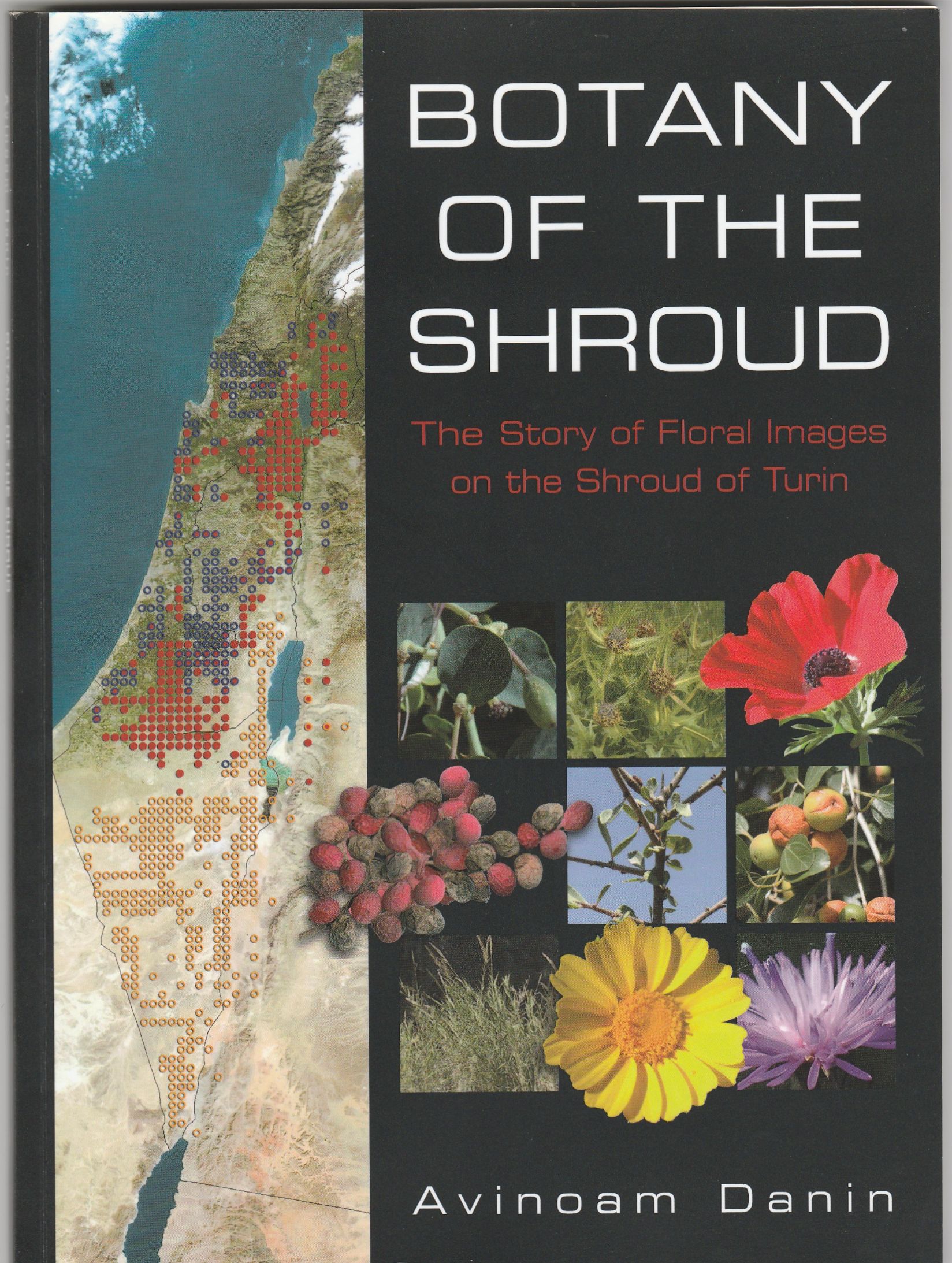 For the last 44 years the main academic activity of Avinoam Danin has been dedicated to interdisciplinary research involving the identity and distribution of higher plants, microorganisms, other organisms, and their relation to the environment. The results of his investigations on higher plants and their habitats have been published in 5 books, and 183 articles in English, 5 books and 247 articles in Hebrew: one book is bilingual, and one in Italian.

He discovered many plant species that had not been found previously in Israel, Sinai, and Jordan. In addition, he described more than 40 taxa new to science, belonging to various families.

The study of plant names and their use by the Bedouins in the Negev and Sinai led him to cooperate with biochemists and pharmaco-gnosists in the search for natural chemicals, especially in aromatic plants. This contributes towards the search for potential medicinal plants.

Mapping the distribution of plants in Israel in squares of 5 x 5 km enabled him to create a data base from which the flora of Israel was studied, and a new phytogeographical map was drawn. It was also used in several forensic investigations. The most recent and important one is detecting the origin of the Shroud of Turin in the vicinity of Jerusalem. 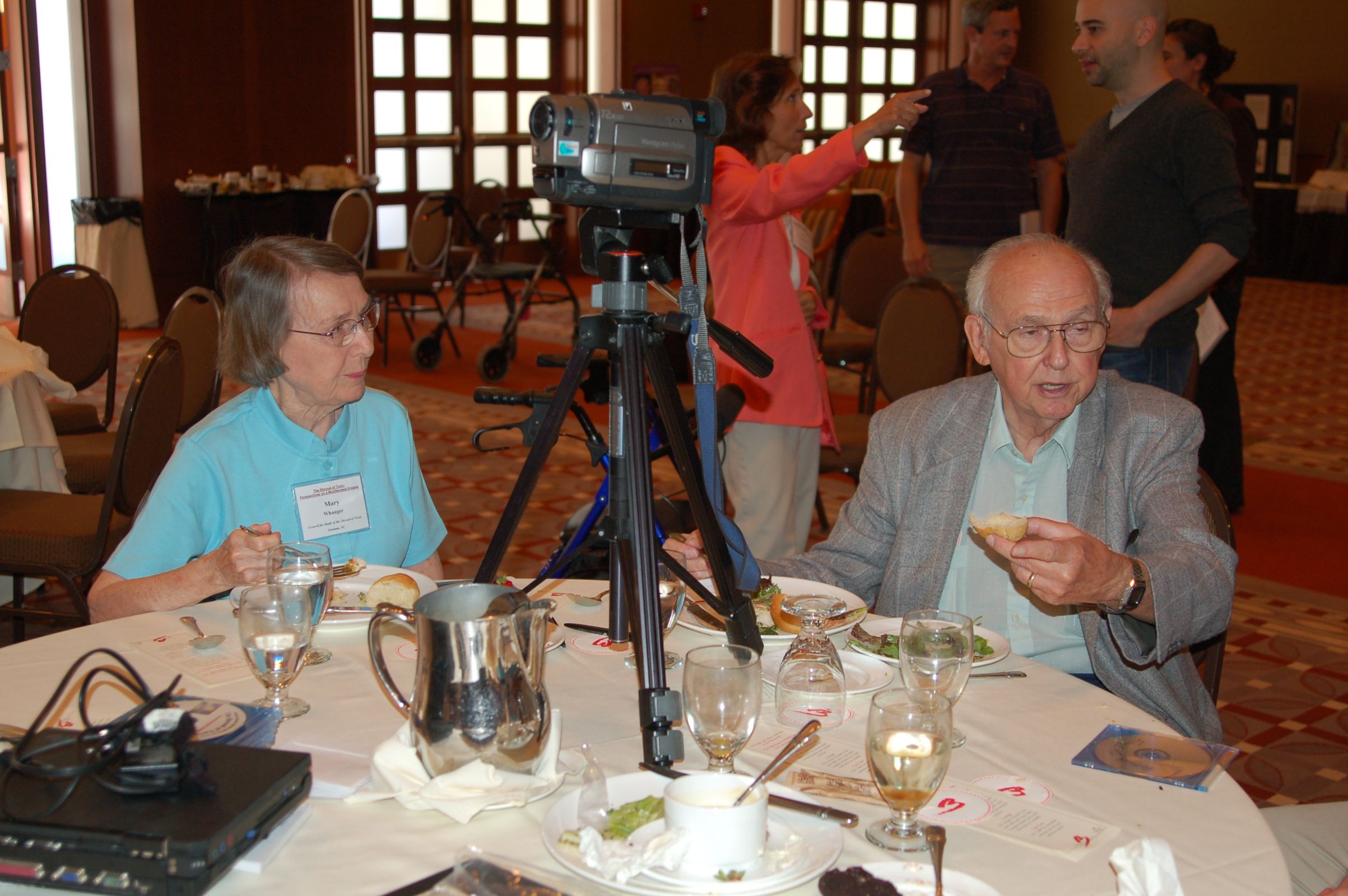 His involvement with the study of the Shroud started in the early 1980’s, when he received a letter from Paul Maloney asking him to do botanical research on the plant images that had been seen on the Shroud. But nothing came of this, until he was visited in Israel by Alan and Mary Whanger in September of 1995. They had studied these images. The Whangers determined 28 plant species by comparing the images to 1:1 drawings of plants illustrated in the first three parts of the Flora Palaestina then available. Avinoam saw the images they had seen and then found additional ones himself. The conclusions from his botanical research and findings were:

1) The area where the assemblage of three indicator plants could be freshly collected and placed on the Shroud near the man’s body is the area of Jerusalem to Hebron.

2) March- April is the time of the year when the whole assemblage of some ten of the plants identified on the Shroud is in bloom.
3) Ferocious thorns of two trees of this region were found near the man’s head and a reed was laid alongside his body.
4) Special attention was given to covering parts of the head of the man on the Shroud with daisy-like flowers after their carrying stalks were removed. 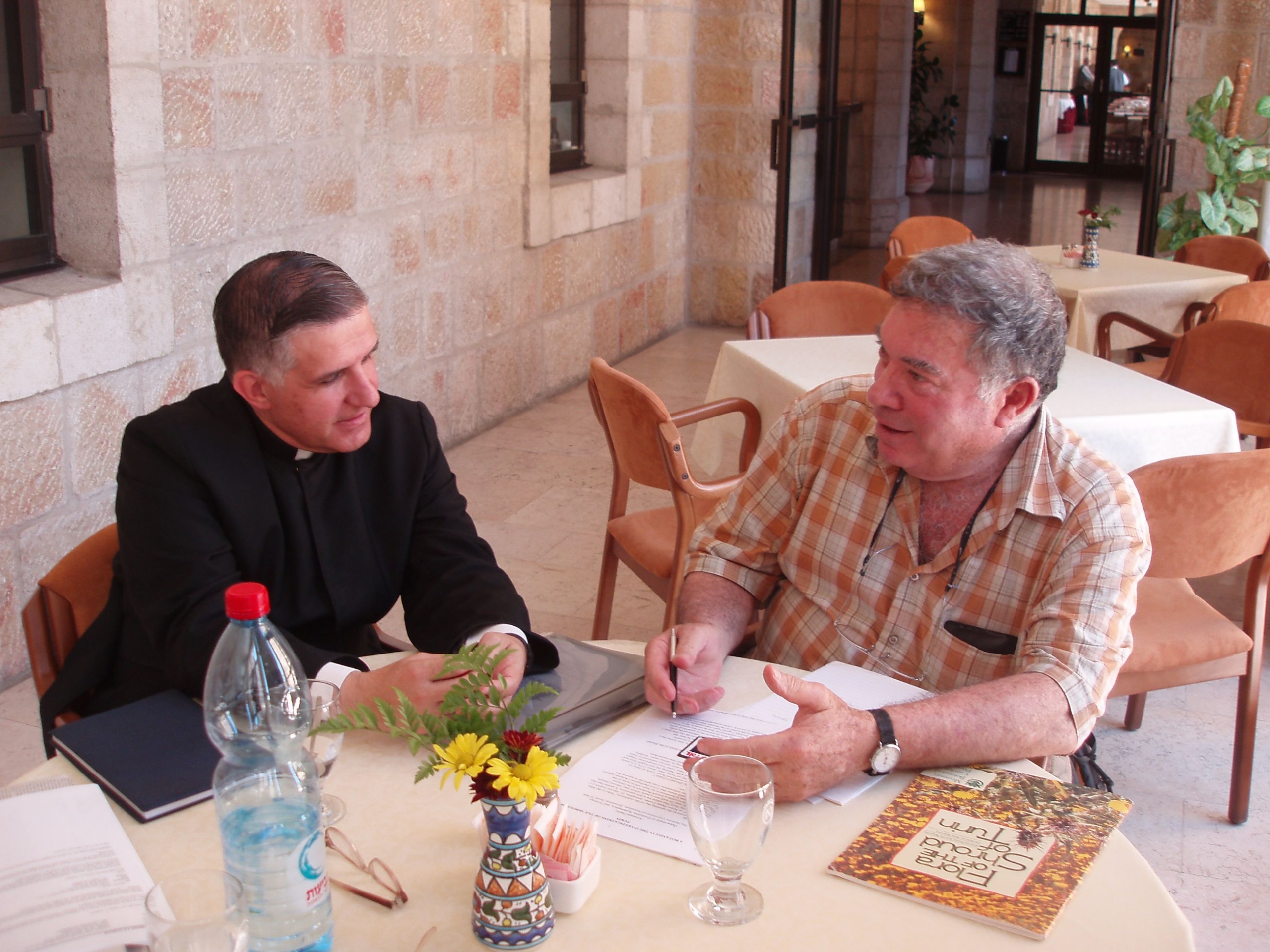 In 2008 a book interview was done by Father Hector Guerra L.C., that resulted in a book in Italian: “L’uomo della Sindone”. It was the first book of the series that followed, the English edition: “Botany of the Shroud” (2010), and the Spanish translation: “Flores y Plantas en la Sabana Santa” (2011).

(The DVD of the English version is attached if you are interested, it is a very well-written book).

Avinoam was also involved in the study of the thorns that were kept in different churches in Italy, and that supposedly had belonged to the helmet of thorns of Jesus Christ, and to compare them with his findings of the images of thorns on the Shroud.

During a visit to Israel in 2007, I met Avinoam Danin for the first time. We had a meeting in the Notre Dame Center and clicked immediately and that resulted in a close friendship, and also collaboration in research till his untimely death. I invited him to go with me to Raleigh, N.C. where we visited Tom D’Muhala, who was in the possession of the collection of photographs of Vernon Miller the Chief Technical Photographer of STURP in 1978. I had a series of the UV photographs digitized and Avinoam found new images of plants on these excellent photographs. We also went to the Netherlands to the Dutch Holographic Laboratory to do studies with UV-photography of plants and flowers that he had brought with him from Israel, to study the aspect of the wilting of these flowers and plants. We met again in Ohio during the Shroud Conference in 2009 and traveled together to the Botanical Gardens in Missouri to give presentations for an audience of many botanists. 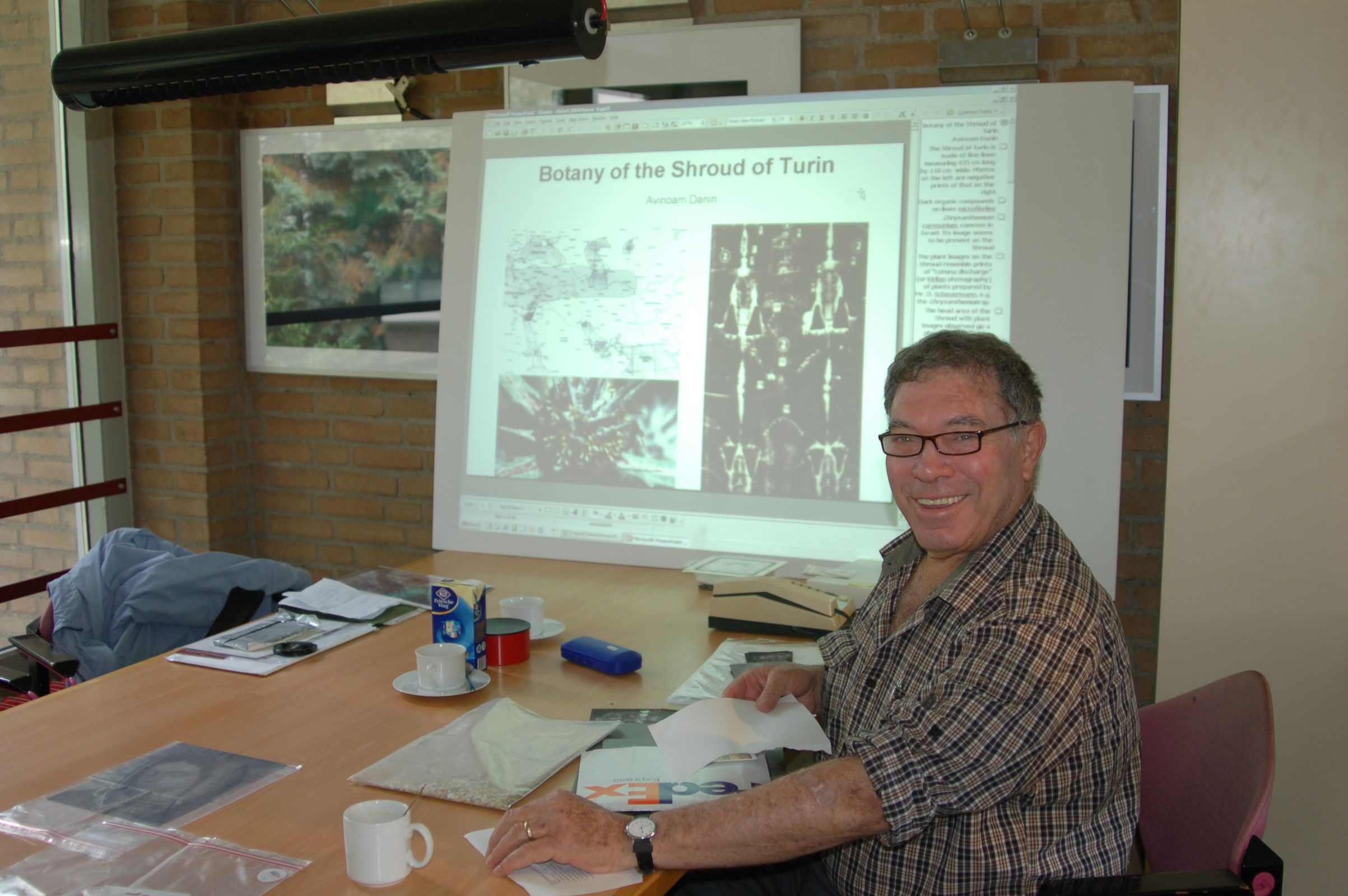 I would like to memorize also a botanical field trip that my wife Dalys and me made with Avinoam in Israel in the spring-time of 2009, traveling all over Israel, to collect also the plants that he had seen on the Shroud and we did botanical research on the Miller UV photographs in his office at his home in Jerusalem, followed by a nice dinner prepared by his wife Drora. Good memories!
USING HIS OWN WORDS WHAT HIS INVESTIGATIONS OF THE SHROUD MEANT TO HIM:

“Throughout my years of investigations of the Shroud, I had the pleasure of knowing interesting people and expanding my fields of interest. I lost many hours of sleep as thoughts about the meaning of my findings kept me awake at the oddest hours. I am often asked about my personal feelings concerning the Shroud and what surrounds it. I appreciate the beliefs of Christians around the world and I admire the expression “live and let live”. I have gathered much botanical information in my years of research and am happy to share my expertise and its application in Sindonology with those that are interested”. 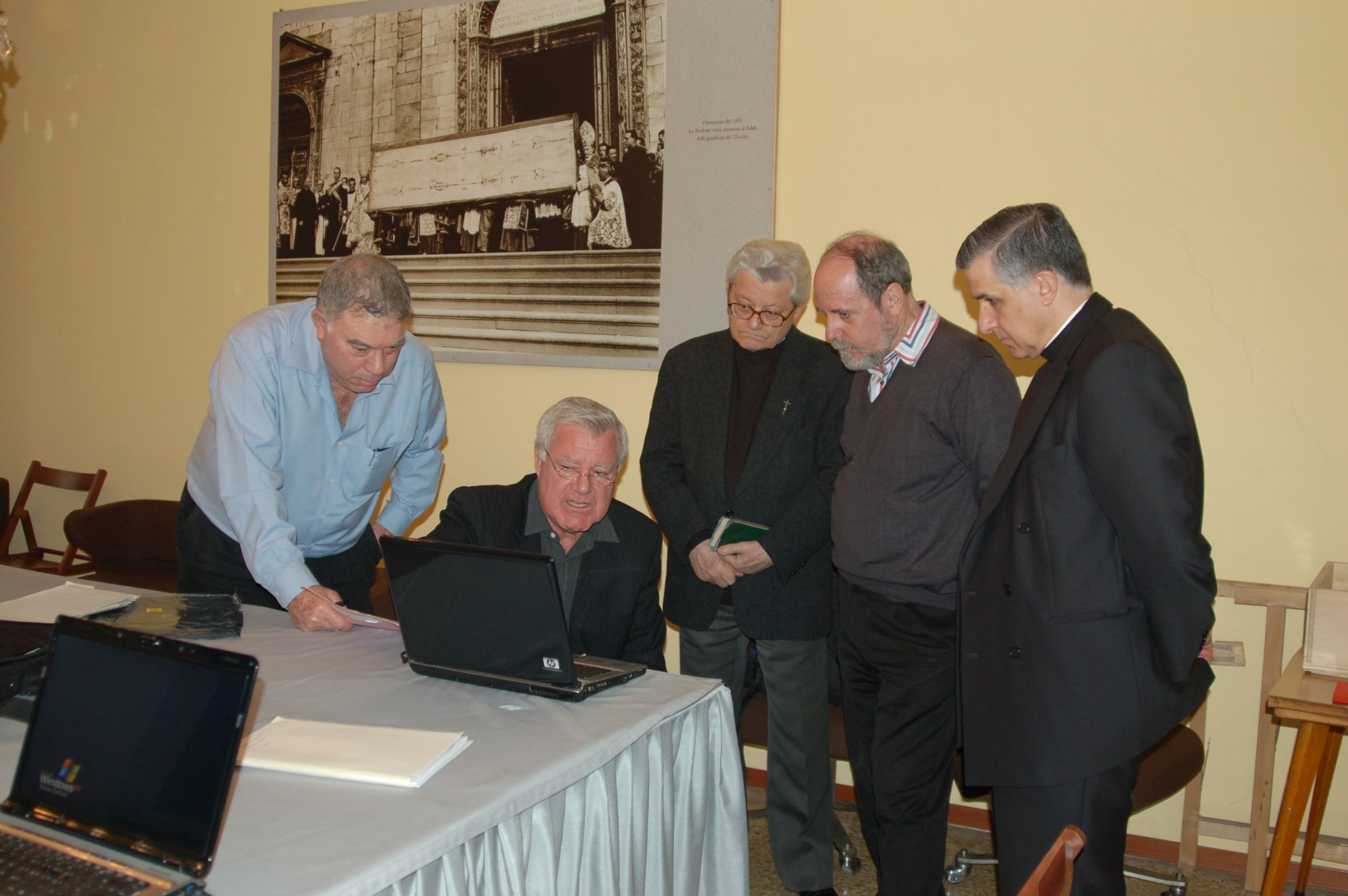 Following is a POWERPOINT Presentation named: “FLORA OF THE SHROUD OF TURIN”.
and a series of photographs showing the geographical indicators, a list of plants on the Shroud and their blooming times. 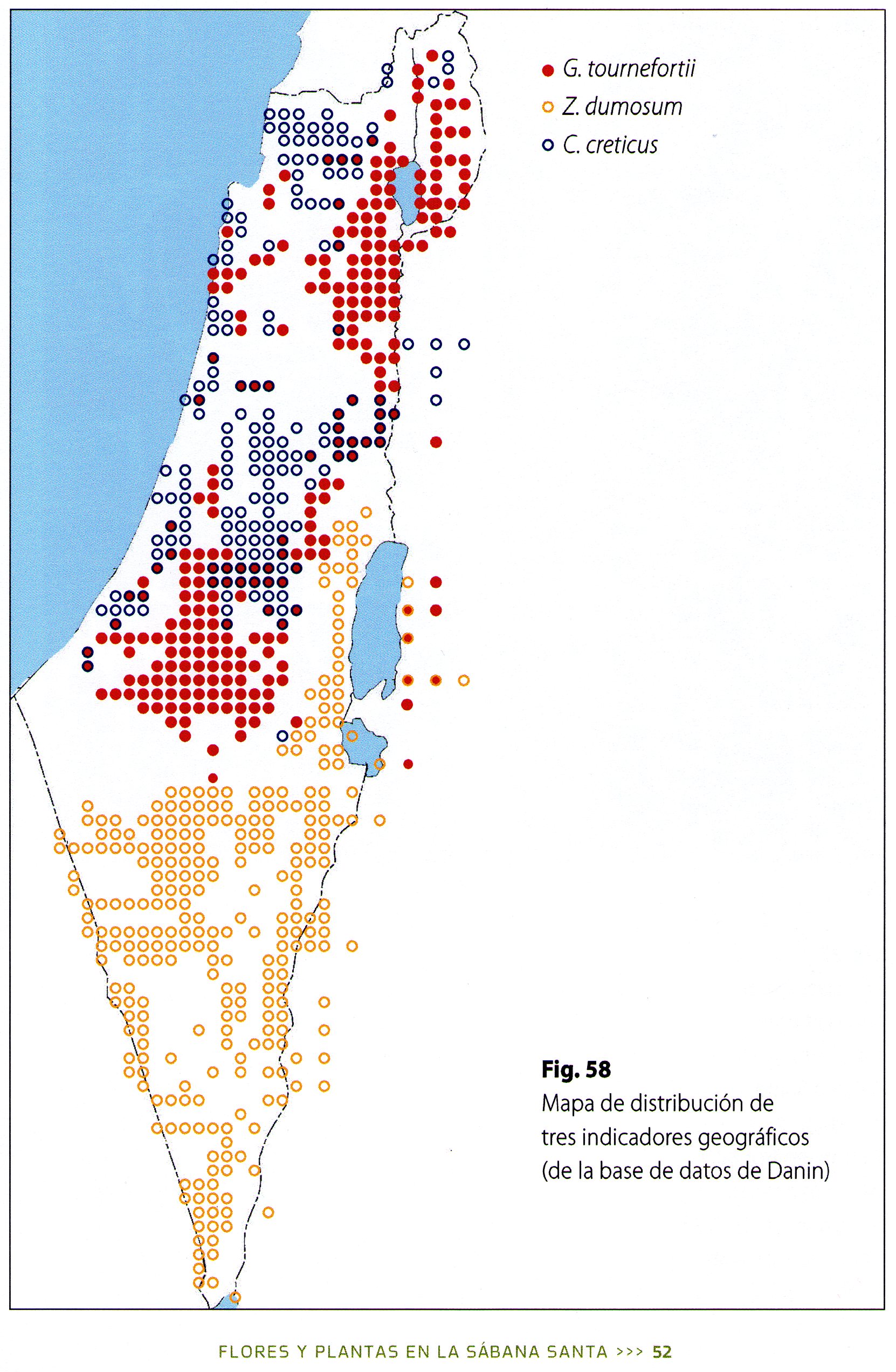 Click to see FLORA OF THE SHROUD OF TURIN