SUMMARY OF THE CONVERSION OF 2D TO 3D

The first conversion from 2D to 3D was done in 2005 with photographs of Barrie Schwortz, which Barrie took during the STURP investigations in 1978 (© 1978-2010 Barrie M. Schwortz Collection, STERA Inc.) and resulted in the first holograms of the face of 30 x 40 cm and the front and the back of the body, 30 x 60 cm. These holograms were used in the Grizzly Adams documentaries: “The Fabric of Time” and “The Case of Christ’s Resurrection”. The first series of conversions were based ONLY on the visible gray scale of the image, and showed many imperfections in the image, or image-less areas, specifically on the sides of the face and the front of the head, regions around the underarms and the hands and in the back image the sides of the upper legs and parts of the lower legs. These showed up in the converted material as “holes” and in the holograms as black areas without 3D information.

In November of 2005 I visited Barrie Schwortz in Los Angeles and showed him the holograms. His professional comment was that the 3D did not show up better than in the VP-8 Analyzer and that we had to improve a lot the 3D. But he also showed us a way of finding “hidden” information in the so-called image-less areas by employing the magnetic lasso tool in Photoshop and enhancing the image. That resulted in the discovery, that in the Enrie photographs that we used later, we could find indeed a lot more of information, for example on the anatomical left side of the face, the front of the head and other areas on the body itself, the legs and around the lower part of the arms and hands, and that resulted in the fact that we now had about 85 % of the image that contained from very good till low intensity image information. The image-less areas were now reduced to about 15 % of the total body image. In 2007, when we started to cooperate with Prof. Avinoam Danin of the Hebrew University in Jerusalem, we found also a solution why there was no information in certain areas, specifically on the front of the head, the right anatomical side of the face and around the hands and lower parts of the arms. He found flower and plant images in these areas and the presence of these flowers and plants seemingly blocked the formation of the image of the body in these areas. Identical basically to the blood images, because under the blood there is no body image either. It is good to remember, that there are 3 image-formation processes involved:
1) The blood that is visible on the Shroud of Turin was caused by direct contact (?) between the blood and the surface of the linen cloth.

2) The flower- and plant images on the Shroud. According to Avinoam Danin, these images show characteristics in the image that you also see in images formed by corona discharge.

3) The image of the body itself. Until now, science has not come up with a satisfactory explanation how the body-image was formed. Until now it is unexplainable.

In 2006 and 2007 Bernardo Galmarini produced new and much more sophisticated conversions of 2D to 3D of the face and the front and the back of the body, which resulted in a new series of holograms, anaglyph photographs and lenticular 3D images. He also produced movies where the image of the face and the body are moving from the left to the right side of the screen and they are very impressive indeed. The 3D, which was achieved now, was very impressive and the images now also showed much more detail. The technicians in the Dutch Holographic Laboratory did also very professional and good work improving the 3D qualities of the image in the years that followed.

Quite some people had seen the holograms and we found that they got very confused looking at these images, which was caused by the absence of the upper arms and these areas showed up as big holes in the holograms. As is known, the Shroud was severely damaged and the images of the upper arms were burnt during the fire in the Chapel in Chambery, France, on December 4 of the year 1532 and in 1534 patched in places that had burn damage, with pieces of 16th century altar cloth to cover where it was scorched and holed. These patches are also very disturbing in the holograms. 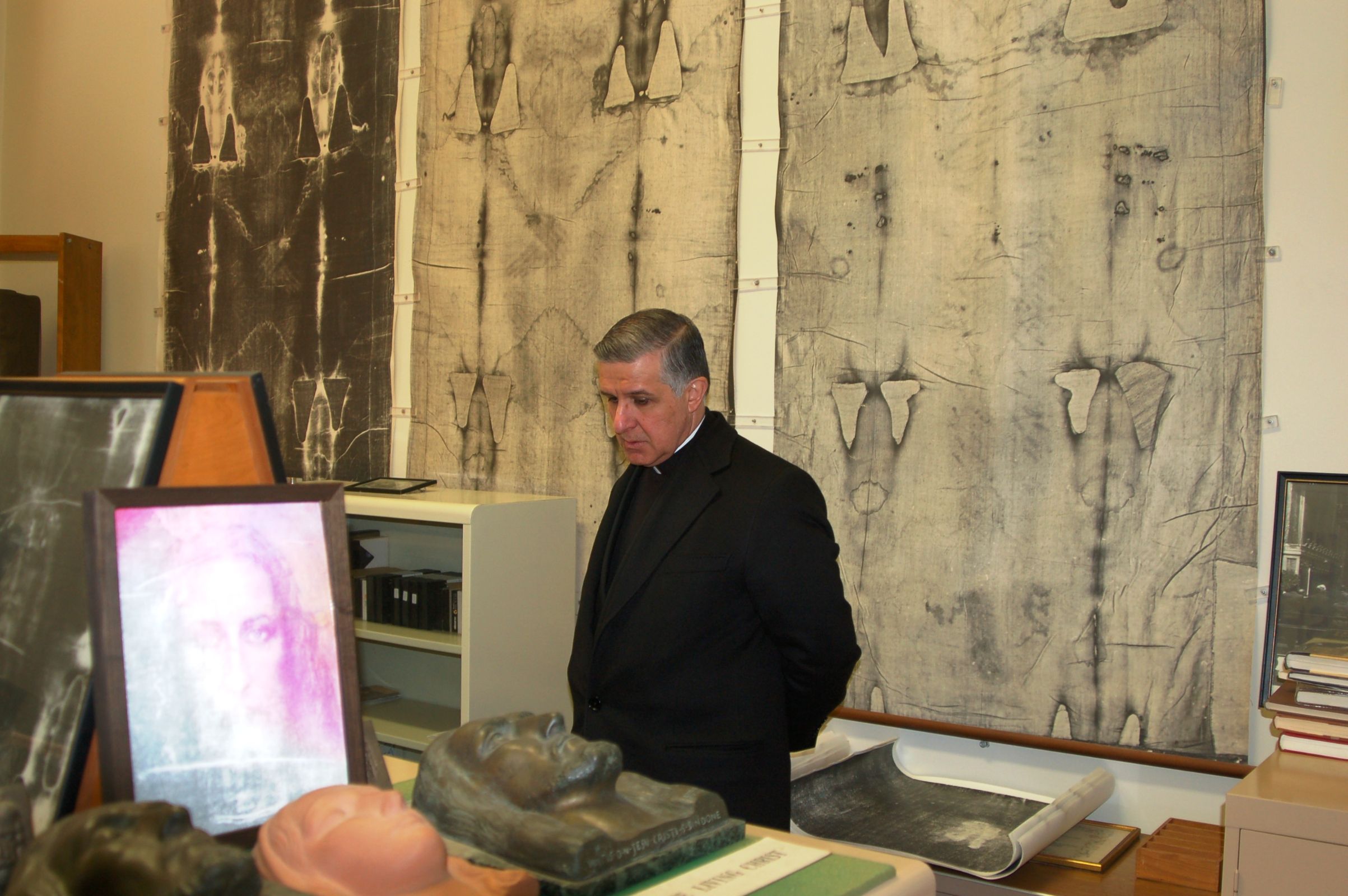 Since 2007 we were also helping Father Hector Guerra of the Legionairs of Christ, who had already opened up two exhibitions of the Shroud of Turin in Rome and Jerusalem, and he wanted to use the life size holograms in these exhibitions. We decided then to make an ARTFICIAL reconstruction of the missing upper arms but ONLY for these exhibitions, so people would not get confused looking at the big holes where the upper arms were supposed to be and the correlation with the areas where the patches on the side of the upper arms were visible.
So basically, there are three versions of all the 3D materials:

1) The scientific version, which is the one that is solely based on the gray scale information in the digitized photographic materials that we used. They clearly show the image-less areas as “holes” and these are the ones that we use and have used for scientific research. They are what we call the “SCIENTIFIC-3D version”.

2) On the other hand, we have the version that we talked about with the ARTIFICIAL reconstruction of the upper arms that are being used ONLY for exhibitions. We call this the “ARTISTIC- version”.

3) When we encountered the image less areas, Bernardo Galmarini decided to “restore” these areas. He filled in the areas with a very thin layer that was taken from the direct surroundings around these areas, but did it in such a way that an expert would always be able to see where and how this had been done. This resulted in the most perfect images of the Man on the Shroud and comes the nearest to an anatomical correct representation of the body. We call this the “SCIENTIFIC-artistic” version, as the 3D is based on 85 % gray-scale information and 15% on “softened” areas where we found the image-less areas.

This also answers already many of the questions that have been asked to me during the Q&A after presentations and also mails with questions that people have sent to me. 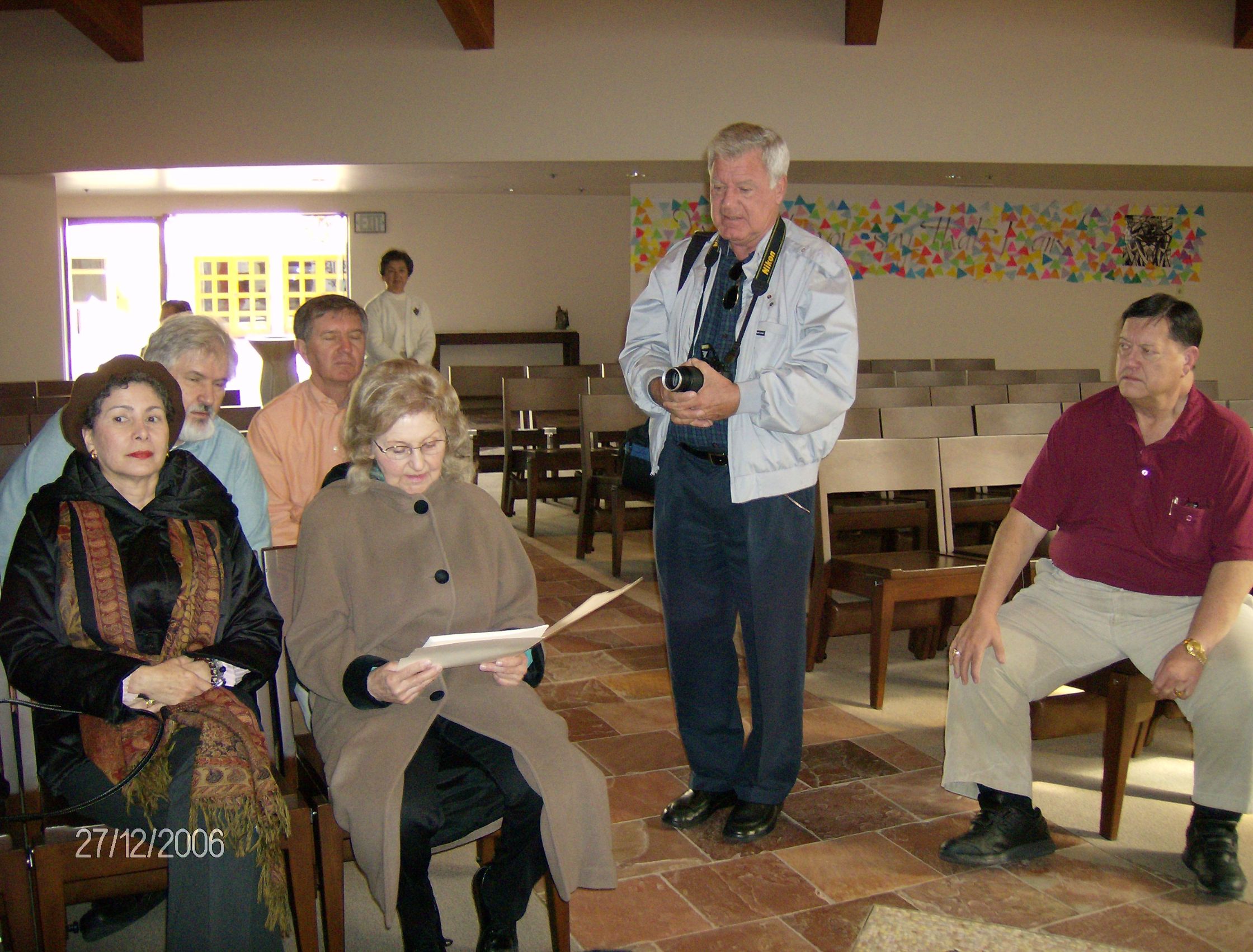 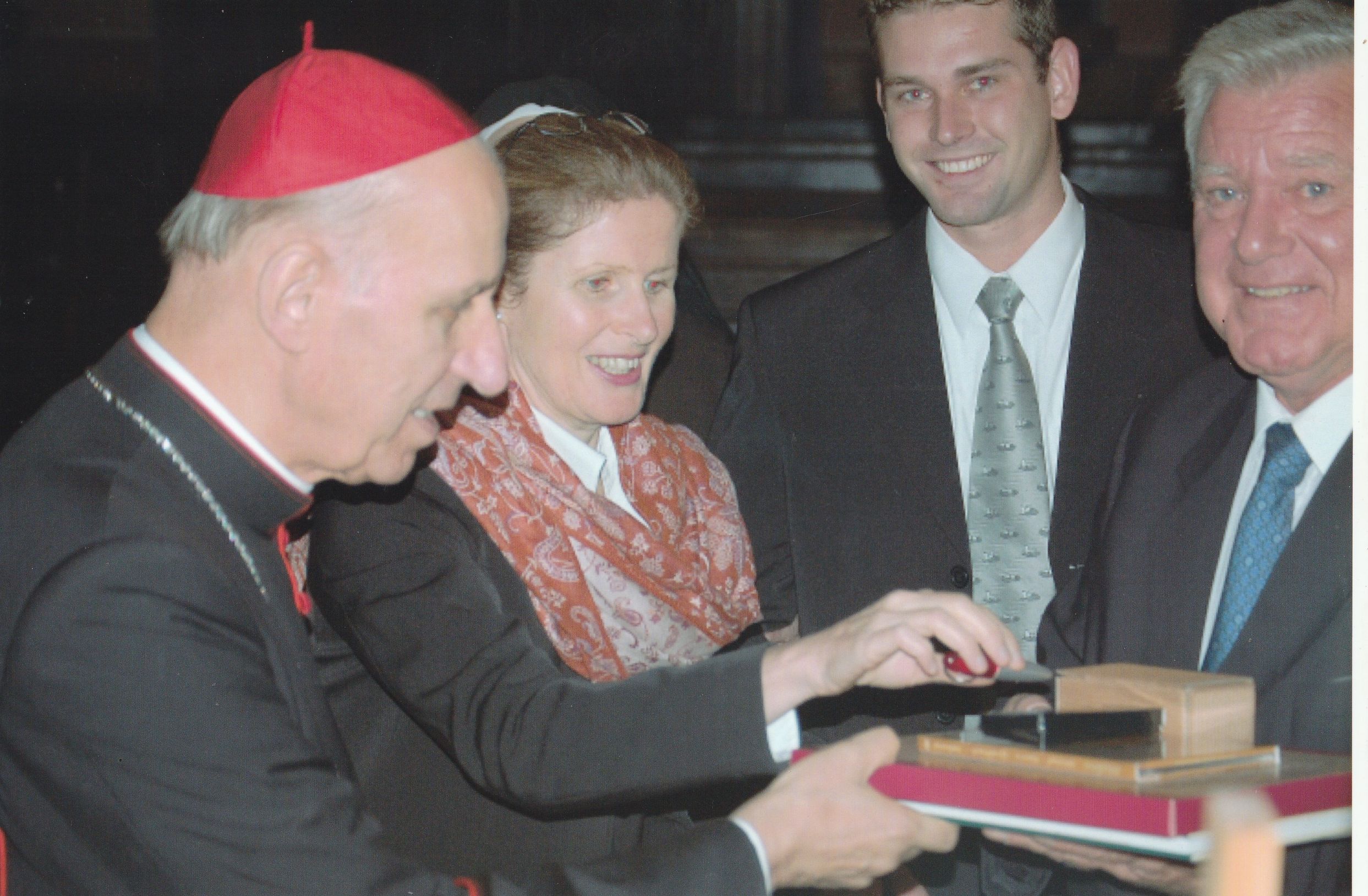 In November of 2006 MIKE MINOR, in cooperation with TOM D’MUHALA and ISABEL PICZEK of AMSTAR organized an audience with the Shroud Custodian, Cardenal SEVERINO POLETTO. Suzy Philips and Don Giuseppe Ghiberti in Turin set the date and we showed there, in the presence of a group of about 15 Italian Shroud scientists the results of our work, holograms of 200 x 100 cm (life-size) of the front and the back of the body each, and different holograms of the face. Cardenal Severino Poletto decided then that a set of the life-size holograms would be placed in the Museo della Sindone in Turin and many people have seen these holograms during the exhibition of the real Shroud in May/June of the year,2010. 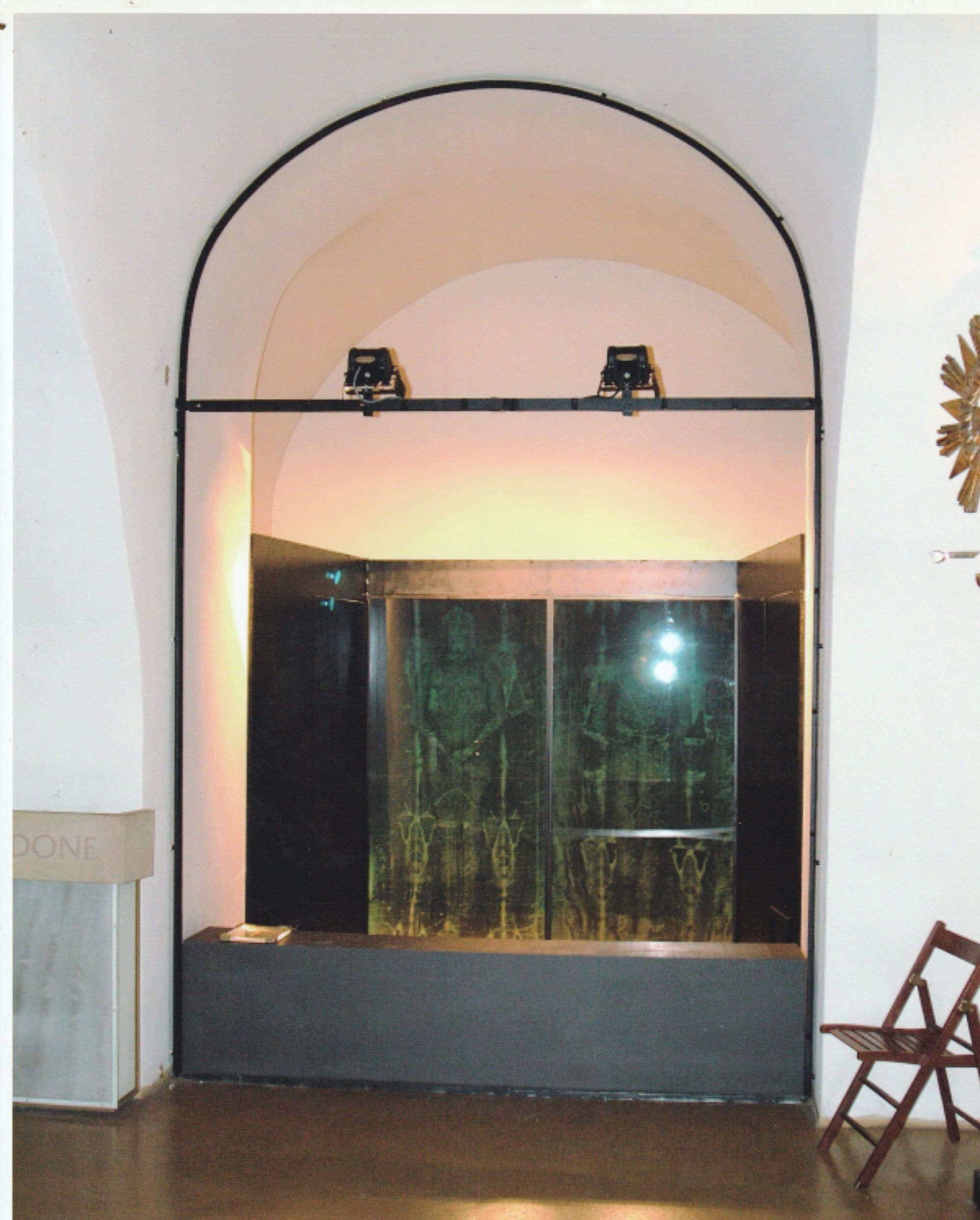 The next 4 photos shown here are some of the converted materials which were used in the Dutch Holographic Laboratory, to create some of the holograms.

Photo 1) is a photograph of Barrie Schwortz of the face (© 1978-2010 Barrie M. Schwortz Collection, STERA Inc.). This was the first conversion and shows very clearly the image-less areas on the right and the left side of the face, following downwards the band in the linen.
(The next photographs 2 and 4 are Anaglyph, use 3D glasses).

Photo 2) and Photo 4) are based on photographic material of Giuseppe Enrie, and show the improved versions where we can see that on the left anatomical side of the face there is much more gray-scale information and also “softer” details in the face. 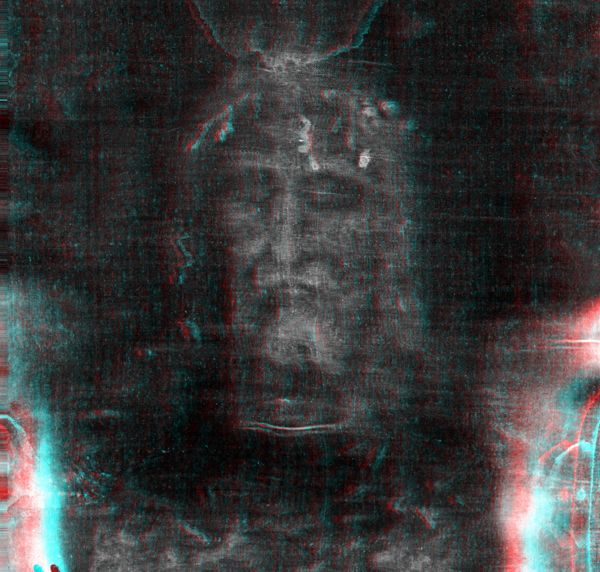 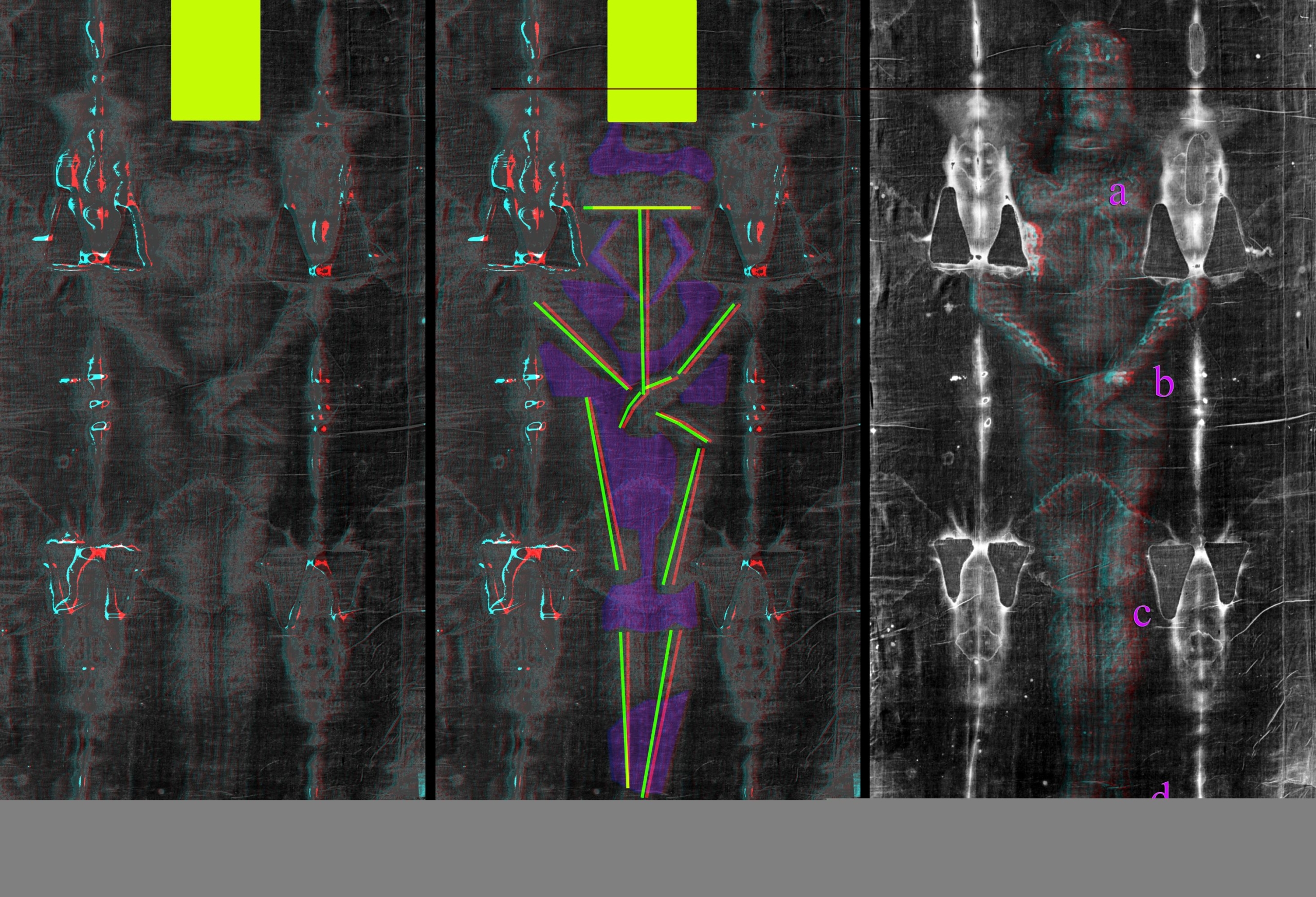